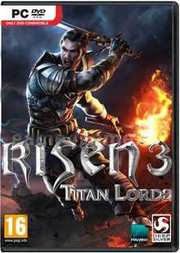 Risen 3 comes after the rather lacklustre reviews and feedback for the pirate-themed second release in this franchise, following on from the Gothic series of RPG’s released by Piranha Bytes studio, and released by Deep Silver. I think that it’s fair to say that from the initial opinions voiced on the Steam forums that expectations were not exactly high, so what is the reality? 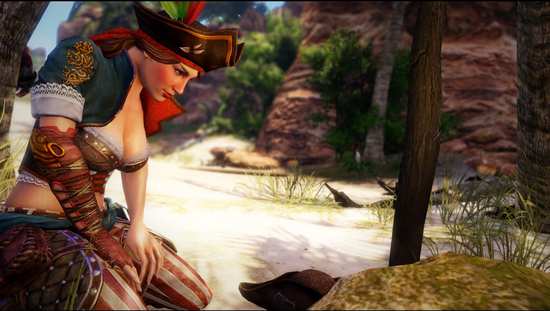 Risen 3 finds our nameless piratical hero on a mission with sister Patty on Crab Island seeking treasure. A wrong turn and a short sojourn through a cave finds the two at a mysterious crystal portal through which a Shadow Demon steps through and kills our hero, which is a great start to our adventures. After Patty buries him on the beach and buggers off to find out who gave them duff info, a rather strange bloke called Bones digs our hero up and brings him back to life. It turns out that the Shadow Demon has stolen his soul and in order to gain his life back, he must journey the Southern seas doing all sorts of quests and generally killing lots of strange creatures in order to regain his soul. 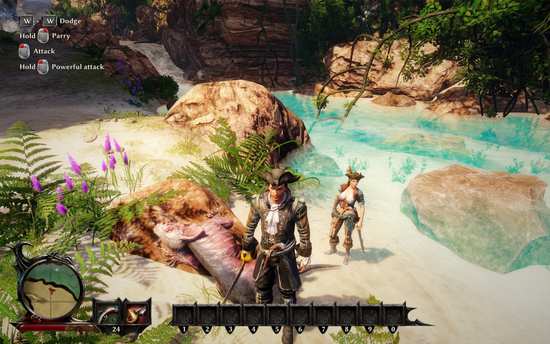 So Risen 3 is an RPG game, shown in the third person, and is a rather open world game environment in that it allows you as a player to wander the gaming world in any order or using any path you can find, picking up and completing quests in any order (some you may even complete before you even get them depending on who or what you encounter on your travels). The game is designed to be keyboard based, with numerous keys to command movement, combat and magic but luckily is also designed so that the player can also use a 360-type controller as well. This is great for me as I now prefer to play PC games with a controller for virtually all types bar FPS games. There is a slight downside to this though in that you must have the controller switched on prior to firing up the game in Steam or the gameplay options will forget that you’ve already picked the controller as method of control and you’ll have to set it again. A minor inconvenience, to be sure, but nothing more than a trifling annoyance as I’ve found I can do everything I need to do in-game using the controller (which is just as well as using a controller completely shuts down the keyboard). 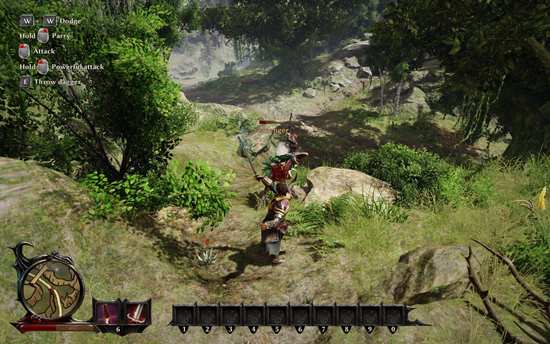 Combat is hard at first, as it should be if you think about it, using a very simple dodge and strike system with variations on strike strength by holding down the relevant key for differing lengths of time. Your weapons are very basic to begin with as well, so you will die an awful lot at the beginning of the game and need to save constantly. Alternatively, you can just run away if you feel the opposition is too strong for you, with varying degrees of success. Luckily you can call on help from one of a number of companions you pick up along the way, the first of which is the aforementioned Bones. Travelling as a party, you can only have one companion with you at a time, you find that your combat is a little easier as the focus isn’t always on you as a single combatant although you may also recognise the need to turn down the difficulty level in-game to make it that little bit easier. As you progress you will come across a wide variety of creatures, some much more difficult than others. 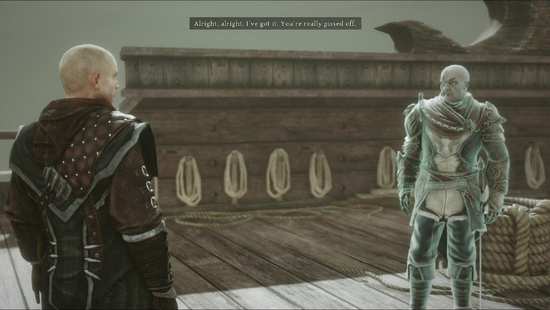 There is an awful lot of loot to collect on your travels, some in the open and some in locked chests. For those chests without a specific key (the majority), there is a rather simple lock pick mini-game you use to gain entry but you need to ensure you have the relevant Dexterity characteristic high enough as there are different levels of locks or you will inevitably find yourself either ignoring them in frustration or having to remember where they are so you can travel back later. You’ll also find yourself sometimes gaining unwanted attention if you try and steal items in the presence of their owners, although a defeat in combat merely leaves you unconscious and having lost some Glory points, which is the currency you use to boost your skills (gained after a successful kill, even the 11 points you get for killing each rat you find will soon add up). You will however find a variety of items both consumable and weapons that you can use or trade as you see fit. Some items are outside of your reach but luckily very early on you gain the use of voodoo dolls that allow you transform into a parrot to reach some of those more inaccessible places, although your ability to gain height in flight is limited so you need to be careful not to waste it. 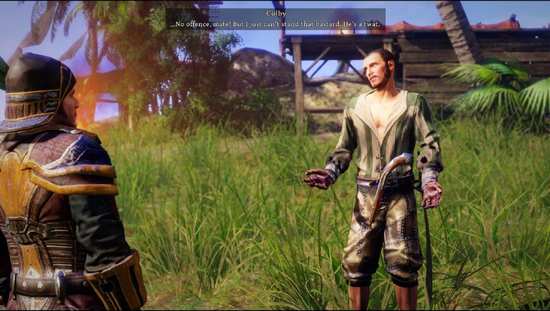 The major turning point of the game is where you need to choose one of three factions in order to move to the next phase in the battle for the Southern seas: Guardian mages, Voodoo Pirates or Demon Hunters. Each faction has its own distinct style and weapons/magic and unlike Skyrim, for instance, you can only join one faction and that decision holds for the rest of the game. You can still do quests for these factions after joining another, but faction specific skills are locked to you from that point. I guess that this is to encourage a second and third play-through in order to experience everything the game has to offer. 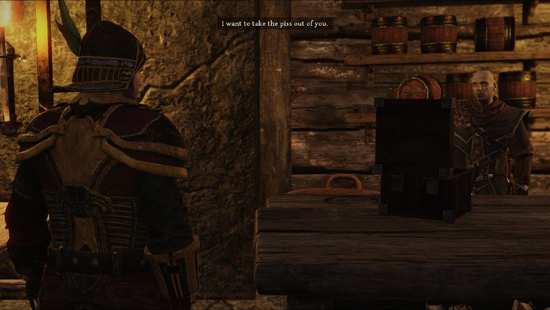 There are a couple of problems in the game, such as the controller issue mentioned above and also some frame lag every now and again. Other people have mentioned issues with the combat, which can be rather frustrating at first but then can get rather easier as you pick up better weapons and skills. Some also don’t like the use of a dodge mechanic as you could in theory just roll away from your opponent endlessly to avoid being hit, but this is vital in the beginning – especially if you can judge correctly when your opponent will attack (and be aware that if they hit you once, they are likely to hit you at least once more, maybe twice).  There is also the subplot involving the Shadow dream world when sleeping that doesn't really seem to do that much, although that may pay off much later. 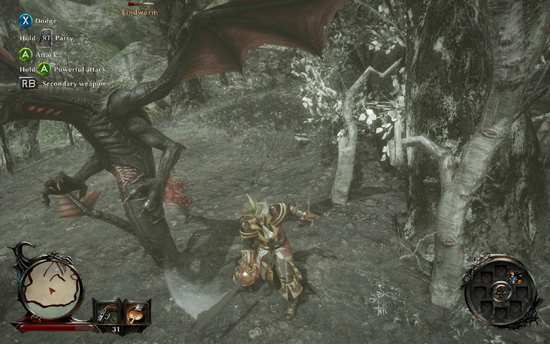 One word of caution, the protagonist in this game is a rather sarcastic individual with a nice line in swearing, as some of the screenshots I’ve uploaded can attest. I found this quite amusing but some of you may not find it as funny as I did. Oh, and the voice acting is quite good with an option for subtitles to be displayed, which I now prefer as a default on games that are heavy in dialogue. 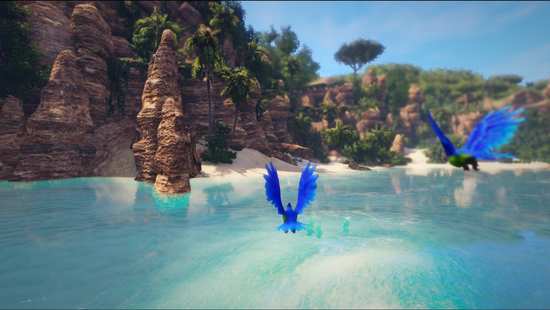 I’ll be honest, I’m not normally an RPG player, the nearest I’ve gotten is the 65 hours on Skyrim and therefore it was a bit of a risk to pre-purchase this on Steam for £40 but I’d seen a couple of YouTube videos and something just attracted me to it. I don’t regret it either, as I’ve really immersed myself in this game, currently at 38 hours and knowing that I've barely scratched the surface. There are some on Steam who reckon that they’ve completed the main quest in 20 hours but I never understand this impulse to complete games the quickest as there is so much more built into them these days and you can get so much more value out of them if you experience everything the developers intended rather than just follow the main storyline. 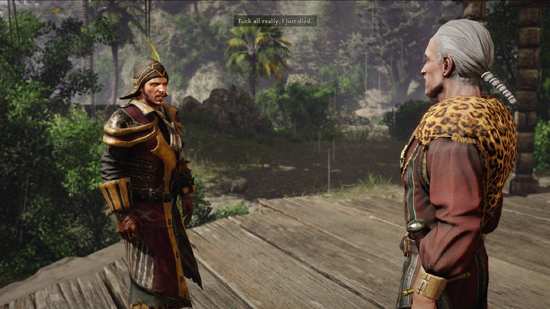 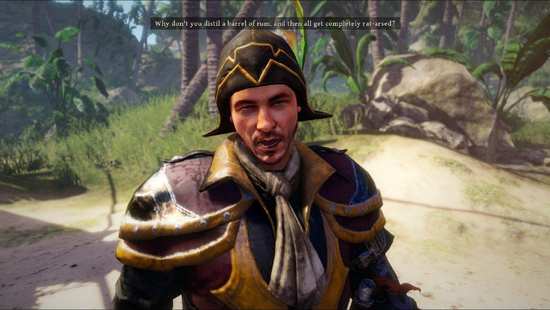