Article
Bring your ideas to life for novels, theatre, television and films!

If you are in the market for a new internal DVD writer, then you might want to consider the new LiteOn iHAS524. Described as the world's fastest drive, this SATA unit has a few interesting selling points, including LabelTag which adds readable text to the data side of any writable CD or DVD, SmartWrite which is sort of overclocking for DVD-R/+Rs, and SmartErase, a method of rendering discs unreadable. More on those later.

Having a not too distractingly logo plastered black front, and a quite short form factor, this 5.25" unit should sit neatly in even the smallest of PC cases, I'm sure those with shuttle PCs would like the fact it only sits 17cm deep. Being SATA, connectivity is easy providing your machine isn't from the dark ages, also Windows XP onwards will require no drivers. A cable might not be supplied, but screws definitely are, as is a copy of Nero Essentials 8 which should sort you out with everything you need

Alas my freeware software of choice, CDBurnerXP, doesn't support LabelTag, but Nero installed fine on 64 bit Windows 7 and so far has not angered the PC gods in quite the same way earlier versions managed to. The software also includes various things for making your own DVDs in addition to burning data discs, but if none of this suits you and living without some of this drive's specific features is acceptable, then there are plenty of other alternatives you may already have or wish to try.

Let's get this one out the way pretty quickly, you aren't going to use this very much for two reasons. The first of which is it makes seeing the labels actually quite difficult, this isn't even remotely like the sort of fancy holographic CDs you might have seen on commercial releases. However perhaps if you wanted to send out material and force a copyright line or contact details around the outside, then maybe it could be of some use, just remember it is difficult to read. 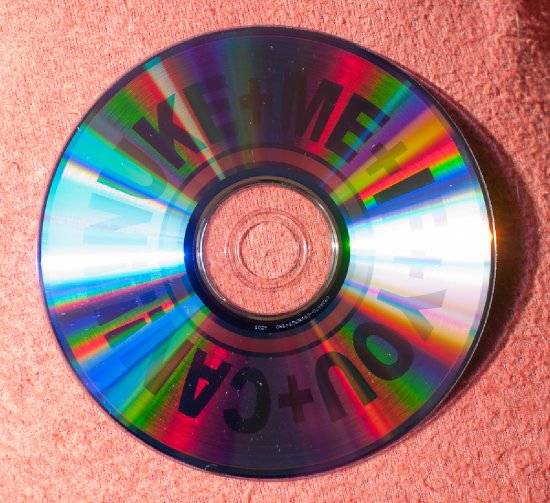 This works by writing multiple sessions to the disk, firstly the main data as a session, after which it begins to burn the LabelTag as a second. Because it takes up space, it will reduce the capacity of a CD-R from 118MB upwards depending on how thick you make it, and for a DVD-R that shoots up to 546MB. When we tried to burn a LabelTag onto a CD-R it took absolutely ages, and appeared to have a blank text-less ring after it. Perhaps it just doesn't like CD media for this kind of thing.

A DVD-R took about 8 minutes to burn a label, which was definitely there afterwards but still only actually readable if you angle it to the light correctly. As a side note, you can use almost all of the data area for a label if you wish to write big fancy lettering that requires the right angled light. Anyway, moving on... 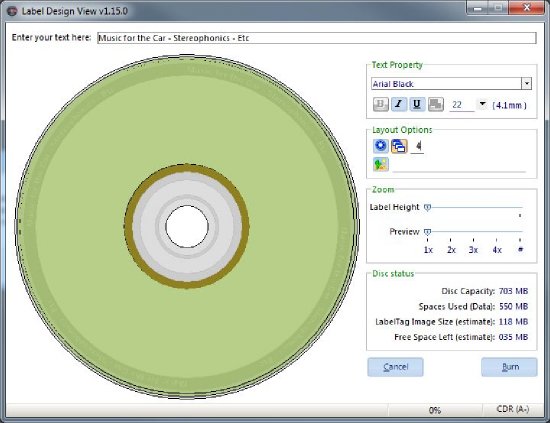 The iHAS524 can write DVDs at 24x, the trouble here is finding anyone that sells media of this speed. When DVD-Rs first came out, the speed war began at 2x and rapidly increased to 4x and then 8x rated media, but things have pretty much peaked at 16x. However the SmartWrite feature of this unit claims to be able to push some DVD-R and DVD+R blanks that are rated for 16x, so they can be written at up to 24x. Certified 16x media apparently can be pushed to 18x, with only the highest quality capable of matching the 24x claimed.

What I have lying about the office is DataWrite Titanium 16x DVD-Rs and DVD+Rs, representing perhaps not the completely cheapest thing money can buy, but a likely match for what most people who buy in bulk will have lying around. The question is how far can this unit push the stuff? For the claims it is making, providing you read the small print and not get sucked in, 18x would be a reasonable achievement, so let's give it a go shall we?

First up, it wrote a 52x rated CD-R at 48x, and oddly enough it never quite got to that speed reading back the data for verification. As for writing a 16x DVD-R, well this averaged out at 7.5x speed, far less than the rated media and way below the marketing claims of pushing it to 18x-24x. Conducting exactly the same test with the same branded media, but DVD+R instead of DVD-R, resulted in initially much the same speeds although this time the write speed continued to increase and maxed out at around 16.22X. 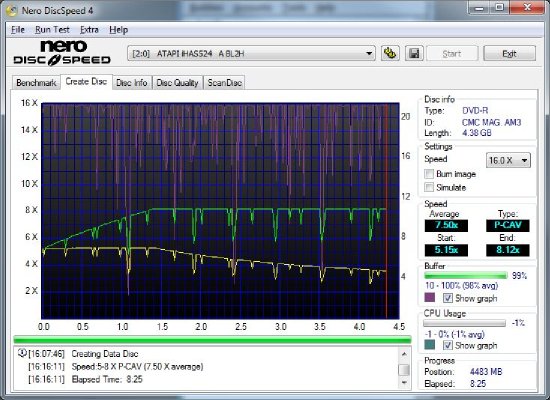 Maybe with more expensive media this would all work as advertised, but with the sort of bulk purchases heavy users make, don't hold your breath too long. It does appear to do its best in maintaining the fastest write speed it can on a media by media basis. 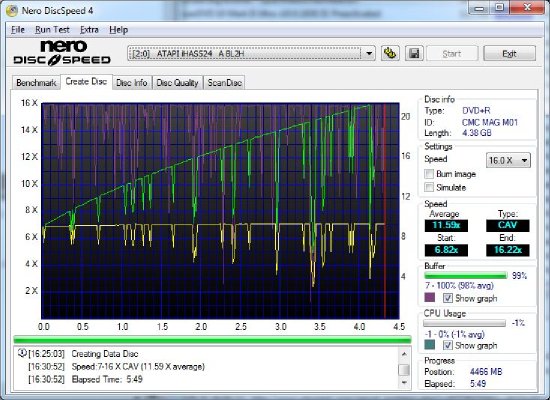 This is a tough one to cover, trying it on a few bits of media, from old CD-Rs to recently burned DVD-Rs, it appears to do what it says it does. However without an electron microscope, a lot of time and more knowledge than I possess, quite how secure this makes the act of throwing away media containing important documents, I couldn't really say. The LiteOn website has some more information about it that might be worth a read.

How long does it take? We made a DVD filled with an overly large LabelTag message with the strange notion that wiping the entire disk would make that completely unreadable to the naked eye, but all it did was take absolutely ages doing nothing but nuking the first data session, leaving the text in tact. That is a bit worrying, but could perhaps be to do with LabelTags not being proper data.

Next up was a DVD-R with mostly data, combined with a small LabelTag surround, again that got to the same 83% as before and then took ages not erasing that bit. However the moment I erased a disk without a LabelTag on it, the 83% went much faster. Quick Erase is of course not too slow, but then that will just destroy the contents areas and not the actual data, so good forensics would probably be able to retrieve the data back. 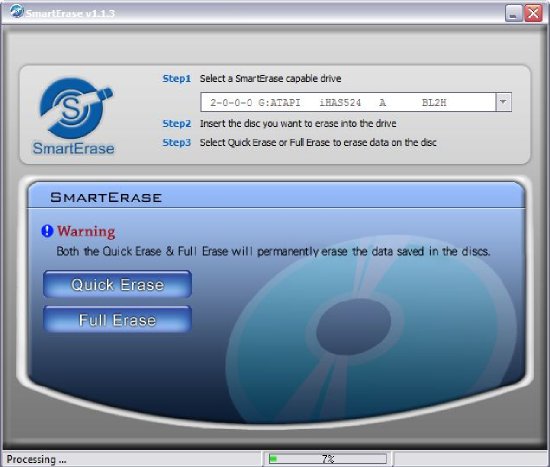 It is a shame to find the utility that does this you have to rummage a bit in the Nero StartSmart Essentials interface, with the icon under the Rip and Burn section, not the most logical place. But the act itself was easy enough, even if it is rather all interface and little trousers.

If you are worried that media age has an effect, then don't panic too much. We took a very old Samsung CD-R which was still readable but well over 10 years old, and erased that without issues. You have no idea how many old ones we found that were unreadable already though, it just shows you media isn't meant to last forever.

Wow, they named a feature after Michael Barrymore, he must be thrilled. This bold marketing claim states that you can use this writer with any media you like, from CD-R, CD+RW, CD-RW, DVD+R, DVD-R, DVD+RW, DVD-RW, DVD+R DL, DVD-R DL, even DVD-RAM. At first glance it gives you the impression that any media will work, however it might be worth noting that really it states any media type should work with this unit, which is perhaps not the same thing as any media from any manufacturer. Some players in the past have struggled with specific blank media from specific manufacturers, but these days are hopefully so far behind us now that it shouldn't be an issue anymore.

Though don't expect that stack of bad DVD-Rs you never could get working properly with your old drive, due to a high fail-rate, to suddenly work miraculously with this one. This is not what it is promising.

Reviewing drives can be a difficult thing, you can check out the manufacturers claims to a certain degree, and you can check read and write speeds. With the speed of the technology slowing to a crawl, the land of the DVD writer isn't going to change much over the coming years (prove me wrong World, prove me wrong!) and many buying a unit now will expect it to serve them for quite a while. Probably the most common items moved from one PC to another when upgrades are made include your optical drive, there is simply rarely a reason worth changing them for.

That said, you need to consider carefully what you require of your unit. If you want to buy special media and print on the front of your disks once your data has been burned, then a LightScribe or LabelFlash unit might be more appropriate. However if printable labels are more your thing, or writing on them with pen, or you don't mind waiting the (loooong) time it takes to write a LabelTag and the loss of data space doing so encompasses, you could do far worse than buy this unit.

It is after all very nicely priced, and Super AllWrite! Er... groan... sorry... I'll get my coat.