Review of Batman
added by
Jason Newington
Places to Buy 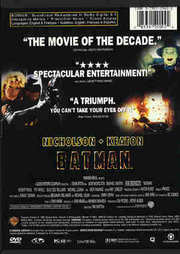 Back Cover of Batman

DVD
Witches of Eastwick, The (US) 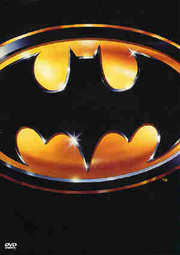 Synopsis:
After a young boy witnesses his parents` murder on the streets of Gotham City, he grows up to become the Batman, a mysterious figure in the eyes of Gotham`s citizens, who takes crime-fighting into his own hands. He first emerges out of the shadows when the Joker appears -a horribly disfigured individual who is out for revenge on his former employer and generally likes to have a good time, but the identity of the `bat` is unknown. Perhaps millionaire Bruce Wayne and photographer Vicki Vale have a good chance of finding out?

What i think about batman
When batman arrived it was a huge hit allover the world, if i remember right.i was collecting batman cards with my friends and i actually saw the real batman car.i can tell you that it was a legendary year.many other great movies was released on the same year, like last crusade, ghostbusters 2, back to the future 2, born on the 4th of july and many others.the year 1989 is maybe the greatest movie year of alltime.batman is one of the best movies of late 80` and one of the best movies ever.it is absolutelly the best batman movie and the only dark batman with excitement and super great actors.michael keaton plays his role as batman very well and he`s the only true batman.keaton was also in burton`s earlier movie called beetlejuice, maybe that`s why he had the role of batman.jack nicholson is the joker and he makes maybe the greatest job in the movie.nicholson has just born to be the joker and you can really enjoy his acting.in this movie you can really see why jack nicholson is one of the greatest actors in the world.other actors are also good and i`m glad that they had a role for jack palance, who is very good actor with experience.billy dee williams "lando carlissian" was a good suprise for the movie, but he had only a little role in the movie.the batman is directed by tim burton who is ofcourse one of my favourite directors with lucas, spielberg, mctiernan and carpenter.tim burton is known from a great movies like edward the siccorhand, beetlejuice and sleepy hallow.i would say that batman was the biggest hit of burton`s career and the only batman movie which came a legend.burton started the legacy of batman movies and he was the only one who knew how to direct batman movies even the sequal wasn`t so good.music is composed by danny elfman as usually and he makes a wonderful work.he can really make interesting and emotial composing, just unbelieveable.one of the strongest elements of first batman movie is it`s unic feeling of darkness.movie is very dark from the beginning to the end and i just love it.i was really disappointed, because the sequals were so poor and they didn`t have the same feeling.anyway batman is great movie, with story, actors and everything.everybody`s should see this movie.

The transfer
Batman dvd is presented in dolby digital 5.1 and it sounds very good as in many dvd movies.i didn`t notice anykind of errors in the sound and it was clear as ice.music can be heard loud and it finally takes the feeling to the top.with these kind of reasons i`ll have to give full points for audio.then what about the video and picture?it is very sharp and colors are fine.it just sometimes looks a little bit too dark, just like in robin hood.i don`t know, maybe i`m too hard judge.one of the good things in batman dvd is that you can choose widescreen or fullscreen and i think that all dvd`s should have this option.main thing is ofcourse the widescreen.then one thing that bothered me the most was that there was no many special features, but luckily there was something.quite good cast biography, nice scene access, production notes and film flash.tim burton, michael keaton and jack nicholson could had made the audio commentary, but it seems that they didn`t had thought about it.there is three languages and many subtitles.finnish version was a good success.there`s nothing suprising in menus, only a few pics from the movie and that`s all.even extras are worse the movie is great and it saves the batman dvd.if you are a fan of batman you should buy this dvd at once, because it`s great to have it on your shelf and you won`t regret when you`ll buy it (well i didn`t regret).
posted by Hamill82 on 29/12/2000 14:00
7 / 10

THE MOVIE: Batman is probably the best movie by Tim Burton, and easily the best picture of 1989. Michael Keaton is by far the greatest Batman and Jack Nicholson deserves an academy award for his performance as the Joker.
PICTURE: Anamorphic 1.85:1.
For one of the first DVDs ever released, Batman sports an anamorphic print and looks very good. Perhaps not the best picture by today`s standards, but exceptional for a 4 year old DVD.
SOUND: Dolby Digital 5.1.
Very immersive. Again, not the best quality by todays standards, but great nevertheless for a movie of this age.
EXTRAS: What are those, then?... you can imagine the DVD authors saying. Cast and crew bios and production notes. Hardly a 2-disc set...
OVERALL: A nice movie on a poor-by-todays-standards DVD.
posted by Richard Knowles on 11/8/2001 00:43