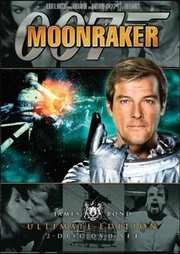 DVD
Spy Who Loved Me, The: Special Edition (James Bond) (US)

Moonraker still remains as one of the biggest Bond box office hits, but as ever, being a massive hit at the box office doesn`t guarantee you a quality film. In fact I`m going to stick my neck out, because in my opinion this is one of the worst. It strays so far away from what Fleming had in mind, and was just a cheap attempt to cash in on the popularity of other films.

Yes there are some good stunts and action set-pieces, but then there are also the laughable bits with Bond`s arch-enemy Jaws, some very unsubtle humour along the way and of course the whole space thing. It just doesn`t work.

This is the another of the new "Ultimate Editions" from Sony - I`ll try and highlight what`s different between the ultimate editions and the original DVD releases.

Whatever else I might think of the film, it`s pretty good visually. We have a new 2.35:1 anamorphic transfer, which has plenty of detail and looks good on the whole. Another good effort overall and definitely a big improvement on the previous release.

As with many Bond films, there are some great sets and great locations on show here, and despite being a bit rubbish story-wise, some of the "in space" shots are very good for the time.

Another Bond film, another DD5.1 soundtrack - and it`s pretty good on the whole, but doesn`t really come to life until towards the end of the film when we go into space. Dialogue is clear throughout and never gets drowned out by any other on-screen action. This DD5.1 mix and the dts mix sound like new versions, not just copied and pasted from the previous release.

For the third time, Shirley Bassey performs the title song, "Moonraker". But unlike the other two (Goldfinger and Diamonds Are Forever), you probably can`t even remember it unless you`ve just watched the film.

Another Bond DVD, another set of extras. The original DVD was not as impressive as some of the others in the series.

First up we have the obligatory commentary track featuring director Lewis Gilbert and others. This is another informative and interesting Bond commentary, and at least it gives you a reason to watch the film again.

New to this version is another track recorded by Roger Moore, which is a fun recollection of various things about Bond.

The best extras on disc two are probably those from the original release:-

"Inside Moonraker" is another quality behind the scenes documentary, excellently narrated by Patrick Macnee, and "The Men Behind The Mayhem" concentrates on special effects, and is also interesting. Also from the original disc is the original trailer and a photo gallery.

New for this release are the following:-

Production films are just that - some behind the scenes stuff featuring locations, sets with some narration from Ken Adam.

There`s also some storyboard sequences as well as the usual Interactive Guide.

I`m afraid that Moonraker is a bit of a stinker.

Yes, there are some nice action scenes and some good special effects, but there are so many better Bond films. A Bond film is not just about gadgets, chases, nice locations and stupidly named characters (Holly Goodhead wouldn`t sound out of place in an episode of Beavis and Butthead).

For a really good Bond film, look elsewhere. But if you are a fan of this one, then this disc is a good purchase, with the almost predictable good picture, good sound and good selection of extras. Recommended only for fans of the film or those of you looking to have a complete Bond collection on your shelf. It`s better than the original release from a technical pont of view, but it`s still a terrible film.