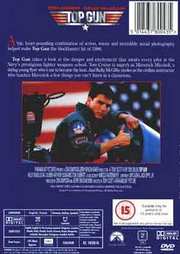 Back Cover of Top Gun 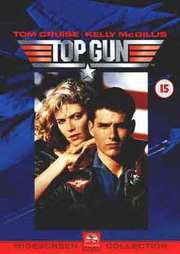 Up there with the best of the best
Certificate: 15
Running Time: 105 mins
Retail Price: £19.99
Release Date:
Content Type: Movie

`Top Gun` takes a look at the danger and excitement that awaits every pilot at the Navy`s prestigious fighter weapons school. Tom Cruise is superb as Maverick Mitchell, a daring young fighter who`s out to become the best. And Kelly McGillis sizzles as the civilian instructor who teaches Maverick a few things you can`t learn in a classroom.

I think this movie speaks for itself, and either you like it or you don`t. Personally I like it very much, and for me it is really a piece of nostalgia, eventhough it is pretty much a trip of the 1980`s idea of flawless (american) heroes saving the world. If you like aviation - you should not leave this movie out of your collection.

The video quality is very fine, definetely compared to the old VHS copy. The transfer is anamorfic with good resolution indeed and nice clear colours. It fully justifies the incredible aerial photografy of the movie.

The DD 5.1 sound track is clear and bassy where ever needed. It is evident, though, that it is remastered from the movie`s original Dolby Stereo sound track, which leaves no room for spilt surround effects. Furthermore, it`s pretty similar to what I remember from the VHS copy (which was good!), only with better resolution, better dynamics, and better channel seperation.

The disc is absolutely clear of extra features (not that I care much for those anyway) and the menus are static and silent, but you get pretty much what you need.
posted by aliin on 6/10/2000 15:58
7 / 10

The year 1986 had som pretty amazing movie, like Stand By Me, Aliens, Crocodile Dundee and many others like Top Gun.
I must say that i waited for this dvd release some time and I was willing to pay almost anything, well maybe not anything, but quite much.Then the moment comed, I had Top Gun Dvd on my hands and the quest for this dvd was over.It was a little disappoinment on the transfer, specially when there were no extras, not even an trailer, but it`s Paramount (luckily they have nowdays started to put som extras on their dics).The video transfer is ok, but you can see the age of the film and among with it the video can`t be so very superb.The audio was a great suprise, I didn`t remember that it would had so great sound effects and unforgetable soundtrack.I had to get this dvd also, because I`m a Tom Cruise dvd collector and also because this is a classical turboengine "American hero" movie, which I like so much.Menus are too typical, no sounds and no music or any visual moving elements, but still a good dvd.

Top Gun`s high flyin` action, touching love story, and abundance of hotties is practically blows one straight out of their seat!!! The only thing that really crashes and burns are the features- none to speak of. But that`s alright, the movie makes up for it!!! ^-^
posted by Rika Meiyano on 7/7/2001 02:56
4 / 10

This film is about action, music and photography. Forget anything else. Its is beautifully made, the soundtrack and effects play very well on DD5.1 but don`t expect anything more than a technically perfect action movie. It is as empty as a samosa.

I don`t know why most action movies insist on telling a story.

U-571, for example, would go much better without the initial "dry" scenes. They could be substituted by titles introducing us to the story.
Vertical Limit is another example of what could`ve been a very good action movie turned mediocre by a ridiculous story, poor drama and, as a consequence, bad acting.

They should follow the James Bond example and go straight for the action. Put appart those ridiculous personal dramas that bore instead of adding to the story/plot (if any).

Enemy Of The State, by both Tony Scott and Jerry Bruckheimer, has lots of action and a story that holds everything glued together. Top Gun is about action with "dramas" that bore. Use the fast forward on these.
posted by JosÃ© Azevedo on 8/7/2001 05:23
7 / 10

This film is a bit of a classic by now, so there's not much point in going into the story - if you love the film (as everyone should!) then there's no point in me going on about it!!

Video and audio are both pretty good… what is devastating is the lack of extras. I love this film, and would love to see a decent DVD release of it, with at least some special features. very disappointing!
posted by Rich Davies on 20/9/2002 08:45
8 / 10

Put your brain in neutral, sit back and enjoy the action.
Optionally, fast forward over the slushy romantic bits, and back to the action.

This has to be one of the best films around about flying fast jets.
Having said that, the competition isn`t that intense.
Ermmm, Iron Eagle 23 anyone...

The plot, such as it is, is vaguely about a pilot going through ...
oh whats the point, you`ve either seen it, or if you haven`t
The plot is not what you should watch it for. It has some nice moments, but its not really the point.
The point is the plot is a backdrop to the action.
The point is to watch fast jets being thrown around the sky.
The point is to feel the rumble from the sub-woofer, and to enjoy the action.

There are a number of memorable quotes in the film, I`m not sure all of them actually originated in the film. Over time, as I`ve learnt a lot more about military aircraft systems, prompted in no small part by this film, there are any number of technical problems with it. This is Hollywood, and they have to cater for the man in the street.

Quote:
"... with a history of high speed passes over five air control towers, and one admiral`s daughter!"

The video is ok, its sharp enough for me, and much better than the VHS I use to own.

Quote:
"It`s classified. I could tell you, but then I`d have to kill you."

The sound is the main event in this film. Certainly an excellent workout for the subwoofer. I think it could have made better use of the 5.1 back channels, but it uses them enough.

Quote:
"The defense department regrets to inform you that your sons are dead because they were stupid. "

Extras? Extras would have been nice. Any extra, come on guys, not even a trailer??
I guess we`re lucky we got chapter indexes!