Review of De-Lovely
added by
Mark Oates
Places to Buy

DVD
When The Wind Blows (UK) 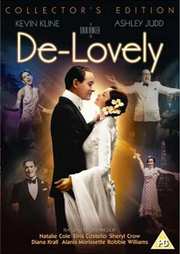 Despite his sexual preference for men, Porter found inspiration and virtually unconditional love with Linda Lee (Ashley Judd). Told in flashback as Porter is near death, the film follows the Porters` fabulous, unconventional relationship from their meeting in Paris to their subsequent moves to Venice, New York, Hollywood, and Williamstown, as well as the many stops along the way. Kline perfectly captures the Porters` zest for life and seemingly inexhaustible need for love. Classic tunes such as "Let`s Do It, Let`s Fall in Love," "Let`s Misbehave," and "Anything Goes" take on whole new meanings when considered in the context of Porter and Lee`s life together.