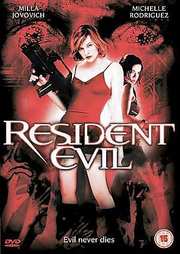 DVD
Chronicles of Riddick, The (UK)

This film has had some pretty damning reviews so far. This is an adaptation of a popular computer game series, and while I`ve heard of it I`ve never had the inclination to play it. There has also been a lot made of the director, Paul Anderson, none of it particularly good. As a keen watcher but not a massive film buff, I am pretty much ignorant during general chat about directors bar the big names. With both those facts in mind, I eventually decided to try this film out and came to it with a pretty open mind bar some reservations that lay over from reading other reviews here.

This film centres on a large secret underground research facility (the Hive) owned by a large Corporation, one of those that seems to have a hand in everything from computer technology to medical supplies. This doesn`t really stray too far away from the Hollywood idea that large corporations are bad, ignoring the fact that all the large Hollywood studios are in fact large corporations. Anyway, a saboteur/thief makes off with the top secret T-Virus while also deliberately releasing some of the virus on his way out. This leads to a massive security lock-down where all the employees that work there are locked in and killed by the Central Computer called the Red Queen. Meanwhile an elite security team has been despatched to the Hive to investigate and discover a near naked Alice (Milla Jovovich), who appears unharmed but has short-term memory loss. The extended team move into the Hive in order to shut down the Red Queen and discover what has happened.

I don`t care what anyone says about this man`s directing, but his use of visuals is impeccable. The print is pristine and is one of the most visually impressive transfers I`ve seen. The underground scenes are suitably dark and moody, but still crystal clear. Any shots that incorporate technology (hardware, doors, corridors, etc) are crisp, smooth and shiny and reminds me a little of the X-Men in the visual style used. The use of CG to show some of the shots from the perspective of the Hive computer was good and helped to keep it a little more interesting.

The soundtrack is good, scored by Marco Beltrami and shock-rocker Marilyn Manson. The overall score is suitably muted and eerie, but explodes into a heavy rock -out when anything suitably exciting is happening. It`s taken some stick on this site, but I think it`s pretty effective.

Making Of: standard fare for documentaries of this type. Some useful information on the making of the film, but of limited repeat viewing interest.

Scoring Resident Evil: 10 minute feature featuring mainly Marco Beltrami and Marilyn Manson explaining their differing approaches to scoring and how they got together. It was interesting to actually see Manson in an interview setting and explain his approach to scoring his first movie.

Costumes: docu with Richard Bridgland, production designer. Very short and of minor interest as there really is nothing of note here other than Jovovich thinking she was wearing that short red dress to make the fights look more realistic.

Set Design: pointless, just repetition from the Making Of extra

As I didn`t come to this film with high expectations, I enjoyed it for what it was. Just a well produced, good looking monster flick. From the look of the cast, it was pretty obvious that most were only there to make up the numbers, and that it was one of those films where people get bumped off one at a time. It`s just a real shame that Colin Salmon didn`t make it further than he did, although he went out in a pretty cool way and with a hint of dignity. Jovovich was a good lead, even though she didn`t really do much other than look around blankly and then spring into action and kick ass.

Rodriguez looked suitably moody, but I really wasn`t convinced by her long resistance to the T Virus prior to the sudden transformation to one of the undead. Seemed really odd and a major plot-hole, especially as the other infected member of her team changed pretty quickly with arguably lesser wounds. Still as an updated version of Aliens` Vasquez, she does a pretty good job.

Another problem for me was the appearance of the Red Queen. The idea of modelling the computer on a child was a good one but ultimately failed as asking a child to read adult lines just doesn`t work. The SFX were good, the zombies and dogs in particular impressed. I wasn`t so impressed with the `end-of-level` beast though. It just looked too CGI and just failed to convince.

Overall though, this film looks and sounds great and is a worthy bubblegum thriller. I`m hearing that Resident Evil: Apocalypse is coming up next, could be quite good…