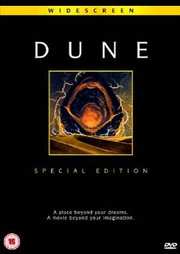 DVD
Chronicles of Riddick, The (UK)

There are more versions of Dune available on DVD right now than you can shake a stick at. Originally, the film was released through Castle Home Video and it was a rather lacklustre disc, sourced from a worn print and presented in a distinctly murky letterbox format. It was disappointing to say the least, when you consider the sheer imagination and splendour of the design and execution of David Lynch`s vision. You can still find the extended version of Dune available from Castle, but when it came to releasing a Special Edition of Dune, it was released on the Sanctuary Visual Entertainment label. The film was sourced from the best possible archive print, and was cleaned up and digitally remastered for this two-disc set. It`s fair to say that Dune looks absolutely splendid. It`s still the same film though.

I have three kinds of movie in my collection. The majority are good films, films I like for their quality and excellence. The second type is the bad film, films that are so bad that their very rankness is a virtue, think worse than Waterworld and you get the idea. Finally we have the rarest of breeds, the nice try, films that you just have to stand up and applaud for their ambition. These films attempt to scale the highest of heights and fail miserably, spectacularly and crash to earth, deafening in their failure.

Dune is one such film. The scale of the David Lynch`s vision is mind-boggling; he attempted to bring an epic novel, vast in scope and complexity to the screen. The story was condensed to two and quarter hours, bringing the epic vistas of four worlds on to the screen. Having read the book, the fact that they failed isn`t surprising; the fact that they even made the attempt is astounding. You won`t be surprised when I decline to summarise the story. Suffice it to say that this is a complex tale of politics, eugenics, and war. Two rival houses, the Harkonnens and the Atreides battle for control of the planet Arrakis, both sides manipulated by the Imperial court of Shaddam IV and the Spacing Guild. While this occurs, the Bene Gesserit sisterhood is trying to breed a messiah, the Kwizatz Haderach, by manipulating the bloodlines of both rival houses. On Arrakis, the Fremen are fighting for their freedom and await the fulfilment of prophecy, the arrival of the messiah who will lead them to victory. 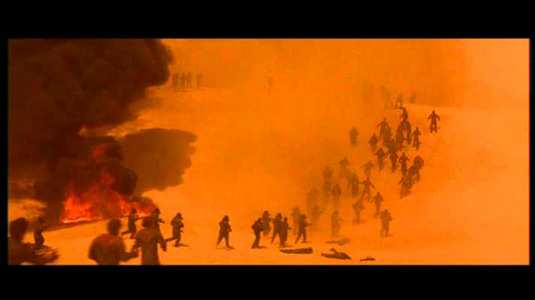 Finally, Dune gets the treatment it deserves. The 2.35:1 anamorphic transfer is astounding. The image is sharp, clear and largely unblemished. The rich design and lush colours come through with amazing vibrancy, it is a wholly transcendental experience compared to the earlier release of the film. The only flecks of dirt apparent on the film are visible when a text caption appears on screen, the rest of the film is nigh on flawless. There is just a smidgen of grain, and a couple of scenes where there is a slow pulsating change in brightness, a problem with the first release also. Other than that, the picture quality on this disc is a joy.

The film itself has been wonderfully preserved. The sets are massive and the design lush. The Atreides live in beautiful reds, gold and browns. The Harkonnen live in an industrial nightmare, all dark greys and greens. The Imperial court is strangely retro and seems like an art deco cruise liner including the costume design. The worms are impressively gargantuan and the dunes themselves expansive. The film`s scale is accordingly vast. Why be big when you can be bigger seems to have been the credo. This film is a masterpiece of design.

Incidentally, the discs are Region free, and the image is given a PAL transfer. 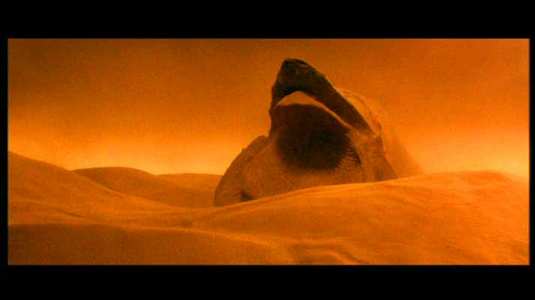 The first release had a DD 5.1 soundtrack that was hardly worth the name. The dialogue was indistinct, the music was muddy and the experience was little different from a VHS version. Not the Special Edition though, as once again the sound has been completely rejuvenated. You can watch the film with the original DD 2.0 Surround track or a remixed DD 5.1 track. While the reliance on inner monologue, to express the thoughts of the characters is still there, as the dialogue is carried firmly on the central channel, there is never any difficulty in discerning what is being said. However this release lacks subtitles for the film or the extras.

The surrounds are used energetically. Excessively so in fact, as this is one of those remixes that shunts any extraneous noise to the rear speakers just to impress you with the fact. It isn`t that much of a problem, and the original stereo track is there for purists. The music is beginning to grow on me, and I`m beginning to find that the prog rock aspect to the theme actually suits the film quite well. 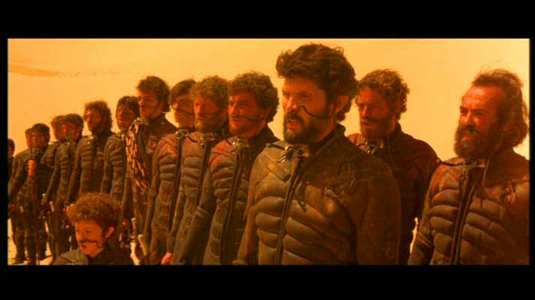 The discs come in a cardboard case, placed in opposing digipack inserts on the inside. Some rather charming animated menus present the film and the extras disc to excellent effect. While Disc 1 holds the film, Disc 2 contains the extra material on a single layer disc.

Impressions of Dune is a recently made documentary and is presented in anamorphic widescreen and with a DD 2.0 Surround track. In it members of the cast and crew are interviewed about the film, its inception and the process of making it. It`s an excellent retrospective that lasts 38 minutes. It`s also worth noting the quality of the film clips here, as in their unprocessed form, they give a good idea of how much work was done to clean up the film.

Destination Dune is a short promotional film (6 minutes) presented in 4:3 and shot while the film was being made in 1983; there is plenty of B-Roll footage and behind the scenes goodies, as well as hints to deleted scenes. There`s also a nostalgia inducing narration from voiceover man.

There is a brief interview with Frank Herbert on BBC Breakfast recorded in 1984.

The theatrical trailer is presented anamorphically, and there are cast and crew text profiles for your edification.

Inside the case, you will also find a 32-page booklet relating the film`s genesis, with a foreword from Brian Herbert and Kevin J. Anderson, authors of the Dune prequels. It`s illustrated with some production stills and design sketches.

I can`t help but be disappointed by the extras on this Special Edition. Perhaps I have been spoilt by the LOTR discs, but on a film of such a scale, of such visual scope, I was hoping for much more than barely an hour of material. David Lynch is conspicuous by his absence, although given the film`s initial reception it would be understandable why anyone would be reluctant to contribute. Indeed, of the cast only Kyle MacLachlan speaks on the documentary. This film rightly deserves an audio commentary; the sheer number of potential deleted scenes is mind-boggling, also as the lavish design and scale of the film is so beautiful, I would loved to have seen galleries of production designs, artwork and stills. This release is very much a missed opportunity. 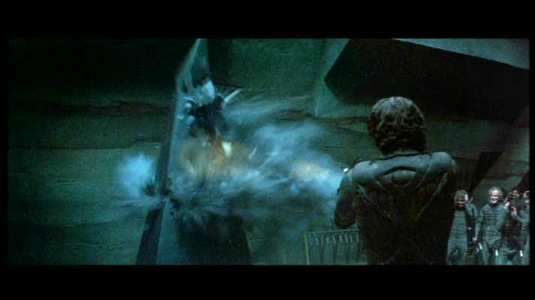 All the elements of the story combine to make for an intriguing and intertwined tale of conflicting motivations and destinies, that could barely fit into 10 hours of screen time let alone 2. The film has therefore dispensed with massive swathes of the story, trying to cut to the core of the story. However, this has gone too far, the story is disjointed and almost nonsensical. At the beginning of the film, an hour or so is spent on character development, and the pace is pedestrian, yet once attention shifts to Arrakis, the years fly by with no mention, the flow of time is haphazard. You don`t know what happens when, and the only sign of aging is the length of Gurney Halleck`s hair.

Another problem is that the story relies too much on inner monologue. The characters actually say little, but the action seems to pause, while off screen their voices supply their thoughts. This is the way that novels and other written entertainment work, but this is just meaningless for the medium of cinema. A picture is worth a thousand words; actions speak louder than words, a couple of clichés that apply here.

Aside from a couple of pieces of utter miscasting, the cast is top notch. The less said about Sting and his metal codpiece the better, it`s too easy a target. My particular problem is Jose Ferrer`s portrayal of Emperor Shaddam IV. He is far from imperial and majestic. In fact, he looks more like a put upon old man given to temper tantrums. He looks far too much like someone`s genial uncle rather than the Emperor of the known universe. Kyle MacLachlan is competent as the young Paul Atreides. A pre-Star Trek Patrick Stewart is here as Gurney Halleck though he does have a tendency to lapse into a Yorkshire accent at times. Brad Dourif has made a career of playing the strangest of characters; here he is the Mentat, Piter de Vries. Dean Stockwell is brilliant as the tragic traitor Dr Wellington Yueh, but Kenneth McMillan`s evil Baron Vladimir Harkonnen effectively steals the show. Watch the spittle fly as he bellows, pontificates, rants and rages with impunity. Again the piecemeal nature of the script means that many cast performances are reduced to cameos. Blink and you`ll miss Max von Sydow, Linda Hunt, Richard Jordan, the ever beautiful Sean Young and a young Virginia Madsen. At least Virginia Madsen has the memorable prologue. I think her sultry enunciation of "Dune" is burned into the surface of my brain.

In conclusion, this is a beautiful failure. You have to credit David Lynch and Dino de Laurentiis for making the attempt. It could never have worked but for a sci-fi fan this film is worth it just to realise what to aim for. The movie looks absolutely gorgeous on this disc, better than I have ever seen it, and it puts the original release firmly in the shade. The presentation too is also immaculate. However the extra features are certainly disappointing, and once again subtitles are absent, in many ways another missed opportunity.