Article
Troll Hunter Coming To DVD and Blu-ray on January 9th 2012 plus Chance To Win a Home Cinema! 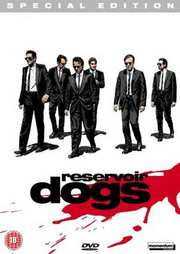 Synopsis:
They were perfect strangers, assembled to pull off the perfect crime. Then their simple robbery explodes into a bloody ambush, and the ruthless killers realise one of them is a police informer. But which one? Critically acclaimed for its raw power and breathtaking ferocity, Reservoir Dogs is a brilliant American gangster movie classic from writer-director Quentin Tarantino.

It`s bloody brilliant and you know that already.

Video- Presented in 2.35:1 anamorphic widescreen. The SE Dogs seems to be worse than the previous bare bones release. Why is the video quality so dark? the previous release was far brighter. It`s noticable in the warehouse scenes.

Sound- Sadly, no DTS here but we have the next best thing, DD 5.1. Dialogue is clear throughout however, there are a few dialogue missing from the previous release. See DVDcompare.net. This is dialogue heavy film so don`t expect any action throughout. Purist will be very angry as the original 2.0 is removed for this release.

Extras- Bits and pieces here. Disc one we have a commentary from QT and cast and crew. This is not one of those lively commentary instead it is cut and pasted from several interviews and put together as a commentary. There is very little to learn and hence very disappointing. It defeats the purpose of calling this feature a commentary.

2nd disc is bits and pieces. You get interviews with QT and cast. Very short and very little to learn.

EDIT: I`ll take back what I said about the interviews. See my review on the R1 version of Dogs.

There are 3 deleted scenes. One of them is worth looking as it gives further background to Mr.White. 2 alternate ear cutting scenes are included. They are both inferior.

More talking heads here, An Introduction to Film Noir, Class of `92: Sundance interviews, Dedications: Tarantino on his Influences and Tribute to Lawrence Tierney(Joe Cabot). They are all self-explanatory.

The most funniest feature on this DVD is Tarantino`s Sundance Institute Film-makers lab. This is basically screen tests. QT playing Mr.White is hilarious. His `treatment` of Mr.Orange is so funny.

Unfortuantly, there are some extras that didn`t make it to the R2 version. In the R1 and R4 versions, there are: DTS, critics commentary, more interviews and "Small Dogs" featurette.

There is no making of documentary on any version of the SE. There should`ve been only fewer extras but lasting at least an hour each sort of like the LOTR:EE.

There are no subtitles for the extras. Standard practice for Momentum.

The most insulting bit(IMO) is that the 2nd disc is dual-layered and the 1st disc is a single layered DVD. It could`ve been the other way round so that DTS(and max bitrate) can be put in.

Overall- If you have the bare bones release, it`s probably not worth having. If the extras were less quantity and more quality otherwise, this is one film that speaks for itself.