DVD
Age Of Innocence, The (UK) 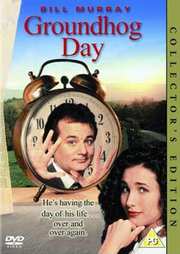 Synopsis:
Bill Murray is at his wry wisecracking best in this riotous comedy about a weatherman caught in a personal time warp on the worst day of his life! Teamed with a relentlessly cheery producer and a smart aleck cameraman, TV weatherman Phil Connors is sent to Punxsutawney, Pennsylvania to cover the annual Groundhog Day festivities. On his way out of town, Phil is caught in a giant blizzard, which he actually failed to predict, and finds himself stuck in small town hell.

Introduction
I think this is a good movie. Perhaps not a great epic of a movie, but a good one none the less.

Its the sort of movie to put on when you`ve had a hard day at the office and want to kick back and relax for an hour or two. Its probably dangerously close to being a chick-flick, except its nearly all about Bill Murrays character, so thats how us macho, vindaloo-eating, terminator lovin` guys excuses ourselves!
Its certainly no Sleepless in Seattle, but is engaging comedy with a small love interest thrown in.

The Plot
Its a nice idea for a plot. A grumpy, cynical TV presenter goes to cover a groundhog day ceremony (eponimously) that happens every 2nd Feb in the U.S. Believe it or not, it really does happen every year too (www.groundhog.org/). Those crazy yanks! You wouldn`t catch us doing something this corny in the UK surely (obviously we`ll leave out references to morris dancing, guy fawkes and so on!).

He`s done it before, hes got to do it again, yadda yadda yadda. A few cliche`d comments, a quick bit of film, and he`s all done. Then he gets snowed in, has to spend the night in this small town, and wakes up to the same day, 2nd Feb. Every following day is the same, all 2nd Feb.
He is doomed to relive this day over and over.

At first, he can`t believe it, then he decides to exploit it, as no matter what he does he`s back where he started the next day. He goes through various phases then, as the realisation sinks in. What would you do it nothing you did today mattered tomorrow...??

Eventually, and the commentary suggest about 10 years of living the same day over, he finds an escape.

The Visuals/Audio
The video and sound come out pretty well, but its a dialog based film, so there its a great workout for the sound.

The Extras
There is a commentary which is pretty interesting in parts. Some of the background comes out here, and discussion on how the effects (same things happening in the background, but Bill Murray doing something different in the foreground).

The weight of time documentary covers some of the behind the scenes stuff and insights into making it. Its a good backdrop to the film for those that want to know more.

Also some trailers and previews. Nothing too exciting there though.

As a collectors edition, it isn`t as heavy a hitter as some of the multi-disk editions that are around, but it comes out ok I think.

Summary
The film is certainly worth watching, especially if you haven`t seen it. Plan it for after your next hard-days slog.
posted by Julian Onions on 27/1/2004 13:02