DVD
Day of the Dead (UK) 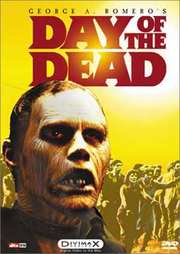 Synopsis:
The concluding part of George A. Romero`s cult horror trilogy opens with the undead roaming the planet freely. The living have been forced underground, where they make their base in a hidden missile depot, helping with the experiments of scientist Doctor Logan (Richard Liberty), who hopes to domesticate the zombies. However, the military faction of the human survivors favour a more direct approach, and with food stocks becoming ever more depleted, they decide to take action. What folllows is the final showdown between the forces of the living and the armies of the dead. Also available as part of a double bill with the first part of the trilogy, `Night of the Living Dead`.

Directed By:
George A. Romero

Written By:
George A. Romero

Intro- Day of the Dead is George A. Romero`s final trilogy of the dead series and arguably his worst. The plot is simple: The zombies have taken over the world! A group of civilians decide to take refuge in a hidden missle depot under the strict reigeme of Captain Rhodes. Romero`s trademarks are carried on to this film, strong female and black characters.

Personally, I think it`s not too bad and is better than other movies such as Hannibal. The fault in Day of the Dead is the tedious dialogue which bores a lot of the audience. In additon to that, the heavy dialogue doesn`t suit most horror genres but fits another genre like crime such as Pulp Fiction, Fargo or The Godfather. I would give Day of the Dead 7/10.

Video- Anchor Bay is generous enough to put Day of the Dead in the DivimaX series ie. digitally remastered the film using the original negatives. The film is presented in 1.85:1 anamorphic widescreen. The film has never been better before; the colours now look more natural and well defined unlike the UK release which looks all washed out(and in letterbox format). The print looks fairly clean, free of artifacts and grains. However, there are a few instances of flecks but nothing to distracting. A terrific job from Anchor Bay.

Sound- Again, Anchor Bay has done a great job with the sound. You have a choice of DD 5.1 EX or DTS 6.1 ES. Both do a terrific job but the DTS(as always) gives more emphasis in the sound. Dialogue is relatively clear, although it`s a bit low at times. MINOR SPOILER The action really kicks in at the second half of the film.

There is an option to listen to the entire film in DD 2.0 if you don`t happen to have 5.1 speakers. Unfortuantly, purists will be very angry because there is no original mono sound. A pity since I want to compare the remix and the original mix. Note that some of the lines are re-dubbed don`t sound the same as the original actors.

Extras- The film alone has been given a special treatment, it seems that Anchor Bay has gone the extra mile by including two discs loaded with features.

The 1st disc boasts not only 1 but 2 commentaries. The 1st is from George A. Romero, Tom Savini, Cletus Anderson and Lori Cardille. A lively commentary. Worth listening to and all give very interesting facts such as the beginning scene and the production as a whole. I`m not going to spoil anymore.

The 2nd commentary is from Roger Avary, Quentin Tarantino`s co-writer of Pulp Fiction.(in a way, this is related to Pulp Fiction;)). It`s no Bey Logan commentary but it`s worth listening to. Avary never stops talking in this track!

Moving on to disc 2 is a documentary called "The Many Days of Day of the Dead" which features interviews with George A. Romero, David Ball, Tom Savini, Greg Nicotero, Cletus Anderson, Chris Romero, Lori Cardille, Joe Pilato and Howard Sherman aka Bub. This 40 min documentary covers many aspects of the film and is worth looking at. It appears that Romero wanted Day of the Dead to be bigger in terms of locations but due to the budget, he couldn`t achieve this. Even worse, he was only given $7,000,000 if he gets the film to be an R-rated feature otherwise, it`s $3,500,000 for no restrictions in violence. Overall, it`s worth watching although a bit short.

Next, there is Day of the Dead: Behind the Scenes is 31 mins of production footage from Special |Make-up Effects Artist Tom Savini. Basically, this shows footages of various extras getting their zombie make up put onto them and how a certain prop works including zombies getting shot.

SPOILER:
The behind-the-scenes footage also includes Rickles death and the infamous Rhode`s death involving a horde of zombies ripping him in 2, a reference used later in Shaun of the Dead.

There is a 15 min audio interview with Richard Liberty(the mad professor in Day of the Dead). This is recorded in March 2000.

The fillers begin here. Wampum Mine promotional video is self explanatory and lasts for 8 mins. There is an extensive gallery from production stills to continuity stills galleries and several trailers and tv spots. Fillers end here.

Finally, if you have a computer, a DVD-ROM feature is on the 2nd disc with the original screenplay(what Romero originally intended Day of the Dead to be) and Production memos. The gives interesting notes such as what will happen to that particular zombie and how the special effects are achieved.

Overall, not a bad package as I`ve seen worse. The discs are put into a digipack(a keep case would be preferable) and is supplied with what looks like a note book containing an essay and chapter selections. It`s a pity that the digipack doesn`t have a pocket that holds the booklet. When you first open the package, the booklet may fall off!


Overall- Day of the Dead is not as "Jaw Dropping" as The Village Voice says. Although it`s the weakest of the trilogy due to the heavy dialogue, the extras make up for the overall experience.
posted by alias-rf2 on 8/8/2004 20:32