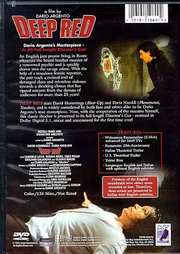 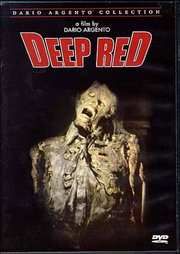 Synopsis:
An English jazz pianist living in Rome witnesses the brutal hatchet murder of a renowned psychic and is quickly drawn into the savage crime. With the help of a tenacious female reporter, the pair track a twisted trail of deranged clues and relentless violence towards a shocking climax that has ripped screams from the throats of audiences for more than 25 years!

Deep Red stars David Hemmings (Blow-Up) and Daria Nicoldi (Phenomena, Tenebre), and is widely considered by both fans and critics alike to be Dario Argento`s true masterpiece. Now, with the cooperation of the maestro himself, this classic shocker is presented in its full-length Director`s Cut - remixed in Dolby Digital 5.1, uncut and uncensored for the first time ever!

Regarded by many as Dario Argento`s masterpiece this cemented his reputation as the "Italian Hitchcock" and displayed a cocky assurance in handling tricky camerawork and pacing.

First note that this isn`t your standard slasher movie, neither is it your typical italian rip off gore movie. In fact there`s almost an hour passes between the first murder and the second as the narrative and character development come to the foreground more than you`d expect. Also note that casting David Hemmings in the lead drew comparisons with the movie "Blow Up", also starring Hemmings, due to a central theme of the lead character being bugged by something he thinks he saw that`s vital to the plot, but isn`t sure what it is.

Stylistically, this is very assured film-making with flowing cameras and symbollic shots that could be the killer preparing for his next murder, or could be an insight into the murderers mind. The film`s also wrapped up in a flashback involving a child, a murder in silhouette, a knife and a childrens nursery rhyme, the significance of which becomes all too obvious as the movie progresses.

Anchor Bay have given the film a fine transfer with minimal grain considering the age and the fact that close to half an hour has been restored. The colours are well defined with striking reds and blues and perfect black that at times hides the killer, and at others reveals. Presented in 2.35:1 widescreen and enhanced for 16x9 TV`s the format perfectly shows off Argento`s framing of key scenes. A three minute conversation between Hemmings` character and another about the first murder shows them at the very edges of the TV, dwarfed by the gigantic statues of Milan - impossible to view pan and scan.

The sound also is great, with both the Italian and English soundtracks presented in 2.0 surround or 5.1 Dolby Digital, highlighting both aspects of Goblin`s score. Pounding electric rock over moments of action reveal a strong bass sound and the lighter, more haunting moments, including the nursery rhyme, are equally well mixed. The only gripe here would be with the subtitling. The restored footage was never recorded with an English soundtrack, hence if watching in English these scenes, sometimes seconds in length, are in Italian. There`s no option to have subtitling in just the Italian scenes, meaning you need the subtitles on all the time to avoid missing dialogue. The best way of watching the film, therefore is in Italian language with English subtitles, one for the purists.

Extras-wise you get two very different trailers, one American and one Italian. The American plays on the film`s shock value, a little misleading as it`s not an exploitation movie (although it was re-titled "The Hatchet Murders" for the US market), whilst the Italian trailer is made up of stills and slow camerawork from the film along with Goblin`s haunting score and piano led nursery rhyme.

Also included is a decent 25th anniversary documentary, although this is something of a missed opportunity. Considering they got Argento, co-writer the late Bernardino Zapponi and composers Goblin it`s a shame they could only muster a 14 minute featurette. Good though it is, featuring anecdotes and an insight into the film-making process, you can`t help but feel slightly short changed, as though you should have been given more. It`s also interesting to note that Argento contributed a commentary to Phenomena, known to be his favourite work, and for Tenebrae, his most personal work, suggesting Deep Red isn`t amoungst his favourite films. This aside there are fairly brief talent bios and liner notes.

In all this is a decent package with the quality of the film, transfer and sound more than making up for any shortcomings the extras may have. Just one final point, when the killer`s revealed take a look back at the beginning of the movie...you`ll know the scene in question. It doesn`t cheat...
posted by Simon Towers on 8/6/2003 18:08