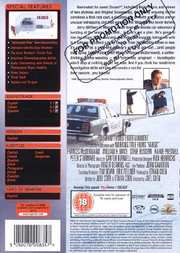 DVD
Big Lebowski, The (US) 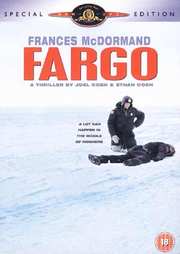 Synopsis:
William H. Macy plays Jerry Lundegaard, a Minneapolis car salesman who is, by all accounts, a loser. He is desperately in debt, so decides to hires two thugs (who are as bigger losers as he is) to kidnap his wife in the hope that his wealthy father-in-law (who bullies him regularly) will pay the ransom. When one of the kidnappers goes of the rails and events career out of control, it falls to Marge Gunderson, Chief of the Brainerd Police Department, to set things right.

Arguably the best of the Coen brothers films (they won and Oscar for the script), featuring two of their best usual suspects, Steve Buscemi (Barton Fink, The Big Lebowski) and Frances McDormand (Blood Simple, Crimewave, Raising Arizona) -who won the Best Actress Oscar for her performance in this role.

The film raked in a range of other prestigious and International Awards, 36 in total - including best direction at Cannes and David Lean Award for Direction at the 1997 BAFTA awards.

Movie- The plot is straightfoward. Jerry Lundegaard, an average car salesman who is in debt and hires two (inept) thugs non-stop blathering Carl Showalter and taciturn Gaear Grimsrud to kidnap his wife, Jean and hope that his father-in-law will pay the ransom. Intially, the kidnapping goes to plan but there`s always outside intervention which stops the troublesome two-some from achieving the objectives smoothly. Just as they drive back to their hideout, the pair are stopped by a cop. It`s no long when Gaear decided to blast the cop in the head after he is too curious as he pries his nose at the back of the car only to find the lady gagged up and tied. Now with a dead cop in their hands (literally), Carl has to drag the corpse out of sight. To make things worse, a couple witnesses the horrific act and drives off quickly. Gaear takes the wheel to try and persue the escaping car only to be out of sight. Worried at first but finds a flipped car, Gaear gets out the "loaned" car (Jerry provided the car for them) and kills the escaping man (jokingly credited as Prince) and his wife still trapped inside the car. Enter pregnant policewoman Marger Gunderson who investigates the triple homicide and hunts down the 2 thugs and their boss. Fargo is one miracle of a movie. Fargo is an odd mixture of other genres, the black humour is clashed together (nicely) with the visceral and brutal violence. You can`t get a more original, surreal and down right darkly funny crime thriller better than this (as of now). The film is full of very weird characters mostly because of the accents such as the characters saying "yah" constantly but I can see the Coen brothers have been doing their homework. For a 95 min film, it`s very slow paced. The violence is genuinely shocking when it comes. One second, guy gets shot, next second, guy is covered with lots of blood. It will stick into your mind for quiet a while but it`s the plot and characters you will remember the movie for rather than the graphic violence.

Pictue- The picture is good enough for me. Present in 1.85:1 anamorphic widescreen, the colours are vibrant and well defined and the colour palettes has changed from the previous dvd release. Just a few bits of flecks here and then but you have to focus on the picture and not the movie itself. There is little if not, no edge enhancement unlike the previous DVD release which is ridden full of edge enhancement. A relatively faultless transfer.

Sound- Presented in DD 5.1. There isn`t much use of the rear speakers except the musical score but it`s very subtle. This is a dialogue heavy film much like Pulp Fiction and you get a few occurences of gun shots. There`s also an option to listen to the entire film in French or Spanish just to hear the characters say "oui" or "si". Personally, I think the subtitles would be better than dubs since they take away the entire context of the film and the humour is lost in translation. DTS would be better to give more impact. Like with many heavy dialogue films, DD 5.1 mixes are subtle and bring the oommph in your home theatre kit.

Extras- The extras are acceptable but I expected better. In terms of extras, there are no new contributions from the Coen brothers. There is an audio commentary from the Director of Photography. He mainly talks about the technical issues of the films. The commentary is slightly annoying and dry as he tries to remember certain scenes like "Oh yeah, I filmed that here" etc. I want a contribution from the Coen brothers themselves even if it means by getting them of the sofa; literally.

Alternatively, there is a trivia track if you don`t want to hear Deakin`s commentary. It is slightly better and gives interesting facts about the film particulary about Pancake house famously said by Peter Stormare and the definiton of truth taken from the words at the beginning "This is based on a true story".

There is another archive interview (around 1995) with the Coen brothers and McDormand from the Charlie Rose Show which lasts 20 mins. This is getting slightly repetitive and nothing new is being added.

There`s an article of 40 pages. This article is self explanatory. The rest is basic ingredients(including the obligatory and inevitable trailers) which many of you don`t consider to be special features. The extras are better than having a bare bones release like the previous MGM release of Fargo but pale in comparison to the other releases.

MGM provides a small 4 page booklet about the film and on the back, there are chapter selections.


Overall- You can forget the 2 recent Coen brother films Intolerable Cruelty and The Ladykillers because Fargo is the Coens at their best at film making. Fargo is dark, tragic and funny(with weird accents). Fantastic performances from everyone. If you like black crime comedies like Pulp Fiction, you`ll like this although far more darker than QT`s masterpiece. You betcha, yah. :)

Fargo is both a very funny and a very tragic movie, extremely well portrayed by all the actors and the superb cinematography, earning the movie nearly uncountable award nominations and an Academy Award. Frances McDormand stands out as the very pregnant and smart police chief Marge, playing the role in an absolutely convincing natural, down-to-earth manner, adding highly to the movie's authenticity. As a matter of fact, it is scary how easily things get out of control in Fargo and watching it happen makes you feel like you were actually watching real life instead of a movie. Fargo is an exceptional murder mystery movie. Exceptional in many ways.

Part of the Coen brothers` bizarre sense of humor was to make a film noir almost entirely in white. What`s the French term for "light film"? "Fargo" is a comedy thriller set in and around Fargo, North Dakota, in the dead of winter. Everywhere you look, it`s snow. Miles and miles of white. The film opens in white snow, closes in white snow, and in between locates each of its murders in white snow. Like the color itself, it`s the most unpretentious, unexpected, low-key, and hilariously twisted murder mystery to come along since, well, since never.
posted by Aslan on 9/6/2004 20:00