Review of Mr Deeds
added by
RWB
Places to Buy

DVD
Master of Disguise, The (UK)

Blu-ray
You Don't Mess With The Zohan 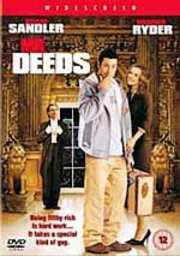 Small town guy Longfellow Deeds (Sandler) goes to the big city to collect a $40 billion inheritance from a long lost uncle. Living in a palatial mansion with the services of an unusual personal butler (John Turturro) isn`t too bad. Things get even better when he meets a beautiful school nurse (Winona Ryder). But money changes everything, and things aren`t what they seem- his sweetie is actually a journalist feeding reports of his outrageous behavior to the press! Now, it`s up to Deeds to straighten everyone out - with a few right hooks and lots of common sense.

This is another solid effort from Adam Sandler & company. It's oh so much better than the Sandler's last effort "Little Nicky", and not quite up to the "Happy Gilmore" level. Still, this can be enjoyed by fans, as well as those unaware of Sandler's previously films.

The film itself has a terrific cast including Winona Ryder, John Turturro, Peter Gallagher and Allen Covert. Steve Buscemi, John McEnroe and Rob Schneider also pop up at various points in the movie. John Turturro steals every scene he is in as Deed's butler.

The disc itself is a good effort, it's just a shame that earlier Adam Sandler discs such as "The Wedding Planner" and "Happy Gilmore" haven't been given similar treatment. Anyway, as you would expect from such a recent film, picture and audio are both good. The picture is crisp and clear and the audio (mostly dialogue driven) is fine.

We do get a nice extras package as well. The audio commentary from director and writer is interesting and entertaining throughout. While it is nice to see that the two of them are obviously friends, they are constantly interrupting and talking over each other, which sometimes results in little information actually being relayed. The also get 3 featurettes. The first, "From Mandrake Falls to Manhattan", lasts 15 minutes and deals with each of the main actors and their characters, as well as some other 'making of' information. It's interesting, but could have been a little longer. The other 2 featurettes are around 5 minutes each - "Clothes Make The Man" deals with the clothes of the main characters (no surprise there!) and "Spare No Expense" looks at the production design.

Overall, a decent effort, on a good disc. Well worth a rent for fans of the genre and worth buying for Sandler fans.
posted by Rich Davies on 27/6/2003 06:08