Review of Windtalkers
added by
RWB
Places to Buy 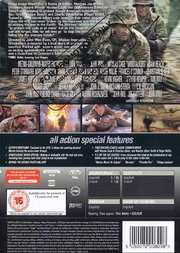 Back Cover of Windtalkers

DVD
Lord Of The Flies (UK) 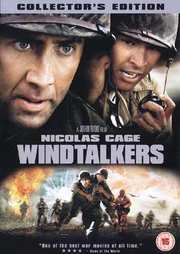 Synopsis:
In 1942, several hundred Navajo Americans were recruited as Marines and trained to use their language as code. Marine Joe Enders (Nicolas Cage) is assigned to protect Ben Yahzee (Adam Beach) - a Navajo code talker, the Marines` new secret weapon. Enders` orders are to protect his code talker, but if Yahzee should fall into enemy hands, he`s to "protect the code at all costs." Against the backdrop of the horrific Battle of Saipan, when capture is imminent, Enders is forced to make a decision: if he can`t protect his fellow Marine, can he bring himself to kill him to protect the code?

Special Features:
Actors` Boot Camp - shows the gruelling physical Marine training the actors went through
Bravo Special - Making of featurette
Audio commentary with Nicolas Cage and Christian Slater
Audio commentary with Navajos Albert Smith and Roger Willie
Fly on the set Diaries - 4 raw set pieces that observe the contruction of each scene and viewers can jump to that scene in the film
Behind the scenes photo galleries
Interactive menu
Scene access

A grossly underrated John Woo action war movie. "Windtalkers" tells the story of the contribution of the Navajo in the taking of Saipan during World War II, while dealing with Woo's trademark themes of honour, friendship and opposites. Woo' flair for action is intact, though there is no two-gun slow motion shootouts here. There are six battles, though and include many weapons including a samurai sword! Nicolas Cage, while good, is upstaged by both Adam Beach (the best performer in the film) and Christian Slater, who are both on fine form. Why did "Windtalkers" fail both critically and commercially? Perhaps it's because the film has no new message. War is hell and insane, yes, just like it's been portrayed in nearly every single war film to date. But "Windtalkers" tells a story that few people know and about and that makes it needed to be told.

Video: Fabulous, a near flawless 2.40:1 transfer. Colours are wonderful with greens leaping off the screen. Unlike most post-Ryan war films, "Windtalkers" seems to be filmed and coloured normally. Sharpness is excellent and I couldn't find an intrusive defect or compression sign. There seem to be some pixalisation during scene dissolves, but unless you really look for it you won't notice it.

Woo is a man who does it real. All the explosions and gunshots in this film are real. Although those planes look like CGI and the battleships look like archive footage! There is some really spectacular action in this film and won't disappoint Woo fans, double handguns or not. If I have one complaint is that the American and Japanese uniforms are nearly the same colour and it is at times hard to distinguish who got killed.

Audio: A strong and immersive soundtrack, though not as good at the best of the genre (Saving Private Ryan, Black Hawk Down, We Were Soldiers, The Thin Red Line). Front stage and surrounds are used equally immersing you into the battlefield and bass is strong. However, the track simply doesn't have the "Oh, crap. I'm there!" feel of there aforementioned titles. James Horner's soundtrack, like most of his work suits the film but isn't memorable.

Extras: Hooray! A Region 2 that out-strips the Region 1. Whereas the R1 had only a trailer, we get a full-blown Collector's Edition. Up first is the superb Audio Commentary by Christian Slater and Nicolas Cage. This is more a conversation than a film analysis, as they compare the film to others and share on set experiences. They also go into their characterisations. At the start Cage declares his dislike of giving away cinematic secrets so there are very few technical information on this track. That doesn't really matter; it's informative and frequently funny. The second commentary by Roger Willie and real-life Navajo is sadly, not my cup of tea. It's like listening to a documentary narration, verrry slowly and in part Navajo. People who want the innards of the plot will find what they want here.

Up next are the four "Fly On Set Diaries" with include "Marine March On Saipan", "Bazooka", "Friendly Fire" and "Village Ambush". These are on the set featurettes on the filming of the major battle scenes in the film. They are very comprehensive and show the large scope of pyrotechnics, choreography and stunts involved. Cast and crew talk over some of them and they add up to about 20 minutes in total.

"A Windtalkers Bravo Special" is your usual PR stuff. A moving photo gallery, which lasts 2 minutes rounds of the disc. Strangely, there are no trailers.

Overall: If you are a John Woo fan, like I am, you SHOULD enjoy this film. It's the Woo and he's doing large battle scenes. For the uninitiated I can't tell if you'll enjoy this. You really should know the Woo staples before seeing it. Disc wise, it has a strong presentation and good extras. I hear a 3-Disc Director's Cut is being released in America. This is probably the only time I'll say this, but you're better off with less. "Windtalkers" is long enough without another 30 minutes added on to it. The added extras on that disc include a Woo commentary (check my M:I-2 review) and history documentaries. Make your choice. This version is definitely worth a rent.
posted by directorscutIMDb on 17/3/2003 22:25