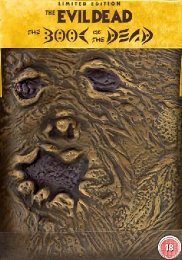 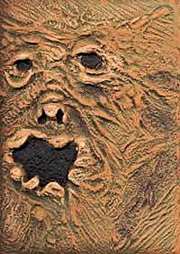 Front Cover of Evil Dead, The (aka Book Of The Dead Limited Edition)

The Evil Dead The Book Of The Dead 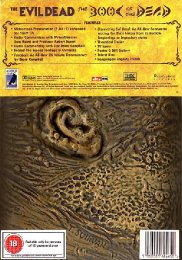 The Evil Dead The Book Of The Dead

I don't think it was until George A. Romero's Night of the Living Dead achieved massive success that filmmakers considered taking their cameras and going out and shooting their own film using their own script and relying on friends and family.  Following in Romero's footsteps was young aspiring filmmaker Sam Raimi who, with Rob Tapert, managed to get enough money to finance a short shoot in the Tennessee hills and some post production work.  With some friends, they relocated and made a film that is now recognised as a genre classic and spawned two sequels.

The Evil Dead begins when five friends from Michigan University go to a cabin in the woods for a break.  Ash and his girlfriend Linda, Scott and his girlfriend Shelly and Ash's sister Cheryl are all slightly creeped out by the place but begin to settle in with Ash hoping for a romantic weekend with Linda.  Scott and Ash check out the cellar and find a strange leather-bound book and a tape recorder.  By playing the tape they learn that the book is the Morturom Demonto, The Book of the Dead, and the cabin was used by an academic researching Sumerian demons. 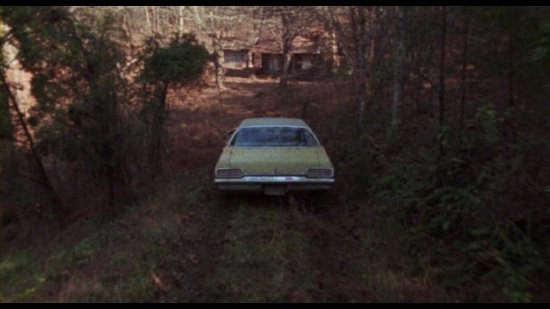 It's not long before things go very badly wrong - a voice from the woods keeps saying "Join us", the clock on the wall mysteriously stops and Cheryl appears to be possessed.  Thinking she hears someone outside, Cheryl goes to investigate only to find that the trees are alive and have malevolent intent, grabbing her wrists and ankles and raping her!

From here things get even worse with other members of the group becoming inhabited by the evil forces they have accidentally awoken and it's soon up to Ash to put his feelings aside and follow the professor's advice: the only way to 'cure' someone from possession is to dismember them!

There is nothing particularly deep about The Evil Dead, no social commentary or philosophical underpinning - it's a film of its time where young people go to an isolated building and are attacked, being picked off one by one.  Unlike something like Friday the 13th however, this isn't a slasher movie but something inspired as much by The Three Stooges as any horror film.  There's a great deal of slapstick violence, with Ash being trapped under lightweight bookcases or shelving units twice and now extremely unrealistic effects - if something looks like a rubber glove stuffed with fake blood, that's because it is! 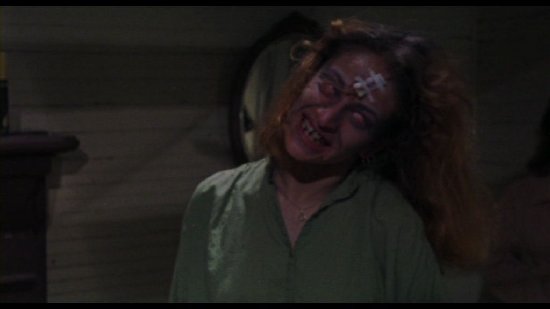 However, the film is an absolute riot and marked Raimi out as a talent in the genre because of his intelligent writing and skilled use of camera angles and editing. The film earned praise from Stephen King, a man who knows a thing or two about horror, describing it as "the most ferociously original horror movie of the year ". The Director of Public Prosecutions famously though otherwise and banned it in the 'video nasties' campaign along with other genre greats like The Beyond, Inferno and Tenebrae. Thankfully common sense has prevailed and many of the casualties of the 1984 Video Recordings Act are now available and The Evil Dead has been released many times at the cinema and on VHS and DVD.

Though it is really silly, it is undisputedly innovative and exciting and many of the themes and lines, both in this and the sequels have become iconic (Groovy!, Come get some!), making Bruce Campbell a cult star and Ash a great cult character.  It is not an accomplished classic like studio films such as The Exorcist or Rosemary's Baby but is a firm fan favourite and those who like it tend to love it.

Extra Features
The most notable aspect of this release is the packaging as the DVD comes in a foam rubber 'Book of the Dead' with pages replicating those seen in the film plus an introduction and a cast and crew list.  There is also a well written booklet about the history and cult status of the film by Michael Felsher which is a fun and informative read. This is a great way to house the DVD and perfect for collectors and fans alike. 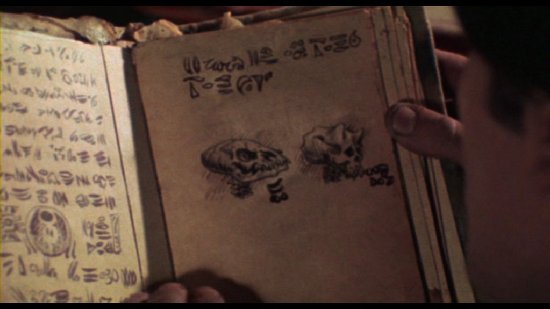 The disc has two commentaries, the first by Sam Raimi and Robert Tapert and the second a solo effort by Bruce Campbell.  Whilst it would have been good to have all three together, they provide commentaries that are complementary and don't duplicate information.  Raimi and Tapert discuss the logistics of shooting, giving some tricks of the trade whilst Campbell waxes lyrical about the perils of being an actor and laughing at his own acting and wardrobe.  There is useful information, such when you learn the cabin and cellar are in different places and the significance of the poster of The Hills Have Eyes.

The behind the scenes footage and outtakes comprises extra footage from on the set with cut takes and plenty of b-roll footage.  There are two new featurettes, Fanalysis which is Bruce Campbell's documentary about fans and the different levels of fandom.  It includes plenty of footage from conventions and interviews with fans, including a woman wearing a armoured leather outfit, carrying a sword and chakram who has legally changed her name to Xena Warrior Princess!  I've never been to a convention and some of the footage, with people milling around dressed like Star Wars and Star Trek characters looks a little scary.  The Discovering Evil Dead featurette focuses on the Palace Video label which screened and released The Evil Dead and was subject to the video nasties witchhunt.  The piece traces the path of the film in the UK and its battles with the censors.

Rounding off the set are a selection of TV spots, the theatrical trailer, a gallery and cast and crew biographies.

There are two Easter eggs that are barely hidden in the extras menus; one shows a minute of SFX test footage and the other shows a 7 minute panel discussion that took place after a screening in 2001.

As an added bonus this comes with the Josh Becker film Running Time starring Bruce Campbell which is a 'real time' heist movie.  Becker was a Fake Shemp in Evil Dead II and Army of Darkness and this is a interesting concept that is pretty well executed using the style of filming that Hitchcock employed in Rope, another 'real time' thriller.  It has Dolby Digital 5.1 and 2.0 Stereo plus a DTS 5.1 track and a well delivered and informative commentary by Becker and Campbell. 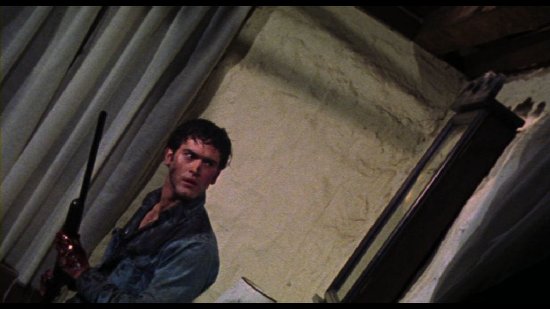 The Picture
The Evil Dead will never have a stunning picture as it was shot on 16mm film and the light levels aren't always great.  Some of the blacks are a little grey leading to slightly poor definition in the darker scenes but the colours are good, editing and camerawork innovative and the mood shifts from dark and scary to barmy.

As I said before, the effects are a little ropey and unconvincing but this is all part of the films charm and some of it was done out of necessity as the actors had finished so 'Fake Shemps' were used as stand-ins.

The only downside -- and it is a fairly big downside -- is that the film is presented in the wrong aspect ratio. It was shot on 16mm which translates as a full frame 1.33:1 ratio but this is a cropped picture, with the top and bottom of each frame having been cut off with the result that you lose the tops of some people's heads and the framing generally looks wrong. Why it wasn't in 1.33:1 or at the least, like the trilogy, with full frame and widescreen as the options I have no idea.

The Sound
The THX mastered soundtrack is impressive with clear dialogue and good sound effects in the woods and more violent scenes in the cabin. The sound design is extremely impressive and really adds to both the horror and comedy aspects.  In addition to the original mono track are several other audio options including DTS ES, all of which have their merits but the original mono is probably my favourite as it just feels right. 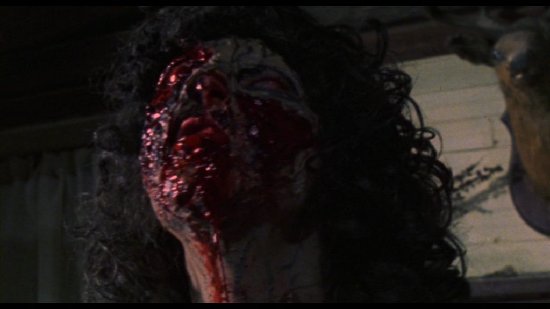 Final Thoughts
Looking back now it's hard to see why there was so much fuss over the violence in The Evil Dead, especially considering how far gore elements have progressed, not only in the horror genre, but in war films and dramas.  The film is an incredibly accomplished work by a first time director with a predominately novice cast, working for the love of film and friendship.  The violence is extreme to begin with but becomes amusing because of the sheer level of it - it's not enough to hit someone five times with a lump of wood, you have to continue bludgeoning them until you're tired and there's very little of them left!

The Evil Dead is one of the most important films of the 1980s and a great independent horror film that deserves all the praise that goes its way.  This is a top release that is better than the normal Anchor Bay release because of the packaging, booklet and bonus film.  Aside from that the discs are identical with an excellent selection of bonus material to back up a top film.