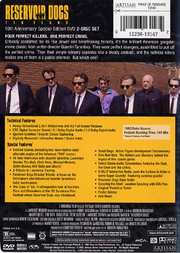 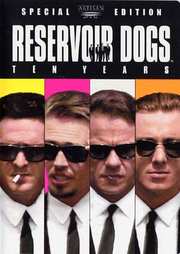 Set mainly in a warehouse in the aftermath of a bungled robbery the story gradually unfolds to introduce the colour-coded gangsters and the planning of the crime step by step, through Tarantino`s trademark flashbacks. Four have survived after a police ambush - betrayed. What went wrong and who is the betrayer?

Brilliantly scripted and complemented by the 70`s retro soundtrack, the scenes are stylish and violent yet intelligent and full of dark humour. With stunning performances by Harvey Keitel, Tim Roth, Steve Buscemi and Michael Madsen, `Reservoir Dogs` is a tense and exciting examination of male ego on a collision course that results in an unforgettable climax.

Ignore the reviewer black_chuck, he(or she) is obviously a troll(bad spelling is an obvious sign of a troll). Anyways, Reservoir Dogs is an excellent debut by Tarantino who went on to direct Pulp Fiction, Jackie Brown and recently Kill Bill. Dogs feature spot-on dialogue, stunning performances from the cast and boasting one of the coolest soundtracks ever. Reservoir Dogs only recieved $3 million in the box office, but it soared on video and puts todays Hollywood "Blockbuster" crap to shame("Fast and the Furious", "Gigli" and "S.W.A.T" to name a few).

This SE DVD celebrates the 10th anniversary of Dogs. I have the standard version not the 5 different slip case versions. I was disappointed with the UK SE version of Dogs. Will this R1 version be any better?

Video- In the OAR, 2.35:1 anamorphic widescreen. Colours are fairly sharp and well defined although they can be slightly dark or soft in some scenes. There`s been a controversy in the re-mastering since many reviewers say blacks are slightly grey however but IMO, that won`t detract too much. However, purists will hate the transfer and stick with their non-anamorphic version which the blacks are black. Apart from that, it`s a fairly good transfer. There is also a fullscreen version the 2nd disc if you don`t happen to possess a widescreen tv but it ruins QT`s epic vision.

Sound- You have 3 choices of sound, DTS, DD 5.1 or DD 2.0. All are good mixes but the DTS edges slightly. From "Little Green bag" to "Stuck in the middle of you" booms. This is a dialogue heavy film but you do get a few scenes of action and gun shots. Lots of memorable quotes from "Are you gonna bark all day little doggie or are you gonna bite?" to "Why am I Mr.Pink?`

P.S. The talk of Tarantino is probably the coolest movie quotes ever!


Extras- The extras are spread across 2 discs in an amaray case with a chapter insert. The first disc contains a commentary track, 3 deleted scenes, 2 alternate takes and interviews. The commentary is not the "everyone is in the same room" kind or more precisely a true audio commentary, instead what Artisan did is compile the commentary from several interviews ie cut and paste for example, when Monte Hellman talks, you can tell his interview is done in an office or when QT talks you can hear cars passing by. The commentary is not screen specific so not one person is viewing the movie as they speak.

Next up, there are 3 deleted scenes, all presented in 1.85:1 anamorphic and in DD 2.0. They offer some more character development. One of my fav scenes is the deleted scene which offer more background to Mr. White. They are all very grainy but acceptable. I can see why they are cut out from the final film as they slow down the pace of the film.

There are 2 alternate takes which shows two different versions of the infamous ear cutting scene. Both are inferior as the ear is obviously fake. One shows a behind view of Marvin Nash getting his ear cut off and the 2nd is an extreme close-up.

Next, you get several interviews from Chris Penn, Kirk Baltz, Michael Madsen, Lawrence Bender, Tim Roth and Quentin Tarantino. All the participants talk about the production of the film. The interviews clock in at 55 minutes and are very interesting.

Moving on to disc 2, there are Film Noir Files with contributions from Mike Hodges, Robert Polito, John Boorman, Donald Westlake and Stephen Frears, all talking about the history of Film Noir from the 50's(Reservoir Dogs has a lot of references to Film Noirs). This clocks in at about 19 minutes.

Class of '92 talks about story of the alumni(or whatever you call it) from 1992's Sundance film festival. With interviews from Alex Rockwell, Chris Munch, Kate Shae, Tom Kalin and Quentin Tarantino all talk about the movies they had in competition at Sundance. This clocks in at 29 minutes.

Following that is Sundance Institute Filmmaker's Lab. This is basically screen tests which have different people playing different roles. QT`s role as Mr.White is...priceless. His treatment towards Mr.Orange contrasts to what Harvey Keitel treats Tim Roth, as a very nasty guy instead of the compassionate Mr. White in the final film.

Next, there are 50 minutes of Tributes and Dedications. The featurettes consists of Lawrence Tierney, Eddie Bunker, Monte Hellman, Jack Hill, Pam Grier and Roger Corman. They are all self-explanatory.

The R1(and R4) has exclusive features not included in the UK version. This version has 3 critics commentary, each lasting around 10-20 mins. They are all worth listening to although some-what short.

Small Dogs featurette is a 6 min featurette which shows a guy preparing a doll figure version of the ear cutting scene. You do get the chance to see the "animation".

"Reservoir Dogs style guide" is some confusing featurette that last 22 secs. Not worth looking at as I thought it`s another trailer.

There are 2 easter eggs, one is a DVD player by some company(I can`t remember). It is basically an ad and that means it`s worthless. The other easter egg is hilarious. This features Mr. Blonde and Marvin in doll form and it copies the infamous ear cutting scene from the live action one. In all, the extras would merit 7/9 out of 10 but I`m being generous by giving it 8/10.

There`s no proper making of documentary but it`s either the talking heads or nothing at all. What`s amazes me is the menus. On disc 1, it`s animated like newspaper cut outs and on the 2nd disc, it shows the famous Mexican shoot out at the end of the film. My advice: don`t insert the 2nd disc unless you`ve seen the movie as a whole.

Overall- Stunning debut by QT. Buy this version instead of the UK version although it contains an interesting article by Empire`s Kim Newman. Not only you get more features, it`s also cheaper.
posted by alias-rf2 on 4/8/2004 19:28