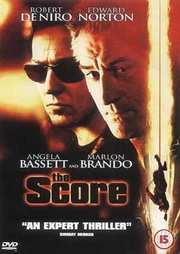 Synopsis:
Nick Wells (Robert De Niro) is ready to retire from crime. He`ll settle down with his girlfriend, Diane (Angela Bassett), and focus on running his legitimate business: a Montreal jazz club. But Max (Marlon Brando), his fence, friend and financial partner, has other plans for him. Persuading Nick to violate two of his most important rules - always work alone and never operate in the city where you live - Max teams him up with Jack Teller (Edward Norton). A young, aggressive, talented thief, Jack needs Nick`s safe-cracking talents to make his first big score: a prize worth millions locked behind the walls of Montreal`s Customs House. It`s a volatile combination in which egos clash and sparks fly, but the thrill of the heist has a grip on all three men, who won`t give up no matter what the risk. The Score is a slow burning, engrossing thriller with De Niro, Norton and Brando all delivering terrific performances.

The Score is an intelligent and gripping thriller that stars 3 of the greatest actors from the last 3 generations. We have from the days of old Marlon Brando (The Godfather, Superman), then from the last generation Robert Deniro (The Deer hunter, Goodfella`s), and to round things off nicely our very own Edward Norton(Primal Fear, American History X). With a cast like that how could the film fail. Put simply it doesn`t! The 3 actors work extremely well together, with none of them stealing scenes or hogging the limelight, and while for two of them this will definitely not be the best performance of their careers, it`s still by far the best they`ve done in a long time. Brando hasn`t been in a really big film since the 70`s so it`s nice to see him doing so well here, and it would be unfair to expect Deniro to give another performance like the one he delivered in Goodfella`s, though in this film he still gives us a performance on a par with classics like Backdraft. This is the best film that I have seen Deniro in since Heat, and it`s a great return to form for the actor who has been moving more and more into comedy lately (not that Analyze this wasn`t funny, but why Rocky and Bullwinkle?). Edward Naughton though gives us one of the best performances in his already brilliant career.

The films story is about a professional thief Nick Wells (Deniro) who as usual for this type of film is the best thief in the world, but he wants to retire. Of coarse his boss Max (Brando) wants him to pull off just one more job for him, unfortunately this is found in his home town of Montreal, the one place he`s decided not to steal from. Then he meets the promising young up and comer Jack Teller (Norton) who set up the job. Jack explains what it involves, and what it`s worth, and eventually Wells agree`s to the job. OK I know that this may not be the most original of stories, and you can probably guess most of the plot twists before the films even started, but don`t let that put you off because if you give the film a try then I think that you`ll be pleasantly surprised.

This film is absolutely packed with tension, with certain scenes being so edge of your seat that you`re very nearly falling onto the floor. Yes this is the films biggest selling point. It is unbearably tense though out, as the characters get thrown from one problem to another, and you never sure if it will end well or not. Again though this is mainly down to the cast as these three actors drag the film from the mundane to the gripping with relative ease. It`s very unlikely that this film would have been half as good with lesser actors in the role, but we have three of the greatest actors ever combining to make this film a hugely enjoyable thriller, so there. Oh but by the way, any Angela Bassett fans who`ve seen the trailer,don`t get too excited. Despite what the trailer shows, she has about 2 scenes in the entire movie, and nothing to do with the actual job, so don`t go expecting too much.

This is an average DVD in the extra`s department. We have some decent extra`s, but no frills attached. We have the theatrical trailer which is something that I always like to see, but unfortunately they have neglected to include any other trailers on the disk. On top of that we have a making of the score feature, which is always enjoyable but no other documentaries. A few deleted scenes which as usual were deleted for a reason and finally a directors commentary by both director Frank Oz and Director of photography Rob Hahn. I always like a good commentary and this one is decent, bringing the disk up an extra point.

The film has pretty good picture quality. It`s much better than VHS but anyone used to DVD will not be blown away.

Again it`s got good sound, but nothing spectacular. Occasionally the voices can sound a little muffled compared to other DVD`s but it`s still better than VHS.

The disk could have been better, but it`s still a recommended buy because this fantastic film should be experienced on DVD not VHS.
posted by moviebuff on 8/11/2002 18:05
7 / 10