Review of E.T. The Extra Terrestrial (2 Discs)
added by
RWB 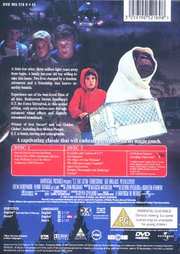 Back Cover of E.T. The Extra Terrestrial (2 Discs)

DVD
Back To The Future Trilogy (3 Discs) (UK)

DVD
Back To The Future Trilogy (3 Discs) (US)

DVD
Back To The Future Trilogy (Collector`s Edition) (UK)

DVD
Back To The Future Trilogy (3 Discs) (Australia) 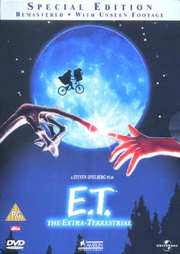 Synopsis:
E.T. - The Extra Terrestrial is the thrilling and deeply moving story of the special friendship that develops between Elliott, a lonely young boy living in a suburban Californian community, and a wise, benevolent visitor from another planet who becomes lost on Earth. As Elliott attempts to help his extra-terrestrial companion contact his home planet so that he might be rescued, they must elude scientists and government agents determined to apprehend the alien for their own purposes...which results in an adventure greater than anything either of them could have imagined.

Directed by Spielberg from a screenplay by Melissa Mathison and produced by Spielberg and Kathleen Kennedy, the film co-stars Dee Wallace Stone, Henry Thomas, Peter Coyote, Robert MacNaughton, and, at the tender age of six, DREW BARRYMORE (Charlie`s Angels, Never Been Kissed, The Wedding Singer, Scream)

For the 20th Anniversary edition, ILM (Industrial Light & Magic) completed the never-before-seen-footage, enhanced visual effects, and the transformation of guns to walkie-talkies.

E.T: The Extra-Terrestrial is the greatest story of friendship ever shown on the silver screen. A must-own, all-time classic film for every single generation.

Disc 2:
Space Exploration - Interactive journey into space (using hi-tech 3D graphics) and learn the identity of the planets in our solar system, their moons and atmospheres. Plus take a unique look at the major stars that form the known constellations. Once the graphics zoom into outer space and stop, click on the planet or constellations to hear information from Steven Spielberg or E.T.
The Evolution and Creation of E.T. - From idea to screenplay through casting and making the film. A unique look behind-the-scenes featuring never-before-seen footage from 1982, Henry Thomas` original screen test, talent interviews with cast and filmmakers and antics from on the set (50 mins).
The Music of John Williams - Interviews and footage of the long standing relationship between John Williams and Steven Spielberg (10 mins).
The 20th Anniversary Premiere - A rare exclusive look at the preparation, rehearsal and live performance of John Williams conducting the orchestra at the 2002 premiere at the Shrine Auditorium. Included in the footage will be the four-minute overture and light show, plus excerpts of the live performance with film clips (17 mins).
The Reunion - The cast and filmmakers reunite to discuss their thoughts on the impact of the film. Including interviews and additional excerpts from the premiere footage (37 mins).
E.T. Archives - Interactive environment for the consumer to view hundreds of production photographs, conceptual drawings and the original advertising
Trailers - Theatrical 2002 trailer and three other trailers
Total Axess DVD-Rom Feature - Featurettes for consumer viewing including premier footage, behind-the-scenes, junket interview excerpts, etc.

MOVIE
All I can say is that this is a perfect family movie, and a very sad one. If you don`t cry in this film you should either check your pulse or you`ve probably got something wrong with your tear ducts. It is wonderfully shot, probably Spielbergs best image work ever. The acting is truly wonderful, and you even have a chance to see Henry Thomas` (Elliot) screen test on this brilliant DVD. As for those hwo have spoken out about the digital changes to the film, I have to say that on the whole, it is good. I`m not one of those that desparately needed the original version, and I am quite happy with this new 20th Annniversary Editon. The new bath-time scene is wonderful, and most of the changes you won`t even notice. Some of the new E.T. facials do look a little CGI, and removing the guns looks silly because they now hold radios really high up in the air. But it is still the same wonderful movie, so I don`t really mind.

VIDEO
It just looks really good. The remaster is a godsend as a lot of the early parts of the movie are in the dark. Everything is very clear, and there are very few marks on the print at all.

AUDIO
All of Spielbergs new films now have DTS soundtracks on them, and his back catalogue is also getting a spruce up. E.T. is graced with both DTS and DD soundtracks, and they`re both very good. It`s not a new movie, so it`s not as powerful as those, but this is nothing to complain about, and it is of a very high quality.

EXTRAS
Unlike the quickly altered R1 version, we get some quality extras on th cheap set, whereas they got a two disc set with both versions of the film. If we want this we have to pay about £8 more for a three disc set. It was a bit messed up by Universal but still. It is very similar to the Jaws disc in that there is one major documentary taking in the whole process the movie went through. There is very good behind the scenes footage of Spielberg of Spielberg in drag and lots of E.T. designs, which also crop up in the galleries. Also in there is a deleted scene featuring Mr. Harrison Ford. Next up are a few smaller documentaries. One about the 20th Anniversary Premiere, and is in esscence a retrospective that gathers the whole cast back together. There is also a small featurette on John Williams the composer. Of note is the ROM features, which have some nice flash games and loads of downloadable items. On disc one as well, is a new audio track that is taken from the live recording that occured at the Premiere. Overall, very nice treatment of a classic 80`s movie. So Universal messed up a bit, but if you don`t mind losing the 1982 version, this is all good stuff.
posted by cartoonjonah on 6/6/2003 23:14