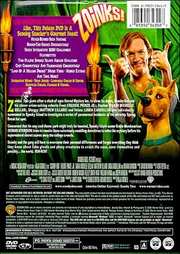 DVD
Dr. Seuss` The Cat In The Hat (Widescreen) (US)

DVD
Looney Tunes: Back In Action (Widescreen) (US)

DVD
Harry Potter and The Chamber of Secrets (Widescreen) (US)

DVD
Clash Of The Titans (US) 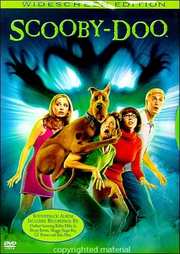 Concerned that his way cool theme park might truly be haunted, Spooky Island owner Emile Mondavarious (Rowan Atkinson) tries to reunite those notoriously meddling detectives to solve the mystery before his supernatural secret scares away the college crowds.

Scooby and the gang will have to overcome their personal differences and forget everything they think they know about fake ghouls and phony creatures to crack the case, save themselves and possibly… the world. Ruh-roh!

Scooby-Doo is an entertaining and fun filled movie that the whole family can enjoy. I am a great fan of the cartoon series. In this movie, the Scooby gang bust up over their involvements in the group and 2 years later, they are reunited to solve the mystery on spooky island run by Rowan Atkinson.

The movie itself is kind of silly but enjoyable. The only characters they got right however were Shaggy, Scooby and Daphne. So top marks to Matthew Lillard and Sarah Michelle Gellar. They had obviously been working on their characterisations. Lillard perhaps more so. Shaggy seemed to be the only rational character at times. Velma and Fred seemed to be competing with each other and arguing all the time which I have never seen happen in the cartoon series.
The movie displays some sentimental values about friendship but everything else is just pure fun. The whole movie I was just waiting for Sarah to kick ass Buffy-style and was so glad when it happened. The Daphne fight scene doesnt last that long but is technically and visually very good.

The picture is good for a movie with a lot of CG work but could have been better. The picture is sharpish but at times seems a little grainy. Overall it is colourful and pretty neat

The audio is clear and sharp, top notch stuff. The soundtrack sometimes got on my nerves especially the Outkast tune. The only good thing on the soundtrack is perhaps the revamped scooby doo tune which rocked.

There seems to be alot of extras but they seem to be mostly for kids. The menu is awful. Too much time was put into a menu that is generally all over the place. How difficult is it to just have a straight list with some nice stills or videos in the background??? The music on the main menu is the outkast tune and like I said earlier it really sounds awful and got on my nerves.

The deleted scenes are great. They should have used the deleted opening as its cooler. There are some really funny scenes that were cut including one with Velma singing and another with her looking extremely hot. There are lots of other things like commentaries, games and some good making of featurettes. A great package extras wise.

The TV series of Scooby Doo has made its way to its first movie. Starring Matthew Lillard, Sarah Michelle Gellar, Freddie Prince Jr, and Linda Cardellini as Shaggy, Daphne, Fred, and Velma. However at most times, the film is immature and full of potty humor. A quite poor adaption of the TV show.

After Shaggy, Daphne, Fred, and Velma go there sepereate ways, they all get invited to a mysterious carnival to solve a mystery. Many people seem to be under a spell and they are acting quite odd. It is up to the group of long lost buddies to do what they are the best at and solve the Mystery. The film is full of dumb characters, and the monsters and ghouls are a joke. Matthew Lillard does a good job as shaggy, and Scooby Doo`s character is likeable but the movie is almost plotless and leads to nothing. The movie contains farting contests, and many things you woudn`t expect in a movie aimed towards kids. Such as Fred`s characters explaining he is turned on by nerds, or saying he wants to look at himself naked when his soul goes in Daphne`s body by mistake. Maybe kids will think this potty humor is funny, but to me it was a dissapointment and makes the TV show look bad.

Scooby Doo looks good, and quite sharp and colorful throughout the film. It`s obvious scooby doo is computer animated but he looks very sharp nonetheless. The Sound is also good, if not annoying.

The features of Scooby Doo are quite a treat. There is never before scene footage of the movie and a Behind-The Scenes Documentary. One of the better features is the interactive ROM challenges, or games you can play on your PC, some of them are quite enjoyable. There is also a Two-Player Arcade Game. There is commentary by the actors of scooby doo and the filmakers. There is a Music Video "Land Of A Million Drums" and there are some fun hidden extras. For young kids, the games, and arcades on this dvd give the features a plus. If you are older, the features may not be as exciting, but are still much better then average.

Overall I give Scooby Doo a 6/10 due to its good features, video, and sound. The movie itself is one that I don`t ever want to view again and the plot is absurd. If you absolutely love the TV show or enjoy pointless, immature, and stupid humor then Scooby Doo may be a movie for you, otherwise, i suggest you stay away.
posted by Aaron Arneson on 27/2/2003 17:07