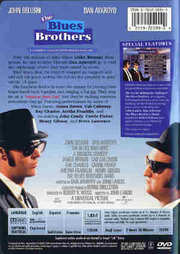 Back Cover of Blues Brothers: Collector`s Edition, The

DVD
Lost in Translation (Widescreen) (US)

DVD
Thing, The: Collector`s Edition (US)

DVD
Roger & Me (US)
Related Articles

Blues Brothers: Collector`s Edition, The (US) 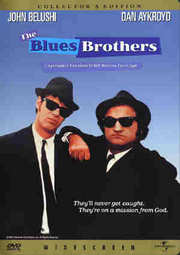 Synopsis:
Jake and Elwood Blues, aka The Blues Brothers, attempt to reform their band and play some gigs, in order that they can raise the cash to save the orphanage where they grew up. No easy task, despite being on a "mission from God", as they are pretty much on the run from the authorities the entire film, alongside a few people upset along the way. Lots of car chases, musical numbers, famous cameo appearances, and visual gags in this fully restored Director`s Cut version of this remastered movie.

Introduction
Quote:
It`s 150 miles to Chicago, we`ve got a full tank of gas, half a pack of cigarettes, it`s dark and we`re wearing sunglasses...... hit it
One of the immortal lines from the film. A film which strangely didn`t do that well on its first release on the big screen. It has now, however, becomes somewhat of a classic.

Its hard to categorise this film.
It could easily be described as a musical, there are any number of musical numbers and dance sequences.
Quote:
"Are you the police? No, ma`am. We`re musicians."
It could also be an action film, it did after all hold the world record for the number of cars crashed.
Quote:
"Our Lady of Blessed Acceleration, don`t fail us now. "
It could and indeed is tagged as a comedy, the jokes keep coming and coming, at a constant rate.

The Plot
Jake has just got out of Jail, and is picked up by his brother Elwood.
They quickly get involved in a plot to raise some needed tax money for their old catholic orphanage school, $5000 in fact. And so starts the mission, a mission to put the band back together and raise the money doing gigs.

Quote:
"First you trade the Cadillac for a microphone. Then you lie to me about the band. Now you`re gonna put me right back in the joint.
They`re not gonna catch us. We`re on a mission from God. "
This involves making quite a few enemies along the way.
The police want them for numerous offences, a bar owner wants them for money, a Country and Western group want them for stealing their gig, the Illinois nazi party want them for wrecking one of their marches, one of Jakes old flames wants him dead for jilting her, ... you get the picture. They are collecting enemies at a formidable rate. But they are on a mission from God, and convinced it will all come out right.

Quote:
"What kind of music do you usually have here?
Oh, we got both kinds. We got country *and* western."
Throughout there are any number of excellent blues tracks, and a veritable who`s who of the R&B scene perform throughout. When I first saw the film, I had no idea this was the case. I vaguely recognised Aretha Franklin, and Ray Charles, but hadn`t
heard of the rest.
I love the dance number outside Rays music exchange, possibly my favourite scene in the movie.
Apparently it was filmed on a freezing cold Chicago day, but you wouldn`t know it.

Quote:
"Use of unnecessary violence in the apprehension of the Blues Brothers HAS been approved."
The car chases are hilarious, and get steadily bigger and bigger as the enemies accumulate, ending with something special.
There are a number of cameo roles too - from the Frank Oz, to Steven Spielberg, Twiggy to the director John Landis.

Quote:
"We had a band powerful enough to turn goat p*** into gasoline."
The Video/Audio
The video and audio are ok. Neither will win awards for excellence, but then the film is more than 20 years old now, and the sound has been remixed into 5.1.

The Extras
In this edition of the DVD we get some extra footage originally cut - which is possibly only of interest to dedicated fans. It doesn`t add a whole lot.
There is a making of documentary that puts most making of`s PR fluff to shame.
It covers huge amounts of material, and there are some great gems of information.
The fact that Dan Acroyd is a real "petrolhead" and has driven coast-to-coast across the USA any number of times.
When he turned in the script it was about 4 times as long as the usual sort of script, it was his first and he wrote down everything!
The chicago scenes were really filmed with the car going at over 100MPH through the streets. They had to close down bits of the city and get stunt pedestrians in.
When one of the cars dropped from a vast height, they actually had to get an Air-UN-worthyness certificate from the FAA to be guarantee that it would not fly.
The mall scene was filmed in a real but abandoned mall, and they got some shops to set up in a publicity deal. So there were those shops they could trash, and those they couldn`t.
Also the fact that some of the R&B singers so "go" with the music, that they never perform the same song the same way twice, which makes overdubbing them a huge nightmare.
All sorts of delightful detail to be found here.