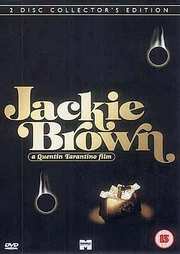 What do a sexy stewardess, a street-tough, gun runner, a lonely bail bondsman, a shifty ex-con, an overambitious cop and a stoned-out beach bunny have in common? They`re all chasing a half million in cash. The only questions among these players are who`s conning who...and who`ll walk away with the goods?

1997`s Jackie Brown was Quentin Tarantnio`s followup to the criticaly acclaimed and commerically successful Pulp Fiction.
The film, which is adapted from Elmore Leonard`s novel Rum Punch, deals with six people who are all after the same thing: $500,000 in cash! Jackie Brown may not be as good as Pulp Fiction but it`s still a damn good film.

The picture quality is excellent as you would expect from a 1997 film. The sound is also equally good.

Extras include an introduction from Quentin Tarantino, a 40 minute documentary How It Went Down,
deleted scenes, a 55 minute interview with Tarantino, Chicks with guns video, Siskel & Ebert At The Movies, MTV promotion, stills galleries, text information, trailers and ,for some bizzare reason, trailers for Robert Forester and Pam Grier films.
As with the Pulp Fiction disc, the best extras are the documentary, interview and deleted scenes.

The year is 1997, your one of the hottest directors in Hollywood where do you go from there?

Jackie Brown is the follow-up to Director Quentin Tarantino's 1994 internationally acclaimed film Pulp Fiction, A movies about money, lies, and some more money…

The titles character Jackie Brown (Pam Graier) is an average 40 year old black woman, trying to scrape a living working for one of the worst airlines in America, the story begins when coming back from a flight carrying $50.000 and a bag of Cocaine, and she gets intercepted by ATF.


I'm not going to say anymore as it will spoil the story, because this is one film that reveals information gradually, it doesn't bombard you with images and sounds, it takes it time, some may think it's to slow paced but I think it's letting you get used to the characters, and ease the story out bit by bit.

I never had the pleasure of witnessing the original R2 DVD, but this one is quite a treat, Jackie Brown isn't exactly a old film (it is 4 years old) but the print is excellent.
Presented in 1:85:1 Anamorphic Widescreen, the transfer is top quality, with colours set just right, and shadow levels not to dark and not to bright.

Now there are quite a decent couple of soundtracks on this here disk, we get the choice of Dolby Digital 5.1 or a nice DTS 5.1 track.
Now neither pushes your system to the max, but both provide a decent experience.
With the main focus of Tarantino's films being the well written dialogue, there is little to no action, but the surrounds are used well when the great 70's music kicks in.

Now this is why those good people at Buena Vista released an brand spanking new 2-Disk Collector's Edition, now to be honest I feel a little let down.
Tarantino fans where looking forward to a Commentary but all we get is a few Featurettes an Interview with the man some deleted scenes.
They do what they say on the tin but leave you wanting more.

The film is excellent, although not better than Pulp Fiction, for the money it's worth it for the film in my opinion, but if you're after deep insights into the film then don't hold your breath, Jackie Brown is a smart, funny and thrilling tale of double crossing.
posted by Kain^ on 14/11/2002 14:37