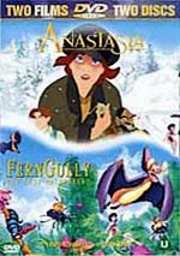 Synopsis:
Anastasia Based on a true story and brought to life with stunning animation and the voices of Meg Ryan, John Cusack, Kelsey Grammer, Hank Azaria, Christopher Lloyd and Angela Lansbury, Anastasia is an epic tale of breathtaking action and intrigue certain to captivate the entire family. A spellbinding mix of adventure, romance, comedy and music, this acclaimed animated spectacular tells the thrilling story of the lost Russian Princess Anastasia and her incredible quest to find her true identity.
FernGully - The Last Rainforest Magic and adventure await in FernGully, a spectacular rainforest where a bat named Batty, whose radar has gone haywire, joins together with Crysta, Pips and the Beetle Boys to save their marvellous world from the evil Hexxus. Ignoring the warnings of her friends, Crysta, the curious tree fairy, explores the world beyond FernGully. She discovers Zak, a real live human who is helping to demolish the rainforest. Once Zak sees the beauty and magic of FernGully, he vows to save it. But it may be too late. The diabolical Hexxus is on the loose and intent on destroying all of FernGully. This animated feature rocks with an original score performed by Sheena Easton, Raffi, Tone-Loc and others.

Special Features:
Anastasia Featurette `The Magical Journey of Anastasia`
Making of
Sing-alongs: `Once Upon A December` and `Learn To Do It`
3 interactive puzzles
Clip reel - including two songs