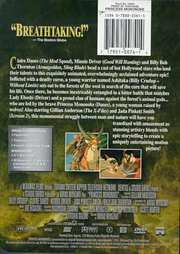 DVD
Spirited Away (US)

DVD
Castle In The Sky (US)

DVD
Whisper Of The Heart 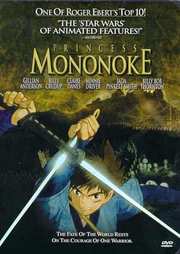 Synopsis:
Claire Danes (The Mod Squad), Minnie Driver (Good Will Hunting) and Billy Bob Thornton (Armageddon, Sling Blade) head a cast of hot Hollywood stars who lend their talents to this exquisitely animated, overwhelmingly acclaimed adventure epic! Inflicted with a deadly curse, a young warrior named Ashitaka (Billy Crudup - Without Limits) sets out to the forests of the west in search of the cure that will save his life. Once there, he becomes inextricably entangled in a bitter battle that matches Lady Eboshi (Driver) and a proud clan of humans against the forest`s animal gods... who are led by the brave Princess Mononoke (Danes), a young woman raised by wolves! Also starring Gillian Anderson (The X-Files) and Jada Pinkett Smith (Scream 2), this monumental struggle between man and nature will have you transfixed with amazement as stunning artistry blends with epic storytelling to create a uniquely entertaining motion picture!

For those of you unfamiliar with "Princess Mononoke" let me first point out that the film may not be what you'd first expect. This is not an overly romantic children's story, and it is also not the High Fantasy film the cover may make you believe. "Princess Mononoke" is an extremely intelligent and sophisticated animated feature film that is a beautiful metaphor for the environmental disasters caused by industrialization and its successive greed. Presented in hauntingly beautiful pictures and a fascinating story, director Hayao Miyazaki and his team of artists have created a film that makes you ponder more than any other animated feature I have seen.

In the Japanese countryside, a beast is attacking a peaceful village. Ferocious and oozing evil, the demon beast kills everything in its path and only a heroic attack by Ashitaka, the prince of the village, puts a stop to it, just before it can lay waste to the village. But the victory has a price. Ashitaka has been infected by the demon's curse and the village wise woman tells him that the disease will spread and eventually kill him. Hatred is the source of the demon that possessed the monster, which turned out to be a giant boar, and a small iron ball inside his flesh seemingly caused it. The only way to heal his own curse is for Ashitaka to find the origin of the hatred and placate it before it consumes him. Ashitaka sets out to find the source of the iron, and after days of traveling he finally finds it. But it is not what he expected it to be. The evil is mankind itself. A city, ruled by Lady Eboshi, is making a living on forging iron and building rifles and guns, which in turn they use to kill the local wildlife to expand their own dominion. Lady Eboshi has also cleared large areas of forest, effectively destroying the wildlife habitat it represented. The animals are in an uproar over her killing spree, fearing she may even kill the Forest Spirit itself, the superior being that reigns over life and death in the forests.
San, is a young girl, raised by wolves, who is also known as "Princess Mononoke," and she is determined to stop Lady Eboshi. She takes every opportunity to try to kill Lady Eboshi and her people, not seeing that she is effectively driven by the same hatred and greed that makes humans her enemies. When Ashitaka begins to understand the implications that are the root of the problem, he becomes the target for both sides. Whom should he help? Lady Eboshi in her quest to dominate the world, or the animals and trees in the forest, to save their homes?

"Princess Mononoke" is a fable in the most classic sense, like Aesop's Greek fables. It uses animals to a large degree to convey its messages, and it has a final morale that should leave the viewer thinking about what they have just seen. Unlike standard fairy tales, classic fables try to bring across a message, a deeper meaning, and "Princess Mononoke" fabulously manages to do just that in a way that is thrilling and educating. The movie touches upon many social aspects, ranging from hate and greed to humanity and sympathy, all brought out by characters and their many traits. No one in the film is only good or only bad, as exemplified best by Lady Eboshi and her many facets, and of course the Forest Spirit itself, the bringer of life AND death - which incidentally is beautifully shown through its footsteps, where we see flora grow at first wherever its foot touches the ground, and then immediately wilt and die.
To the observing viewer, the film is filled with such metaphors, which immediately invite repeated viewing. The beauty of the film also lies in the fact that the artists use their medium to create visual language that is unlike anything live-action films could possible portray - although with current CGI technologies, it may actually be possible to realize the film as a live-action feature. The visuals are sometimes realistic, sometimes impressionistic, and almost abstract at others. Yet it is this use of the film as an artistic form that makes "Princess Mononoke" a visual feast full of beautiful imagery and a visual eloquence that sets it above your standard animated feature.

It is easy to see why Miramax, part of Walt Disney Pictures, bought the rights to the film, and equally easy to see why the people in the animation division tried to have the film buried. "Princess Mononoke" was given a limited US release and no main release in Europe.

Buena Vista Home Entertainment is presenting "Princess Mononoke" in a beautiful Widescreen presentation enhanced for 16x9 television from the film's original 1.85:1 ratio. The result - mesmerizing! The print used for this transfer is free of any blemishes, speckles or other deficiencies, creating an absolutely clean and solid image. But it is ultimately the fantastic colour palette that breathes life into the film, and this DVD does a marvellous job capturing and reproducing these colours to the point that they truly leap off the screen. Lush greens, vivid blues, powerful reds, and all in-between are remarkable well delineated in this transfer, making it an experience to remember. The incredible level of detail found in the transfer and the entire lack of distracting edge-enhancement further enhances the magnificent image quality. The solid blacks finally dot the i, and give the transfer depth and balance, making it clear that this is a DVD that someone paid a lot of attention to. The presentation is also free of any compression artefacts, leaving the high definition fully intact and maintaining the sharply defined lines that make up much of the film's animation style. As I mentioned above, Buena Vista Home Entertainment took the DVD back to the drawing board at one point to add the original Japanese language track to the disc. As released; "Princess Mononoke" contains English, French and Japanese 5.1 channel Dolby Digital audio tracks. No matter which one you prefer and choose, either one is extremely well produced and clear. I was surprised at how well even the English dub of the film was done, and how well the voices matched the characters. Dialogues are very clean and understandable, and the music and sound effects are also well integrated. Surround usage of the audio track is somewhat limited, but he tracks make very good use of the front sound stage with a wide stereo field.

Interestingly, "Princess Mononoke" contains two different English subtitle tacks. The first one is the subtitle track for the English dubbed version of the film, which is, naturally, not literally translated and a bit freer flowing. Just like the Japanese audio track, the second subtitle track is for the purist fans, containing the literal translation of the Japanese audio. Is was very surprised - and pleased - by the extra effort Buena Vista Home Entertainment put into this end of the release to make sure to cover all ends.

Apart from the stellar presentation of the feature film itself, the DVD also contains a few supplements, such as the film's theatrical US trailer and a 5-minute featurette, containing interviews with many of the voice talent who stood in for the American language version.
posted by Tony Myhill on 14/4/2002 18:42
9 / 10

Content:- A very enjoyable film to watch, and mostly pretty hypnotic thanks to the amazing animation. The only fault that comes to mind with this film is that it does seem to be paced a little slowly at first, but it definately gets there in the end. The characters are all fantastic, and it`s really interesting to watch as you are never really sure who the bad guys or girls are. The voice acting is a bit bland in the English dub, but the Japanese one is suitably frentic, and definately the superior choice.

Video:- Glorious animation brilliantly displayed here. Very VERY colourful and smooth, with no visible signs of compression, at least not to my tired eyes.

Audio:- A pretty nice track here. The English and Japanese tracks are both the same DD5.1 mixes, the only difference being the language of course. They are both quite impressive, with a few nice moments with some fun bass and satellite action. A good show.

Features:- This is the weak point of the disk. All that is on show here is a few bland extras. Nothing amazing really.

Overall:- The film is strong enough, and strongly represented enough to justify buying this even with the bland extras. A very good film indeed.
posted by Blazingmonga on 16/4/2002 03:08
8 / 10

I was really not expected much when I saw this film. Firstly, I'm not really a fan of anime, and secondly, I was only watching it because it had been recommended to me by a friend who used words such as 'wonderful' and 'amazing' when describing the film. while this may appear to be a good thing, for some reason it usually ends in disappointment. This is usually either because the film in question is either not very good, or that my expectations are so high after the amazing/wonderful speech that god himself could create a film of monumental proportions, and I would still say "well, that was ok…".

Anyway enough of my ramblings… happily this is not one of those films. It's a delightful piece, presented with a great transfer. If you've never watched anime before - this film is a great starting point. It has a great story, great animation, and is generally easily accessible. Despite the poor extras, recommended.
posted by Rich Davies on 16/12/2002 23:09