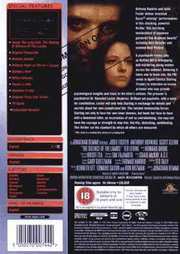 Back Cover of Silence of The Lambs, The: Special Edition (2 Discs)
Related Items

Silence of The Lambs, The: Special Edition (2 Discs) (UK) 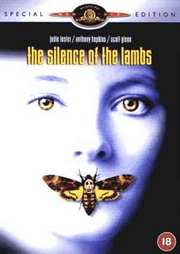 To enter the mind of a killer she must challenge the mind of a madman
Certificate: 18
Running Time: 113 mins
Retail Price: £24.99
Release Date:
Content Type: Movie

Synopsis:
Anthony Hopkins and Jodie Foster deliver knockout Oscar Winning performances in this shocking, powerful thriller. This terrifying masterpiece of suspense garnered five Adademy Awards including Best Director and the coveted Best Picture.
A psychopath known only as Buffalo Bill is kidnapping and murdering young women across the midwest. Believing it takes one to know one, the FBI send in Agent Clarice Starling to interview an insane prisoner who may provide psychological Dr. Hannibal Lecter. Brilliant yet psychotic, with a taste for cannibalism, Lecter will only help Starling in exchange for details and secrets about her own complicated life. This twisted relationship forces Starling not only to face her own inner demons, but leads her face-to-face with a demented killer, an incarnation of evil so overwhelming, she may not have the courage or strength to stop him. Horrific, disturbing, spellbinding. This thriller set the standard by which all others are measured.

Everyone has heard of Dr Lecter. Silence Of The Lambs
introduced us to the `Hopkins` version (and the best version) of him. Silence Of The Lambs is without doubt the best of the Thomas Harris novels made to film. As it goes it`s `Manhunter`
(also very good) `Silence Of The Lambs` `Hannibal` and out this week in UK theatres `Red Dragon` a remake of Manhunter,
but this time starring the `Hopkins` version of Dr Lecter. Sir Anthony Hopkins gave a chilling performance in this role, and
you can feel the menace and danger from his first scene. Jodie Foster gives a typical quality performance, and the bond between the two characters is there for all to see. (It`s a just a tragady Foster was not in Hannibal) Special mention must go to `Ted Levine` too, who gives us a truly scary `Buffalo Bill`. This film is dark, and the word `horror` springs to mind on more than a few occasions. The visual is good, this film is more than 10 years old now! Sound is also good with plenty eree and unsettling noises, and music throughout, which are vital to the film. With Silence Of The Lambs being such a quality film, it`s great to see it with a special edition, and a good few extras. There is a making of, featurette, out-takes, deleted scenes, phone message? TV spots etc. and a trailer for Hannibal. Overall this is a top quality film, the pick of the
`Dr Lecter trilogy` and this special edition does the film justice.
A must for all film fans.
posted by Andy Hall on 19/10/2002 19:41
8 / 10

With the theatrical release of Red Dragon, and having just bought Anchor Bay's Manhunter I thought I'd give this a review.

This is the second film to feature everybody's favourite Cannibal, Dr. Hannibal Lecter but this is the first time we see Sir.Anthony Hopkins in the role of the character.

As with Manhunter/Red Dragon this follows the story of Clarice Starling (played superbly by Jodie Foster) being assigned to the Criminal Psychology department of the FBI sent to interview Hannibal lector on advice to help the FBI capture the Serial Killer "Buffalo Bill", a killer who kidnaps woman and then their bodies are found mutilated.

This is very intense, with a lot of suspense placed on the viewer.
Can the FBI catch Buffalo Bill before he kill his latest victim, while Clarice reads into Lecter's words to who Buffalo Bill is and where he can be found.

Picture is presented in 1:85:1 Anamorphic Widescreen, which compared to my Pan And Scan VHS is excellent, the Dark scenes in Lector's Cell are dank and eerie with many darks, browns and blacks looking better than ever.

We get a newly remixed 5.1 Dolby Digital track, which is excellent, it isn't used to full affect with this film, with much of the surround activity being used to ambient sounds and the superb score, but with that small quibble aside the films score is excellent, and the dialogue is clear and understandable.

The Region 2 was given a 2-Disk Special Edition, while the R1 was given a 1-disk, before you go "wow we got more extras" look again, we get the exactly same extras as the R1 only MGM has opted to put the extras on another disk, probably to ask more money for it.

But that aside, the extras are quite special, not out of the ordinary but special non-the-less.
There is No Audio Commentary which came as a shock to me, I would've loved to hear the 2 main stars (Hopkins and Foster) along with Demme describe their experience making this movie but I suppose MGM will release a 20th Anniversary DVD with a Commentary.

Inside The Labyrinth: The Making of Silence of the Lambs (new 2001 Featurette)
Original Featurettes
Phone Message by Hopkins (quite Amusing, doubt anyone will watch more that twice)

With the usual stuff like Galleries, Outtakes and trailers.

This is one film I never tire of watching, even though you know how it turns out, jam packed full with different elements and fine acting with a package that doesn't go over the top with pointless extras, but makes you feel like you've got your moneys worth.
posted by Kain^ on 21/10/2002 06:30
10 / 10

Movie- A serial killer, who indulges in capturing and skinning female victims is on the rampage. An FBI rookie named Clarice Starling is assigned to this case. She interviews an insane prisoner named Hannibal Lecter, who indulges in cannibalism. The psychiatrist-turned-psychopath will only help Starling in exchange for details and secrets of her personal life. Will she give in and tell the psycopath her personal life or will the serial killer claim his next victim?

Silence of the Lambs is adapted from the book of the same by Thomas Harris. Being the 3rd film to win all major categories in the Oscars, this is one film that will leave you bemused. The violence is more psychological rather than on screen gore which many horror films have.


Video- Present in 1.85:1 anamorphic widescreen, colours are vibrant. Blacks are black, browns are brown. There are only some faults in the transfer especially in the beginning where lots of black specks can be seen but you have to focus on the picture and not the film. The picture is a litte soft at times. Overall, a great transfer.

Audio- Audio is acceptable although I`ve heard worse re-mixes than this one. Re-mastered in DD 5.1, dialogue is clear and Howard Shore`s booming(and disturbing) score makes good use from all speakers. This most memorable quote is "A census taker once tried to test me.....I ate his liver with some fava bean and a nice chianti...*slurps*". It will send shivers down your spine. One downside in the audio department is the exclusion of the original 2.0 surround. This is will definately anger purist. It`s a subtle mix, like with other MGM dvd releases.

Extras- Again, acceptable but better than other dvd releases. I was expecting an audio commentary on the first disc. A shame. The previous DVD release in the US had a commentary from Demme and co. I wish if the same commentary was put into here. Better keep that old copy then.

Moving on to the 2nd disc we get an hour plus documentary Inside The Labyrinth: The Making of Silence of the Lambs. This features new interviews with many of the cast and crew expect for Demme and Foster who appear in archive interviews from 1991, around the time when the film was released. It`s a shame really since the interviews with the crew mention about Demme as if he`s dead. Very insulting. Apart from that, it`s a well made documentary. One interesting insight is that the serial killer is taken from the elements of 3 real life serial killers.

MGM`s standard practice is to included a featurette made around the time of the release. It`s 7 mins long and add little value to the package. The featurette includes archive interviews with Demme, Foster and Hopkins all discussing what the film is about etc.

The 2nd disc boosts 20 odd deleted scenes. They are presented in letterbox format and of poor quality. Lots of grain and flecks of dirt appears constantly but I`m not suprised since they are deleted. The total time for all the scenes are about 20 mins.

Finally there is an outtake reel(hilarious), galleries and an amusing phone message by Hopkins(in character) to scare your friends. Well, maybe not. :)

As a standard practice from MGM, they have provided a booklet for the SE releases and gives insights into the production of the film and the some-what pretencious info about widescreen and preserving the director`s vision.


Overall- Silence of the Lambs set the standard in the thriller genre. Another good release from MGM. This is one film worth looking again and again. The synopsis on the back of the DVD does what it say on the tin: very disturbing and powerful. If there is no Silence of the Lambs, then there would be no X-Files and no other thriller genre. Worthy of recieving 5 oscars and truly deserving the modern classic status. If this is not in your top 30, then hang your head in shame(or get eaten).
posted by alias-rf2 on 1/6/2004 22:51