Review of Amelie
added by
Jitendar Canth
Places to Buy

DVD
Brotherhood of The Wolf (UK) 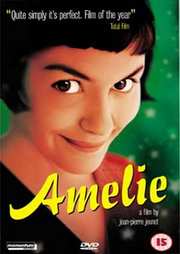 Synopsis:
Amelie tells the story of Amelie Poulain, a young French girl who has been brought up by overprotective parents. As soon as she is old enough, Amelie leaves the suburbs for Paris where she finds work as a waitress in a cafe.
Life is pretty uneventful until her chance discovery of a tin box containing a schoolboy`s long forgotten memories. She returns the box to its now middle-aged owner and it is then that Amelie discovers her true vocation in life - righting the wrongs and helping others find love and happiness.

However, something is missing from her own heart, and when a mysterious photo-album lands at her feet, it sets her on a delightfully twisted path through the Parisian streets to meet its handsome, mysterious owner and her own destiny.

I think you will know, the outline of the story to this film, it has been well covered, elswhere.

So the film - is it any good? you ask...Well I would have to put this down as one of my favourite films of all time...It`s a little soppy in places but never enough to make you gag.

I`ve seen it a good handful of times now and it just leaves me feeling euphoric. Amelie really is the ultimate feelgood film. Great characters, script, cinematography, in fact it`s just great in every way...you really haven`t seen anything like this I promise you.

The picture is crisp and clean with great use of colours. While the soundtrack is fun and beautifully interwoven into the dialogue. There`s a DTS track here which seems a bit crisper than the DD with a bit more oomph....
posted by richard augustus on 24/4/2002 19:49
8 / 10

Nominated for 6 Oscars, winner of 2 Bafta`s (nominated for seven more) "Amelie" (or Le Fabuleux destin d`Amelie Poulain) is one of those rare commodities in film these days, a charming delightful story of innocence. "Amelie" has become the most commercially successful French film since Cyrano de Bergerac, and is an enjoyable, beautifully made and occasionally thrillingly original piece of work. The story itself is simple. "Amelie" (Tautou) is a somewhat lonely young woman whose early life has been one of escape into fantasy because of her father`s emotional isolation and then her mother`s death by a suicidal tourist. Working as a waitress in a Monmartre café, she encounters the limping owner Suzanne (Marier), the hypochondriac tobacconist Georgette (Nanty), the `jealous guy` Joseph (Pinon) and the frustrated writer (Artus de Penguern). However, due to an incident in her apartment when she learns of Princess Diana`s death, she finds a mysterious box of personal effects. Amelie decides to reunite them with their owner, and if it is appreciated she will do other good deeds. And what, exactly, is Nino Quincampoix (Kassovitz) doing with the old photographs from Metro photo-booths? And who is the person who`s torn up photos are found near all the booths?

Jeunet enlivens the plot with an array of stylistic tricks, including outrageous fantasy scenes, camera effects and hilariously bizarre narrative detours, such as Amelies` fantasy of what, exactly, might have caused Nino`s lateness at a rendezvous.
The script rises to the occasion of this insane verve, with minor characters` likes and dislikes being described in short, surreal scenes throughout.
Yann Tiersen`s jauntily score works wonders at managing to use the accordion in a surprisingly fresh and non-clichéd fashion. The film is consistently enjoyable, engaging, surprising and funny - in fact the narrative use of the central character remained me of the eponymous Jacques Tati and his M Hulot - as well as being a persuasive argument against French films being little more than bored intellectuals discussing Life, The Universe, And Everything (to which they never get to the correct answer - 42).

Amelie herself is appropriately charming, winsome and sympathetic. It`s a given from the outset that Amelie will indeed transform the lives of those she comes into contact with (with one amusing exception), just as it`s obligatory that she and Nino will fall in love through their exploration of mutual quirks. An Americanised remake of the film (and such a horror has been mooted) would almost certainly reduce "Amelie" to little more than another Meg Ryan/ Lisa Kudrow airhead, and it is to Jeunet`s credit that his direction supersedes the predictable plot with some genuine moments of magic and joy.

The performances are all excellent, with Tautou now something of a superstar in France because of her charmingly offbeat performance; she has the rare ability to be very attractive and somewhat odd-looking at the same time, one that comes in incredibly useful for a girl who, we are informed by the stern-sounding narrator early on does not have a boyfriend- `she tried once or twice but the results were a letdown`. Kassovitz meanwhile continues his move towards international stardom with his charming performance as the romantic lead. The rest of the supporting cast are all fun, with many of them very well known in Continental Cinema especially Jeunet regular Pinon, who apparently expanded a tiny and insignificant role into one of the comic highlights of the piece.
This is film is vastly superior to the majority of films released, and should be compulsory viewing for American directors who want to make romantic comedies.

One of the film`s many pleasures is the vibrantly beautiful colour scheme used throughout, with a computer-enhanced Paris looking absolutely glorious throughout, if far too attractively to be true. Therefore, any DVD presentation of the film would demand high-quality picture presentation, which is provided stunningly here. Colours are crisp, clear and strong throughout, and there are no noticeable imperfections in Momentum`s transfer, which does the difficult job of making the film look appreciably better than it did in the cinema.

French Dolby and DTS soundtracks are both provided, (Jeunet has made it clear he will not agree to an English dub of the film) thankfully with English subtitles for those of a less than bilingual nature. Both are exceptionally clear, with the score and dialogue coming through incredibly well, and intelligent use being made of surround effects throughout - the DTS is of cause fuller and more vibrant, but if your system does not do DTS then the Dolby 5.1 is still very good.

On this British version of the film (the copy write is most insistent that it is not sold anywhere else) the commentary is the sole extra and Jeunet does and excellent job in describing the joys and problems of making the film although the absence of even a trailer makes this a rather lacklustre set of extras.

The 2 disc Special Edition version of the film contains the same extras as the French version, but for whatever reason Momentum delayed the release of the 2 disc set until 3 months after the single disc version, and as I never seem to revisit the extra disc (although I would like to see the extras) I will stick to the film itself.
posted by Tony Myhill on 26/7/2002 19:55
8 / 10

An outstandingly good film. arriving amid another endless stream of hollywood remakes and bravado macho bull**** this absolutely shines. Every inch of celluloid looks and feels beautifully crafted with some brilliantly acted characters (even a good performance from the director of La Haine as the eccentric collector of passport photos)
posted by Rawshark on 29/7/2002 00:59
8 / 10

Amelie is a wonderfully uplifting motion picture that features a sparkling performance by Audrey Tautou in the lead role. Tautou brings Amelie to life with a delightful mix of shyness, energy, and mischievousness. It doesn`t take long for Tautou to win our sympathy, and, once gained, it`s something she never loses. It isn`t difficult to understand why this movie has been such a success with audiences around the world - it`s the kind of motion picture that`s both intelligent and immensely likable - just like the main character.

One of the most intriguing aspects of the film, aside from its visual vivaciousness, is the manner in which Amelie chooses to help others. Rather than going about things in a straightforward manner, she devises stratagems. Her father has a hidden desire to travel, so, in order to bring his interest to the surface, Amelie kidnaps his garden gnome and has it photographed in front of various geographical landmarks around the world. For a neighbor who cherishes old love letters from her dead husband, Amelie fakes one that was "recently found". And so on... Throughout this movie, Jeunet keeps us guessing whom Amelie will help next, and how she will choose to do so.

It is beautifully shot and skips along at a wonderfully merry tempo. From the opening narrative we are drawn into the film and enmeshed in Amélie`s fantastic world. Jeunet`s use of colour creates a gorgeous pastiche, one that reflects Paris as a dream world. Supporting the luxuriant tempo the dreamlike score created by Yan Tierson completes the surreal atmosphere. It swamps you in a warm glow of satisfaction, one that has hardbitten, cynical journalists leaving the screening with great big smiles splashed across their faces. I have never seen a film quite like it and neither, in all probability, will ever see one again. Once and for all, Jeunet has atoned for Alien Resurrection.

I`m not much of a Francophile, but this disk was on offer, and seemed to be the subject of some decent reviews. So why not give it a go.

I thought the French dialog with English subtitles would be a little wareing after a time, but after a while you don`t really notice it anymore. It certainly doesn`t spoil the enjoyment of the film.

A good story, slightly quirky. A few twists and turns in the plot keep you guessing a little.

Video transfer was good enough, the sound nothing particularly special as you might expect in a mostly dialog film.