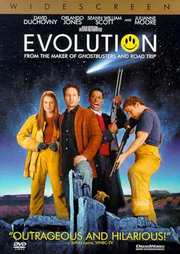 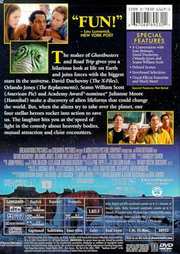 Back Cover of Evolution
Related Items

This well made sci-fi spoof brings a lot of ingredients together which makes a good movie, combining special effects, humour and a good cast for starters. The plot is about a group of scientists finding alien lifeforms and discovering their abilities to evolve fast, and potentially spreading all over the place. The scientists discover that the only weapon to wipe the aliens away is `celenium` which is an ingredient found inside shampoo. Casting David Duchovny in this movie was a good choice as everyone knows him through the Fox Mulder character in "The X Files" series and movies, he fits the bill but does tone down the seriousness of himself to fit in with the spoof nature of the script. Julianne Moore plays a beautiful government epidemiologist who is sniffing around what the scientists have found and wanting to be a part of it. Seann William Scott (American Pie 1 & 2) plays a hapless wannabe fireman and puts a shine on the comical side of things and tones down the seriousness about aliens, creatures and government related facts. Orlando Jones plays a geology professor and also becomes a part of this small `save the world` team. For apetisers to a main course movie look out for a quick but impressive logo animation for the `Monticito Picture Company` before the movie starts up.

The picture is in anamorphic 1.85:1 and stands tall on the quality of transfer, as the movie plot is about aliens its expected to see some space visuals and planets, all the deep space blacks are bold and are well contrasted against the edge of the planets shown, shadows are effective over the meteor and although some scenes are darker than others no detail is lost. You can`t even see any blemishes in the picture looking into the light beams of the helmet lights in close up shots during chapter 6 of the DVD. There is no `blockiness` in the backgrounds and no dropouts present either, the colours are crisp and clean no matter what part of the movie. The locations and sets are impressive enough to tie in with the theme of the movie, there is a lot of desert shots which show empty roads, dusty ground and mountain ranges blurred out in the distance by heathaze also some well shot caverns and `alienesque` plantations and creatures and government top secret chambers with lots of equipment around. There is some impressive CG work on the aliens and various creatures, one example of this is the flying alien which spawns another one from its mouth then takes flight into a shopping mall, there must have been a sale on! Feast your eyes also on the enormous alien blob which the team must destroy, very well presented especially on the long shots of it crushing everything in it`s path, its huge!

The Region 1 version of "Evolution" boasts the superior DTS 5.1 track as well as Dolby Digital 5.1 and Dolby Pro Logic 2.0. I will review the audio from the DTS track as this is the best it gets. Dialogue isn`t a problem and is clear even when the characters mumble under their breath and over the music mix, there is also some variety of clear audio effects and music. Frighteningly real sounding was the shotgun which was used in the mall to hunt the flying creature, the shots were very explosive and bassy and the reverb effect from the gun was impressive within the echoey mall, the thud of the creature once defeated was also a `subtester`. There was a lot of great rumbles and sub effects throughout but not overdone, the meteor scene demonstrates the first example while the small flying creatures inside the cavern tested out other speakers with directionality effects. The variation in the music was great at times cinematic scores were present like the scene when Ira and partner are travelling to get a glimpse of the meteor hit site, it is here where the cinematic score is and seems separated well away from the centre speaker and utilises the others around you. Sometimes the music would change it`s tone and move into a `westerny` theme or country type tune, during the firemans test scene there is a nice clear strumming on a guitar, in DTS the experience of the instruments makes you feel that they are right infront of you being played by someone, terrific! There was even some funky bits included in some scenes.

The Menu is presented from a 1st person perspective view, as you seem to glide through animated rock formations and over water. The picture flickers slightly to make it seem like you are viewing through a monitor or lens. The available options are laid out within a `box frame`, it is really the backdrop which is visually impressive with a nice piece of music score overlayed. There is an adequate amount of features including some of the basics which DVDs have; production notes, filmakers, cast bios and some of the good stuff; there is an audio commentary, 6 deleted scenes, storyboard selections with scene match and photo gallery which feature sketches and designs of the aliens. There are also 2 running features, a 15 min HBO documentary and a 10 min visual featurette which completes the list.

This has got to be one of the best sci-fi spoofs around, probably the best due to latest technology in visual and audio departments. I just couldn`t accept the fact that Duchovny was not Fox Mulder in this movie, the whole plot and theme is Mulder and his field of work and research therefore, except for his dresscode it seems like that character and not Ira. Its only due to the humour and the comical side of this movie which takes all the Mulder ingredient out! Duchovny himself pulls a `mooney` in one scene and shows all as proof to people like myself that this is a different plot. The quote from Ira during one scene, "No Government, I know those people" was an intended "X Files" pun I reckon put in by the film makers. A lighthearted sci-fi spoof that takes a comical approach to alien lifeforms, well worth a few laughs though.