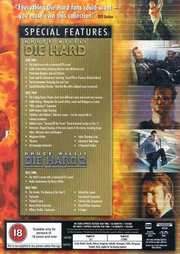 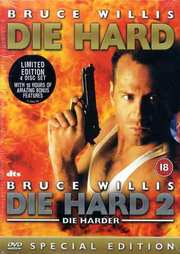 Synopsis:
Die Hard
On Christmas Eve, New York cop John McClane (Bruce Willis) is visiting his estranged wife Holly (Bonnie Bedelia) in Los Angeles, where she works. They are attending a party at Holly`s high-rise office block when terrorists, led by the suave Hans Gruber (Alan Rickman) break in, taking everyone hostage. McClane manages to evade capture, however, and sets out to rescue his wife and the other prisoners. It is not long before he is running barefoot over shattered glass (ouch!) in a sweaty vest, muttering `Yippy kay aye` as he dispatches the baddies with bullets and a certain earthy wit.
Die Hard 2
On a snowy Christmas Eve, in America`s capital city, a team of terrorists has seized a major international airport, and now holds thousands of holiday travellers hostage. The terrorists, a renegade band of crack military commandos led by a murderous rogue officer (William Sadler), have come to rescue a drug lord from justice.

They`ve prepared for every contingency, except one: John McClane, an off-duty cop seized by a feeling of deadly deja vu. Bruce Willis returns as the heroic cop who battles not only terrorists, but also an incompetent airport police chief (Dennis Franz). Great action sequel.

The original Die Hard spawned a genre, not least in its own sequels but in mutant offspring like Speed, The Rock, and even (whisper it) Operation Swordfish. A giant among shallow, low-brow action movies, with few artistic redeeming features, it`s also a must-have movie classic. If you`re going to own it on DVD, then this is the edition to have, although it is a disappointing wolf in sheeps clothing.

Top notch. The video transfer for Die Hard may have improved on the original region 2 release, but I thought that was pretty good regardless.

First class. The major advantage over the first region 2 release is the DTS soundtrack for both films. An unexpected bonus is the dialogue track to the sequel, irrationally toned-down for the original UK video release, or was I the only one irritated by Bruce clearly saying the word "f**k" but looped in unconvincing Hong Kong style with 15-certificate-friendly alternatives?

The big disappointment of this package, given a whole disk of extra capacity per film. Die Hard`s is especially weak, over in no time at all, the extra out-takes a weak 2nd or 3rd generation copy of a dismal blooper reel.

I`ve lost count of the number of times I`ve seen Die Hard, and I could sing its praises into the night. Despite the leave-your-brain-at-the-door plot and characters, it`s high-speed, lean and intelligent film-making. It`s the one DVD I`ve replaced with an upgrade in my collection. The sequel has had a lot of bad press, but I think it`s also worth sitting through again and again. If you don`t own them yet you won`t find a better edition than this, and it`s now long enough in the tooth to start appearing in the sales. Just keep in mind, it isn`t worth buying for the extras alone.
posted by SteveGough on 4/8/2002 19:49
10 / 10

DIE HARD 1 IS THE BEST ACTION FILM I HAVE EVER SEEN.

DIE HARD 2 IS THE SECOND BEST ACTION FILM I HAVE EVER SEEN.

THEY BOTH HAVE BRILLANT STORYLINES OF TERRORISM ACTS THAT BOTH GO ON FOR 2 HOURS.

BRILLANT PICTURES OF THE LETTERBOX WIDESCREEN ON BOTH.

YOU CAN GET DTS AND DOLBY 5.1. ON BOTH FILMS AND THEY ARE BRILLANT.

THE EXTRA FEATURES ARE TOP OF THE GAME WHICH MAKES THEM EXCELLENT VALUE.