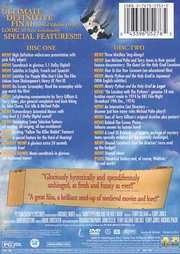 Back Cover of Monty Python and the Holy Grail: Special Edition
Related Items

DVD
Monty Python and the Holy Grail (US)

Article
The Statue out on DVD in June
Recently Added Items

Monty Python and the Holy Grail: Special Edition (US) 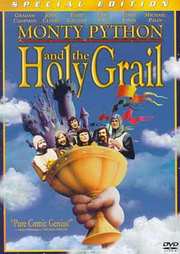 Synopsis:
Monty Python And The Holy Grail is a hilarious send-up of the Middle Ages as told through the story of King Arthur and framed by a modern-day murder investigation.

This two-disc special edition includes a widescreen presentation of the film along with commentaries by directors Terry Gilliam & Terry Jones, behind-the-scenes photos you`ve never seen before and much more!

Disc Two:
Three Mindless Sing-Alongs
Join Michael Palin and Terry Jones in their Special Documentary: The Quest For The Holy Grail Locations
How To Use Your Coconuts (An Educational Film)
Monty Python And The Holy Grail In Lego!
"On Location with The Pythons" (18 min.)
An Interactive Cast Directory
Tons of Terry Gilliam`s Original Sketches Plus Posters
Behind-The-Scenes Photos
A Load Of Rubbish - A Surprise Package of Mystery Items Specially Included for the Mentally Challenged.
Unused Locations! How The Directors` Recce Used Up The Budget!
Theatrical Trailers
Weblinks

I realize I`m dealing with cult here, but even cult must rely on something meaningful.
Does this movie mean anything? No. Is it funny? Occasionally, almost. Does it make sense? No. Should`ve it become a cult? Probably not, but the fact remains that it did.
The video transfer is good, considering the age of the source material. There are no compression signs but quite a few scratches and dust particles are present. The colors are slightly de-saturated and the image is not very clear at times.
The DD 5.1 soundtrack is flat. The surrounds are used occasionally, but they do not contribute too much.
The menus are animated with sound (in DD 5.1).
The extras include 2 commentaries, numerous behind the scenes looks (locations and documentary), 2 scenes with Japanese dubbing and a picture gallery. For a 2-disk set, the extras are not very impressive.
Bottom line - if you`re a fan of this rubbish then this 2-disk set is definitely for you. If, however, you are not into 100% nonsense, give it a miss. Just say NI.
posted by Zvi Josef on 29/12/2001 10:08
8 / 10

It`s pointless trying to explain the appeal of the Python team- either you like their stuff or you don`t. What I will say however is that their movies are remarkably interesting and fresh even though they`re decades old and Holy Grail`s quirky humour is still as appealing as ever. So if you don`t like this, you shouldn`t bother with their other stuff either and looking at their body of work, only Life of Brian is of equal value (many prefer that movie in fairness, but it`s a close call). In any case, Holy Grail doesn`t have the most coherent story you`ll ever see, but the overall spirit and comic performances certainly make for a memorable viewing experience.

It`s slightly episodic in truth and it`s frequently criticised for being merely a parade of sketches that have been thrown together. I think that`s grossly unfair though and the directors (Gilliam especially) have managed to make the movie hang together rather well and the ever-changing nature of proceedings is one of the major plus-points IMO. The best way to describe it is to say it`s unpredictable and slyly subversive (so don`t just dismiss it as stupid). It has lots of well-observed dialogue concerning the ridiculousness of legends/traditions etc, but there`s a fair amount of throwaway silliness too. It`s a risky mixture of elements, but thankfully it all works extremely well.

This new S:E release does have some worthwhile extras aswell, including a recently filmed docu-piece on the Grail-locations and a BBC special from the 70`s. The commentaries feature all the surviving Pythons edited into 2 separate tracks. There`s no actual interaction between the contributors on these tracks, but they ARE scene-specific (and worth a listen). The menus are a lot of fun and accurately re-create the style of Python animated shorts. The new 5.1 mix does a decent job of livening-up the orchestral theme and the new anamorphic image is much better than the one on the existing bare-bones disc.

There are rumours of subtitle glitches which affect certain players (i.e subtitles switching on without being requested), but this will probably have been rectified on newer copies and most players are unaffected anyway. You should look into the subtitle issue if you have a Toshiba machine though because they`re one of the higher-profile companies that have been linked with the problem (buyer beware!).

this special edition is what i and other fans of monty python have been waiting for,the film still makes me laugh out loud columbia have done a bang up job with the extras.Follow the
killer rabbit extra is just the same as the matrix and the script
extra is also interessting.The sound is perfect and the picture
is crystal clear well done columbia!!!!!!!!!
posted by verhoeven on 4/3/2002 19:30
9 / 10

I bought this dvd purely on recommendation. It had me in tears of laughter when I watched it. I cant remember seeing anything so hilarious as this movie. King Arthur and his nights of the round table go on a quest to find the holy grail with hilarious results.
The picture quality is quite grainy at times and not as sharp as it should be, but that can be forgiven since the movie is more than 25 years old. It still doesnt get in the way of your enjoyment of the movie. Sound is a "very loud" DD 5.1 and is quite good. There are plenty of extras packed into this 2 disc set. It parodies the matrix with its follow the killer rabbit feature and there is a subtitle track for people who dont like the film. Tons more extras.

An absolute classic, this is the ultimate, definitive, final special edition dvd that is a must own for everyone. There is also an identical region 2 version
posted by dicanio on 18/1/2003 17:40
7 / 10

One of the funniest movies ever,this film is a non-stop barrage of jokes and gags.Even the credits are hilarious.

Presented in 1.85:1 anamorphic widescreem,the movie looks pretty mediocre.Film Grain is very noticable,and a number of defects are noticable.Some scenes look good, others are not so good.

The audio is fairly o.k., with a new Dolby Digital 5.1 track.

The extras begin with two fun commentary tracks: one featuring Terry Jones & Terry Gilliam,and the other features Eric Idle,Michael Palin,and John Cleese.You can watch the accountants version which tells you how much everything costs.You can read the screenplay while watching,and there shakespeare subtitles.There are also 24 added seconds to the movie.

The 2nd disc features a 45 minute documentary which deals with the locations used.There is a hilarious educational short on coconuts,a Japanese version of the movie,a 1974 documentary,a hilarious segment that features the movie in Lego,and lots of other stuff.

Please Note that I am reviewing the R2 UK edition, which is exactly the same, but with the advantage of a PAL picture.

MOVIE
Having seen all of the Python movies, I can say without a shadow of a doubt that this one is my favourite, I like Life of Brian, it`s juts I prefer the more madcap and even more amatuer and low budget approach that this film takes, even if the ending is a copout when compared to Life of Brian. The movie is just full of wondeful visual jokes as well as the usual cracking dialogue. The acting is also very good, even if it was just some blokes having a laugh with a little bit more money. If you haven`t seen this film, then it`s one I do insist you view, as most find they enjoy it. I do.

AUDIO
The original mono track has been somehow turned into a 5.1 surround and it does sound quite good actually. Although it is hardly going to break supporting walls with its bass or anything, it does the job. It didin`t really need a 5.1 track, so it is just a bonus really.

EXTRAS
Ahhh, thank you Columbia Tristar, you are kings amongst DVD Producers. This is a wondeful set. The list on the back of the box sets out out good it is going to be, and there is just to much to mention, but I will try:
The Commentaries- I have only listened to the Two Terrys track, and it is so funny, and a very engaging listen. The one fact that springs to mind is that all the chain mail is made from wool! But there are so many more anecdotes. The other one features some of the cast, but they were all recorded separately, so doesn`t really have the same spirit, but it is well edited
Featurettes- There are a couple of featurettes on the disc, one being the on set report for the BBC, which features some nice interviews, but the besty one is an hour long retrospective with Terry Jones and Michael Palin where they revisit the locations they used.
Follow the Killer White Rabbit-A little interactive feature that takes you to Gilliams drawings and budget notes during the film.
The rest of the second disc is full of little oditities which you should explore yourself, but do check out the Lego Knights and The Government Coconuts Report.
There is still much more, like the extra 24 seconds of film, the little film at the start, the great menus, the trailers and more. Without the disc going over the top, this is superb treatment of a true cult classic.
posted by cartoonjonah on 5/6/2003 17:20