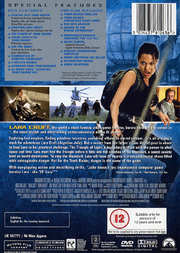 DVD
Into the West (UK) 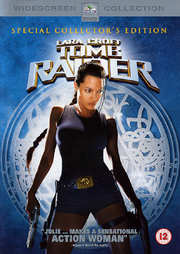 Synopsis:
Lara Croft, the world`s most famous video-game heroine, burst onto the big screen in "…the most stylish and entertaining action-adventure movie in years!"

Exploring lost empires, finding priceless treasures, punishing villains in mortal combat.. It`s all in a day`s work for adventurer Lara Croft (Angelina Jolie). But a secret from her father`s (Jon Voight) past is about to lead Lara to her greatest challenge: the Triangle Of Light, a legendary artifact with the power to alter space and time. Lara must find the Triangle before it falls into the clutches of the Illuminati, a secret society bent on world domination. To stop the Illuminati, Lara will have to survive a cross-continental chase filled with unimaginable danger. But for the Tomb Raider, danger is the name of the game.

Angelina Jolie stars as the eponymous heroine, the Tomb Raider of the title. Lara is a wealthy adventurer who loves nothing more than exploring ancient ruins in search of priceless treasures, kicking a bit of arse as and when needs be.

When Ms. Croft discovers a mysterious relic in a secret room in her mansion it leads her on a quest for the artefact known as The Triangle of Light, a fantastic treasure with the power to alter space and time. Lara has to work against the clock in order to reach the Triangle before a secret society known as The Illuminati do, lest it be used for their sinister agenda.

Along the way Lara must travel many miles and face many dangers, using the resources at her disposal to find the Triangle before The Illuminate (headed by the nefarious Manfred Powell) get their hands on it.

So now you know the basic story, what is the film really like? Well for starters it doesn't break the curse of video game/movie crossovers. Tomb Raider is a flawed piece of work and no doubt about it. The biggest problem is the pacing; there is just no time for character development. The whole thing is an excuse for the, admittedly good, action sequences, with the bits in between merely acting as padding. Even these sequences tend to drag on far too long, and most have been done countless times before (usually better).

You never actually get the impression that the world is in any real danger. This is not so much because Lara Croft is on the case, but because the bad guys are buffoons with little or no characterisation. Angelina Jolie does put in a reasonable performance, and she definitely looks the part, but something is still lacking. Her padded bra also looks a bit obvious. Iain Glen, who plays Manfred Powell, looks far too young for his role, and the guy who plays Lara's sometime love interest is about as charismatic as a brush. Noah Taylor is ok as the geeky scientist who designs all of Lara's gadgets, and Chris Barrie (of Red Dwarf fame) is passable as her butler. The problem with Barrie, and this is more of a problem with me actually, is that he is too recognisable as 'Rimmer' from Red Dwarf. I kept looking for the "goalposts" on his head… Perhaps the best performance comes from Jon Voight, who plays Lara's deceased father in a number of flashback sequences.

As a relatively new film you would expect Tomb Raider to have a flawless, razor sharp transfer, would you not? Well you'd be in for a slight disappointment. There is some noticeable grain in the image, which detracts from the overall score. Colours are often muted, although I suspect that this is no fault of the transfer. The various locations all look nice, as do the action segments, and there are some fair special effects on offer. All in all this is a slightly above average transfer.

This comes in the form of Dolby Digital 5.1 and Dolby Surround tracks. On the whole I was very disappointed with the mix, which is far below the standards I would expect for a major new release. Dialogue is often muted, especially during the action scenes, and the music suffers the same fate. The sound effects drown out the score to the extent that it's almost like you're listening underwater at times…There also seems to be far too much bass in the mix, which only serves to exacerbate the above problems.

At first glance the disc looks to have a fair selection of additional content. I say at first glance because, as is becoming increasingly common, the extras are of little worth. Included are your standard backslapping documentaries on the making of the film, entitled 'Digging into Tomb raider', 'Crafting Lara Croft', 'The Stunts of Tomb Raider and 'Visual Effects of Tomb Raider'. None are particularly exciting. There is also a documentary exploring the computerised origins of Lara entitled 'Are You game?' which is worth at least one viewing.

Also included in the package are four deleted scenes of little interest, an alternate main title sequence, a U2 music video and some DVD-ROM features. The last extra is the commentary track by director Simon West. It should have been ninety minutes of apologies to be honest (which reminds me of an episode of the Simpsons and a certain Kevin Costner film, but I digress…). West does sound enthusiastic about the film, so it is at least entertaining, almost more so than the film actually. On the down side he does sound like he's reading from a script at times…

Sadly this is yet another in a long line of video game to movie flops. The pacing is off, there is zero character development and the "story" is just an excuse for one set piece after another. Angelina is ok as Lara, and there's no arguing that she's wonderful eye-candy, but even the divine miss Jolie can't rescue this mess. This is definitely one for the die-hard gaming fans and twenty nine year old virgins out there. Best avoided.
posted by Chris Gould on 21/12/2002 02:04
6 / 10

Introduction
Lets see... its a film of the computer game. Computer games are great fun, but they are interactive and test your skill. Whilst they often have stories to them, the storyline is there to set the game in context, not as a reason unto itself. Anyway, I didn`t really get hooked on the computer game, and I didn`t go to see the film when it came out, fearing the worst. Well, someone gave me a copy of the DVD so I thought it only polite to watch it. My expectations were pretty low though.

The Plot
Much in the general mold of Indiana Jones/5th Element/etc. A priceless artifact that allows the owner lots of power must be recovered by following ancient clues. OK - we may now have the silicon chip, be able to see back to the start of creation, and cure many ills. But you have to hand it too these ancients. Having mastered the secrets of chipping flint and smelting bronze, they also happened to knock up the odd time controller and worked out how to animate stone in their spare time.
On the way to recovering the clues, we get to visit lots of out of the way places, and of course fight it out with the bad guys. Naturally when voyaging to foreign climbs you will need to pack the minimum of clothes, and short shorts are suitable for all climates.

Is it me or is some of the plot just a little beyond belief? I know its a tightrope to walk between action and believability. Indiana Jones managed to keep on the right side of it, but I`m not sure if this always does. Having said that, I`m sure they could have come up with far far worse with a little less effort!

Angelina Jolie as the heroine does a pretty good job. The rest of the cast I felt didn`t get time to develop, so I was still trying to work out the characters personalities as the film finished.

The Visuals/Audio
Nothing too special really. A 5.1 mix of sound, used ok but nothing memorable. Visual I thought were ok, but I don`t have much of an eye for these.

The Extras
Quite a number of extras - the usual sort of stuff. Some deleted items. Some back patting stuff, and some stuff about the special effects.

Summary
Well, given my low expectations, I actually enjoyed the film. Its probably not going to feature in my top 10 best ever movies, but I think it was a lot better than I thought it would be. It could have been a lot worse.
posted by Julian Onions on 13/9/2004 18:29