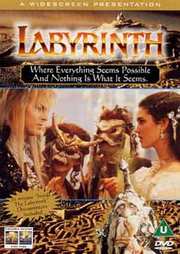 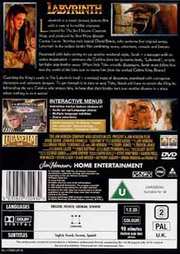 Back Cover of Labyrinth
Related Items

DVD
Invitation to a Gunfighter (UK)

Jim Henson was a genius. The emotion and feeling he brought to his characters is unrivalled. Many have grown up with his creations, whether it was Sesame Street, the Muppets or even Fraggle Rock, he literally entertained millions. It has to be said that his films were far eclipsed by his television work. Whilst Henson`s work can be seen in many blockbusters, most notably the Star Wars Movies, his own films aren`t nearly as memorable. There have been a slew of Muppet Movies, The Great Muppet Caper, Muppet Treasure Island and Muppets in Space among others. I can only recall two films that he made, with new characters not developed in television first. The first was The Dark Crystal, a critically acclaimed film that didn`t enjoy major box-office success. The second is of course, Labyrinth, made in 1986.

Labyrinth is a contemporary fairy tale. A teenaged girl Sarah is obsessed with a play, The Labyrinth, and uses this to escape her life. She feels persecuted by her stepmother and jealous of her baby brother, Toby, and due to her fascination with fairy tales, she assigns fairy tale stereotypes to her situation. One stormy night, she is left to baby-sit while her parents are out. Toby naturally frightened of the storm cries incessantly and the exasperated Sarah, unable to calm him, calls desperately for the goblins to take the child away. The goblins, ever aware grant her wish. When she realises that Toby is gone, the Goblin King, Jareth, confronts her. She wants desperately to get Toby back, so the Goblin King challenges her to solve the Labyrinth in 13 hours, or else the child will become a goblin forever. Hence starts a wonderful and magical quest through the labyrinth for Sarah. She encounters all sorts of magical creatures and makes friends to help her in her journey.

I am pleased to report that the DVD has a flawless 2.35:1 anamorphic transfer. All through the film colours are vibrant and the image is well defined. Unfortunately, the same cannot be said of the original film stock. This film is 15 years old and it shows. The occasional scratch and blemish is apparent, but isn`t distracting. A more mainstream title would have been remastered, but I guess this title wouldn`t warrant such attention. The film design itself is glorious. The Labyrinth is full of tricks of perspective based on optical illusions. The sets are expansive and colourful, adding greatly to the magic of the story. One grumble is the Fireys scene. Sarah comes across a group of Fireys who launch into a song and dance number. The dance involves ripping off bits of their anatomy and throwing them around. The documentary goes into detail about how this intricate scene was achieved using careful choreography and an optical matte process. It`s a shame that the effect doesn`t come off and the scene is very two dimensional, and the elements are obviously separate. It is a jarring scene that breaks your belief in the film and puts you back at square one. You do wish that digital technology existed back then for this scene alone. That is my only gripe about the visuals.

The sound is presented in a DD 2.0 surround format. You may have hoped for the full works on this title, but I was pleasantly surprised by the quality of the sound. You still feel immersed in the film and it is obvious that they made the most of the format. David Bowie provides the soundtrack and he doesn`t disappoint. As this is a film firmly set in the eighties, this may not be to everyone`s liking, but I like eighties music, so Nyaaahh! Excuse me. I love the title tune, Underground and of course the Dance Magic number. Every time I see the flatulent Bog of Eternal Stench, I can`t help but smile.

This disc is very good for extras, it has a trailer of the movie as is normal nowadays, but it also has a 56-minute documentary behind the scenes of the film made at the time. Discussing all aspects of the making, from the soundtrack, the choreography, and the puppet manufacture to the design of the movie. It is comprehensive and informative. Look out for some famous faces too. I spotted Chaka Khan and Cheryl McFadden who is the Director of Choreography and Puppet Movement looks remarkably like Doctor Crusher from Star Trek The Next Generation.

The film has a charming script, written by Terry Jones of Monty Python fame, with wit, humour and a slight irreverence. A young Jennifer Connelly appears as the teenager Sarah and shines in the role. David Bowie plays the Goblin King. Now many if you may question the wisdom of Rock Stars in the movies. But if you consider Bowie`s many personas in his career, you realise that no one else could possibly have played this role. Bowie brings a humour to the role that is completely believable. He also contributes heavily to the soundtrack, which is definitely a good thing. Thus ends the cast, the human cast anyway. Now bring on the wildest cast of puppets to ever grace a movie screen. There are goblins galore of every persuasion. Talking doorknockers, a somnolent Wiseman, with a Spanish Hat (The hat speaks Spanish), and a group of limb tossing, head launching fireys. Sarah`s friends include a vast behemoth called Ludo, who has a power over the very rocks themselves. A gnarled dwarf with a heart of gold, Hoggle and my own personal favourites the knight errant Sir Didymus and his trusty steed, the sheepdog Ambrosius. The intricacies in these characters are great, especially the complex Hoggle who needed 5 operators to work his expressions alone. It is a film like this that makes evident the drawbacks of CGI. In CGI, actors usually have to emote to a tennis ball and physical interaction is difficult at best. Watching Bowie and Connelly interacting with characters they obviously believe in is some how more credible and honest. When Sarah gives Hoggle a kiss and Hoggle reacts in disgust, it is instantly real for the viewer. There are many wonderful situations that heroine finds herself in. From the initial entrance into the Labyrinth, the wall of helping hands, the Bog of Eternal Stench, the big fight outside the castle, the dream sequence in the ballroom, and the climax in the M.S. Escher derived castle, the viewer can`t help but be hooked.

In summing up, this film is a fairy tale for all ages. The young will be entertained, whilst the humour appeals to adults also. It is primarily a children`s film though, so bear that in mind if you`re no longer a child at heart. (Who`ll admit to that though?) It does have its flaws, the story doesn`t tax the grey matter, and the film has dated somewhat. But this still leaves it a flawed gem. Watch this for 98 minutes of sheer magic and escapism.