Review of Final Fantasy: The Spirits Within
added by
Chris Cox
Places to Buy 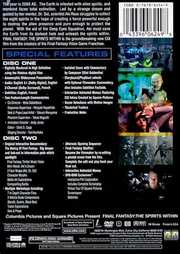 Back Cover of Final Fantasy: The Spirits Within
Related Items

Final Fantasy: The Spirits Within (US) 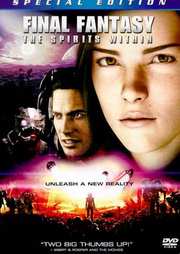 Synopsis:
The year is 2065 AD. The Earth is infested with alien spirits, and mankind faces total extinction. Led by a strange dream and guided by her mentor, Dr. Sid, scientist Aki Ross struggles to collect the eight spirits in the hope of creating a force powerful enough to destroy the alien presence and pure enough to protect the planet. With the aid of the Deep Eyes Squadron, Aki must save the Earth from its darkest hate and unleash the spirits within. Final Fantasy: The Spirits Within is the groundbreaking new CGI film from the creators of the Final Fantasy Video Game Franchise with voices from: Alec Baldwin, Steve Buscemi, Ming-Na, Ving Rhames, Donald Sutherland and James Woods.

I`ve been waiting for this movie ever since I saw its trailer about a year ago. Being a CG animation fan I was literally blown away when I saw the movie lying on the shelf in the DVD library about a week prior to its official release date.
I guess I ought to start with the story. Well, the story is the ONLY weakness of this movie. The movie describes a search for 8 spirits, who are the only ones who can help planet Earth from being completely concurred by an alien life form. However, there is hardly ANY background information in the movie and the viewer is not given enough data, but is rather thrown into the action. And boy, talk about action!
The video transfer is incredible. The picture is sharp, flawless and the colors are well saturated throughout. Being a digital movie, there are obviously no scratches and dust particles and no compression signs can be seen (even under close inspection). If anything makes this movie it`s its visuals. They are, in a word - stunning. While several characters have a semi-"plastic" look, most of the characters look amazingly real and the level of details is beyond belief. The 2D backgrounds are amazing and they are seamlessly blended into the 3D CG. The facial movements and expressions of the characters are very accurate.
The Columbia-TriStar new logo animation is awesome.
The DD 5.1 soundtrack is excellent. The surrounds are constantly used and the sub is given a tremendous workout. The channel separation is remarkable and contributes a lot to the action scenes.
The menus are beautifully animated with sound.
The extras include: Disk 1 - 2 commentaries, one in Japanese by the co-director and some of the crew (totally redundant - do that many people in region 1 speak Japanese?!?) and the other in English (thankfully) by the animation director and some crew members. The disk also includes an isolated score (not that great) and an awesome storyboard section.
Disk 2 - a 30 minutes behind the scenes featurette (which lets you interact with it), 7 character files and vehicle models, a section that allows you to compose a scene from several segments, an alternate opening scene (I liked the original better), some very funny CG outtakes and a very rich set of DVD-ROM features.
Be sure NOT to miss about half a dozen easter eggs on the 2 disks (the "Thriller" clip is awesome!!!).
This is exactly what you`d expect extras for a movie of this kind to be - excellent.
Bottom line - don`t mind the rather weak story. This is a visual extravaganza which should impress anyone with a 6/6 eye sight.

Nearly 3 years after watching the movie for the first time, I sat down and watched it again.
While the plot still remained not too strong an element, the movie is still enjoyable.
The visuals still look impressive, even though it`s been a while since they were regarded as ground-breaking.
The audio track is quite explosive with nice separation of the channels.
And to top it all, the 2 disc-set includes plenty of extras, including quite a few gags.
I have to conclude and say that despite the sort of weak plot, this is a remarkable movie and must get credit for that.
posted by Zvi Josef on 27/10/2001 20:22
9 / 10

well this is a real good film the picture is the best you might find at this time due to there being no film to digital transfer the only thing i find wrong with it is the sound not as loud or booming as than at the movies (or i should turn my amp up more) still very good i like the features all on one disk. (i like the way you can make you own scene from a few clips real nice touch) i was told it is not RCE by a few people but it is i tried it in my brothers region 2 only dvd player at up comes the map

Not bad for an cgi based film. Although the storyline rather resembles Titan A.E in a way. Much better than the video games by far and when watching you can sometimes forget you are watching computer visuals.
This film should have done better at the box-office but was put down. As a DVD it does well with a 2 disc set and new never thought of features such as redoing particular scenes.
Trust me in 4 years the sequel will come.
posted by D.stent on 29/10/2001 15:38
10 / 10

i had played the games before and when i heard a film was
coming out i thought it would be brilliant,but when i saw it i
thought this has nothing to do with the games,but it was much
better as for the extras their are plenty to keep you occupied
especial the editing work shop.
posted by verhoeven on 16/11/2001 20:09
7 / 10

Final Fantasy has an interesting, innovative storyline. In the relatively near future, 2065 AD to be precise, aliens known as Phantoms have infested the Earth. These aliens, spirits from a long dead world, are invisible to the naked eye and have the disturbing ability to kill any living thing they come into contact with. Mankind is on the brink of extinction, huddled together in huge barrier cities, the last remaining human cities.

All is not lost however. A young Dr. named Aki Ross is searching the globe for the 'seven spirits'. These spirits take the form of living creatures, be they plants or animals, and when combined will cleanse the planet of the Phantoms once and for all. Aki is not alone in her quest; she is aided by a group of soldiers called the 'Deep Eyes', led by Aki's former love Gray Edwards, and watched over by her mentor, Dr. Sid. Together they fight the Phantom menace (no pun intended), and a vengeful General named Hein, who is intent on an all-out military solution to the crisis. Unfortunately Hein's plan to use an orbital space cannon to strike back at the Phantoms could have serious repercussions for the Earth…

It's been a while since the film was released theatrically, and I still have a hard time believing it performed so poorly at the box office. In a year that gave us so many turkeys, it also surprised me to hear Final Fantasy described as "rubbish". While it may not be the most exciting film ever produced, you have to give it marks for trying something new. The storyline is far more involving than your average Hollywood flick, and the breathtaking visuals really do set a new standard in this type of computer generated animation.

There are times you will forget that you are watching animation, so fluid and convincing is the motion of the characters. The level of detail is also far beyond anything seen before, with the imperfections in the characters skin apparent in close-up shots being a prime example. Voice acting is also excellent, especially from Ming Na (Aki), James Woods (Hein) and Donald Sutherland (Dr. Sid). There are a couple of instances of dodgy lip-synching, but his doesn't ruin the overall experience.

The video is virtually flawless, as you would expect from a completely digital film. I say virtually because although Final Fantasy does look stunning, it's not entirely perfect. The 1.85:1 anamorphic video (average bit rate 5.21Mb/sec) is a little dark at times, which hides a lot of the fantastic visuals. The other problem relates to grain, of which there is a fairly significant amount. Now I don't know if it was added artificially to give the picture a 'film-like' quality, but I find it annoying and it has cost the transfer a point. Even so, with the exception of a few films, the image is still better than anything I have seen before.

Sound is provided courtesy of Dolby Digital, in 5.1 and Dolby Surround mixes. The 5.1 track is great; there's always something going on, with excellent use of the split surrounds. The LFE channel delivers large amounts of deep, growling bass and, as is to be expected, dialogue is always very clear. Sound effects are spot on for this type of film, and the score suits the on-screen entertainment very well. Overall this is a fantastic track.

The first commentary track is in Japanese, subtitled in English. This contains a lot of useful and interesting information on the film, which tends to be on the technical side. The second track is even better, although I could be biased as an English speaker. The guys give a lot of useful info, which appears to be more anecdotal than the Japanese commentary.

Also included on this disc is an isolated musical score with commentary by composer Elliot Goldenthal. The film has an excellent score so this is a welcome inclusion.

The boards/blasts option plays a series of sequences from the film in various stages of completion, such as storyboards and primitive renderings. This also comes with the option of a filmmaker's commentary and subtitled factoids, which contain such fascinating information as how many babies were born to the staff of Square during the production (31 if you're interested, and also 26 marriages).

The disc also contains a number of teaser and theatrical trailers, not only for Final Fantasy, but also for Men In Black, Starship Troopers and Metropolis. A sneak preview of Final Fantasy X is also included.

Disc two is where the majority of special features can be found, the most revealing of which is the documentary. This is of the interactive kind, almost like the white rabbit feature in the Matrix. The documentary links to some of the other features on the disc, which include: Aki's Dream, a mini-movie which stitches together Aki's dream sequences for your viewing pleasure,

One of the most novel inclusions is the Final Fantasy Shuffler, which basically allows you to re-order a key scene from the movie the way you like. This isn't as cool as it first sounds as the scene only really makes sense the way it is in the film. Still, it gets points for originality.

Both discs include CGI intros created especially for the DVD and they look great. The menus themselves are very nicely animated, certainly better than the vast majority of discs.

Final Fantasy will not appeal to everyone, of this there is no doubt, but if you are a fan of computer animation this will blow your mind. While I admit the story is a little slow in places, it certainly isn't dull. The excellent voice acting, coupled with the stunning visuals and great audio, make for a fantastic ride. This two-disc edition includes enough extra content to keep even the most demanding of fans happy, and as such the package comes recommended.
posted by Chris Gould on 21/12/2002 01:28