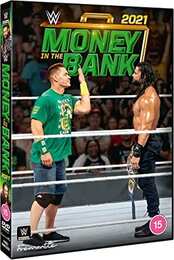 Synopsis:
Winning the Money in the Back briefcase guarantees its holder a WWE Championship opportunity anytime they want.

Who will stake their claim to the richest prize in sports entertainment when ASUKA, NIKKI A.S.H., ALEXA BLISS, TAMINA, NATALYA, NAOMI, LIV MORGAN and ZELINA VEGA collide in the Women’s Money in the Bank Ladder Match?

In a dream match the WWE Universe has been waiting for, ROMAN REIGNS defends his UNIVERSAL CHAMPIONSHIP against EDGE.

Number one contender KOFI KINGSTON gets his opportunity at the WWE CHAMPIONSHIP when he faces “THE ALL MIGHTY” BOBBY LASHLEY.

Who will be declared Mr. Money in the Bank when KEVIN OWENS, RICOCHET, JOHN MORRISON, BIG E, RIDDLE, SETH ROLLINS, KING NAKAMURA and DREW McINTYRE try to climb the ladder of success?

THE SUMMER OF CENA begins as JOHN CENA makes his triumphant return to confront ROMAN REIGNS.

YOU CAN’T SPEND IT IF YOU DON’T EARN IT AT MONEY IN THE BANK!

Special Features:
Women's Money in the Bank Ladder Match
Alexa Bliss vs. Naomi vs. Asuka vs. Nikki A.S.H. vs. Liv Morgan vs. Zelina Vega vs. Natalya vs. Tamina

Men's Money in the Bank Ladder Match
Kevin Owens vs. Riddle vs. King Nakamura vs. Ricochet vs. John Morrison vs. Big E vs. Seth Rollins vs. Drew McIntyre