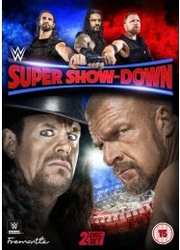 WWE have been doing a lot of travelling this year with two events in Saudi Arabia and now this one in Australia. Hopefully, this means that they will be coming across to the UK at some point which would be great to see. This event features Ten matches of the most popular WWE Superstars and in a way this makes the whole event feel special. Often when they do international events it feels like just a House Show or an episode of Raw or Smackdown, but these matches felt like they meant something, which was great.

WWE Smackdown Tag Team Championship between The New Day and The Bar was a great way to start the show and I although they have had better matches I still enjoyed everything about this match and the two teams work really well together.

WWE Smackdown Women's Championship Becky Lynch against Charlotte Flair was a great match to cement Becky Lynch’s Heel turn and she has almost become the best Heel the WWE has. The match was great and the two have always had great matches, but this added story element really helps it mean more and that ending was perfect.

John Cena and Bobby Lashley against Elias and Kevin Owens was a little bit of a waste if I’m honest. It felt like an old-skool squash match and you knew that Cena was not losing. His new finisher is ridiculous and I do hope that this does not become something he does all the time. The match itself was fine, just not great.

It was evident by the fourth match that they were stacking the card with tag matches to feature as many people as possible, but this tag match between Asuka and Naomi against The Ilconics (Peyton Royce and Billie Kay) was clearly only on here because of the fact that Royce and Kay are from Australia. The match was not great, lasting a little over five minutes and really only highlighted how badly the WWE are booking Asuka on the main roster after her dominating in NXT.

Thankfully, AJ Styles against Samoa Joe for the WWE Championship in a No DQ/No Countout match is (pun intended) phenomenal. I always knew these guys were great together, but this was the match that really showed just how great they worked together in the ring. This was just as good as their matches from Summerslam and Hell in a Cell and I could never get tired of watching them wrestle.

Another multi-person match saw Ronda Rousey team with The Bella Twins against The Riott Squad in a match that was not given enough time to really mean anything. The ending was great, but considering where they went with Nikki Bella it is surprising they did not sow the seeds for that here. It was fine for what it was, but nothing special.

However, Match of the Night was the incredible Cruiserweight Championship match between Cedric Alexander and Buddy Murphy. Now, with Murphy being from Australia I expected him to win and it was obvious that he would, but this match was still unpredictable all the way through. There are no gimmicks, no stipulations, simply two guys who are so smooth and fluid in the ring. Everything meant something and even though the match wasn’t long at a little over ten minutes it was amazing and captured me for every second.

Again, a multi-man match between The Shield against Braun Strowman, Dolph Ziggler and Drew Mcintyre. This was a pretty good match that could have easily have been the main event and a bit surprising and a shame that it wasn’t. All six had some great moments and it was great to see The Shield reform although such a shame that it was again so short lived.

After this match I have to say we had the most pointless match to ever feature Daniel Bryan. His literally three minutes long match against The Miz was such a let-down that I don’t even know why they bothered? After months of The Miz winning matches with Heel tactics I thought this match would be the final match to show just how great Daniel Bryan is and how great these two were together. It wasn’t. I would say easily skipped, but you might not even recall seeing the match at all. Waste of time?!?

Finally, we have the rather underwhelming No DQ Match between The Undertaker vs. Triple H. This was billed as ‘Last Time Ever’ but as the show ended, even I knew that would never be the case. The match itself was not awful, but did not feel big enough to warrant a main event spot. Throughout, each move just felt like Triple H and Undertaker playing their greatest hits move-set. The appearance of Shawn Michaels and Mayor Kane was good (No seriously Glen Jacobs who plays Kane was elected to Mayor of Knox County the month before the event??) and obviously set up the next match, but I still feel if they had ended with the Shield it would have been a much more satisfying end to the show.

I did expect some features about the significance of the show, but that was not to be. Instead included are five extra segments from RAW to hype up the Triple H and Undertaker match. I can understand this as apart from the feud between AJ Styles and Samoa Joe the rest of the matches did not warrant any hype, but this still would have been nice to have included a variety of things.

WWE Super Show-Down was a good show. There were only a few moments that made me groan and these are brushed over and could almost be excused for how good most of the matches are. Even if you only watch the Styles/Joe and Alexander/Murphy matches it would be worth it. I do hope this is going to be an ongoing trend of international Super Shows and hopefully we can get one soon.