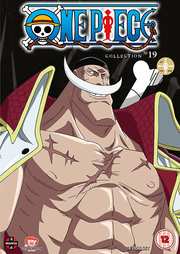 Review for One Piece Collection 19

Most everyone wears flip-flops on One Piece. It’s understandable given the nautical setting. You don’t mind getting your feet wet as much when your footwear will dry easily. But as footwear, flip-flops aren’t the most resilient of items, and given how much action and fighting the characters see, as well as all the running, how they stay on their feet is beyond me. This is one of those philosophical issues that will bug me for years to come. I just know it... 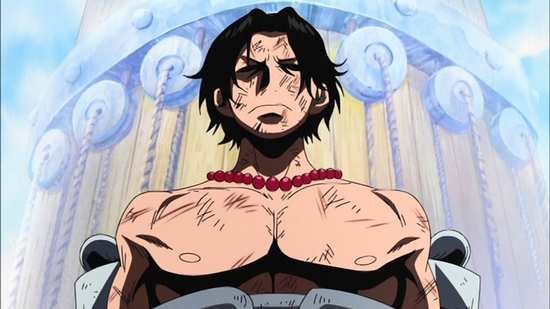 Monkey D. Luffy wants to be a pirate. No he wants to be the best pirate of them all, sail the Grand Line, find the legendary One Piece treasure left behind by Gold Roger, and become the Pirate King. He’s inspired in this by his mentor, Red-Haired Shanks, who saved his life when he was a child. He also ate the Gum-Gum fruit, a devil fruit which has given him stretchy rubber limbed abilities, although at the cost of his ability to swim. You’d think this would be a fatal handicap in a pirate, but Luffy has set sail nevertheless, looking to gather the best crew on the high seas, and venture forth onto the Grand Line. The first candidates for his crew include the mighty pirate-hunter swordsman, Roronoa Zoro, the skilled, pirate-hating thief Nami, the world’s greatest liar, Usopp, and the toughest chef around, Sanji. He’s later joined by the world’s first and only blue-nosed reindeer doctor, in the form of the fatally cute Tony Tony Chopper, the enigmatic and multi tasking Nico Robin, the cola-fuelled cyborg shipwright Franky, as well as the perverted skeletal troubadour Brook. 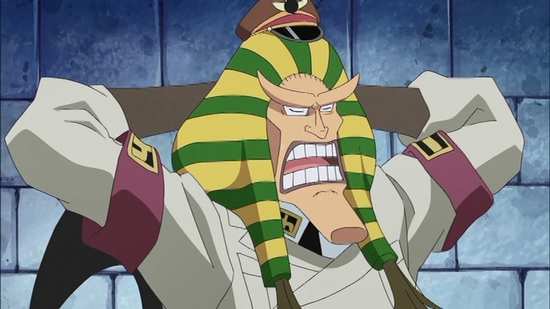 Previously on One Piece, Luffy entered Impel Down in order to rescue his brother Ace, and against all the odds, he made it to the lowest levels of the world’s harshest prison, before learning that Ace had already been moved to his execution site. As this collection begins, Luffy’s on his way back to the surface, climbing the levels of Impel Down, but hot on his tail is the poisonous warden Magellan. On the bright side, he’s made more than a few friends on his journey through the prison. 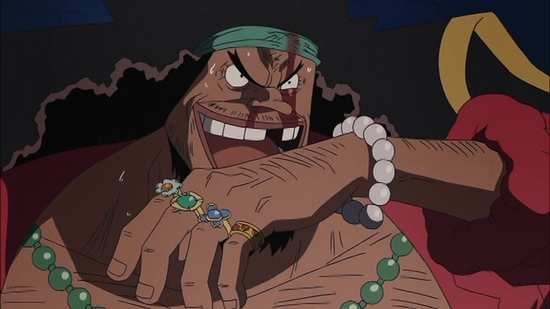 23 episodes of One Piece are presented across 4 DVD discs from Manga Entertainment. 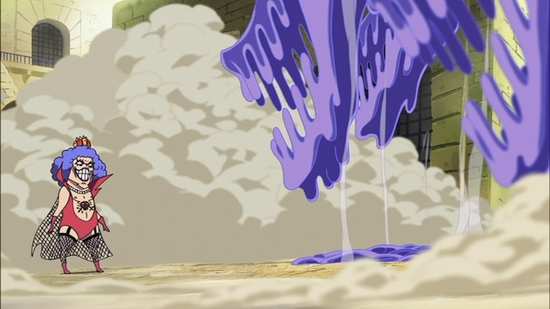 Disc 3
457. A Special Retrospective Before Marineford! The Vow of the Brotherhood
458. A Special Retrospective Before Marineford! The Three Navy Admirals Come Together!
459. Ticking Down to the Time of Battle! The Navy’s Strongest Lineup in Position!
460. A Vast Fleet Appears! Here Come the Whitebeard Pirates!
461. The Beginning of the War! Ace and Whitebeard’s Past
462. The Force That Could Destroy the World! The Power of the Tremor-Tremor Fruit!
463. An All-Consuming Inferno!! Admiral Akainu’s Power

Disc 4
464. A Descendant of the Beast! Little Oars Jr. Full Speed Ahead!
465. Justice for the Winners! Sengoku’s Strategy in Action!
466. Straw Hat Team Arrives! Tension Grows at the Battlefield
467. Even if it Means Death! Luffy vs. The Navy; The Battle Starts!
468. Hard Battles, One After Another! Devil Fruit Eaters vs. Devil Fruit Eaters! 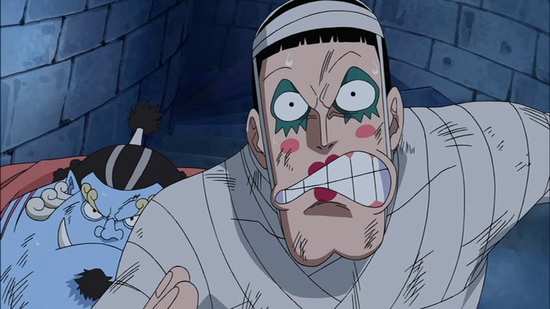 One Piece is presented at a 1.78:1 anamorphic ratio, and we get anime of the quality that we’ve come to expect on DVD in this high definition age. It is native NTSC encoded progressively the image is clear throughout, and now obviously comes from an HD source, so improved is the line detail, although there is the odd moment of shimmer on the really fine detail. Colours are strong, the animation is vibrant, and there’s no more judder if you’re watching the show with progressive playback. There are still moments where the animation really takes a walk on the wild side, bringing to mind the wackiness of Tex Avery cartoons and the like. This is a show where surprise can make people’s eyeballs bug out of their sockets, and their jaws drop to the floor.

This time around, I had to put up with some jerky pans and scrolls when played back on a good old fashioned UK DVD player outputting NTSC for 50Hz TVs through a SCART socket. It’s odd as usually NTSC playback isn’t an issue on that player. 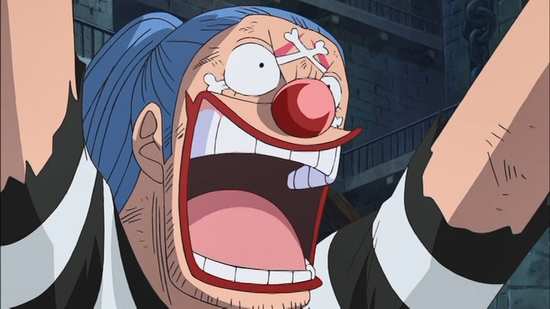 You have the choice of DD 5.1 Surround English, and DD 2.0 Stereo Japanese, with optional translated subtitles and a signs only track. As usual, I watched the series through in Japanese with subtitles, and found a fairly standard shonen anime dub, with enthusiastic and over the top performances that suit the tone of the show well. The stereo does a good job in conveying the show’s ambience and action sequences. Where One Piece really impresses is in its music score. Far from the comparatively weedy synth efforts afforded to the usual anime shows, One Piece apparently gets a full on orchestral score, at times giving the show an epic and grand soundscape that by far belies its comic book origins. The subtitles are free of error and are accurately timed. There are English language text overlays burnt into the print. Any place where a new character or new location is introduced, text appears to inform us of it. Given that One Piece has a signs only track as well as subtitles, I’m not sure why this was done. 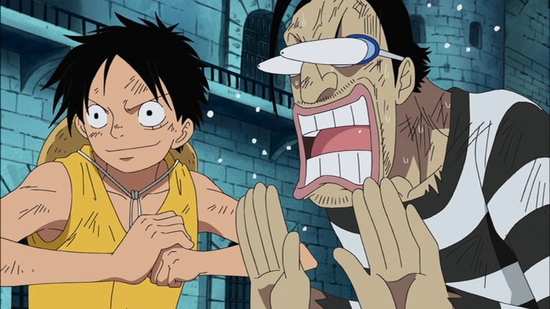 The discs present their content with static menus set to the background music from the show. The episodes can be played with Marathon Mode, stripping out the credit sequences.

Disc 1 autoplays with a trailer for Kamisama Kiss. 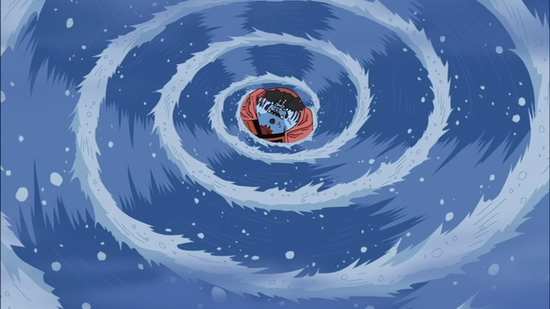 Disc 2 autoplays with a trailer for Garo. 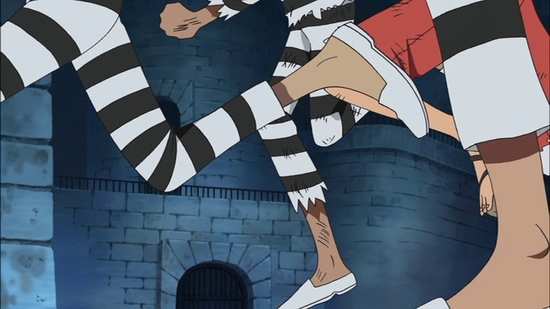 Disc 3 autoplays with a trailer for Funimation NOW, and there is an audio commentary on episode 462 with ADR Director Joel McDonald and voice of Jimbei, Daniel Baugh.

Disc 4 autoplays with a trailer for The Boy and the Beast, and has an audio commentary on episode 468 with ADR Director Joel McDonald, R. Bruce Elliot (Whitebeard), and Kyle Phillips (Marco). 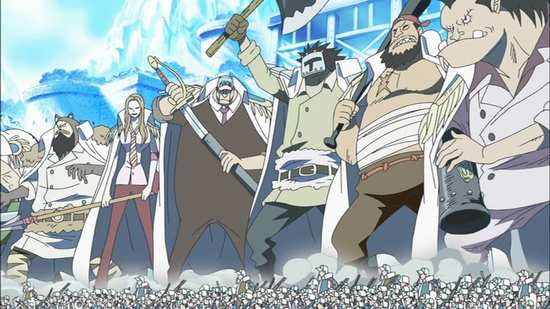 Robin’s Search joins her voice actor Stephanie Young in the library for 4:39.

Finally on this disc, you get two textless openings, and trailers for Assassination Classroom, Yona of the Dawn, Fairy Tail, Gonna Be the Twin-Tail!!, and Shonen Hollywood –Holly Stage For 49-. 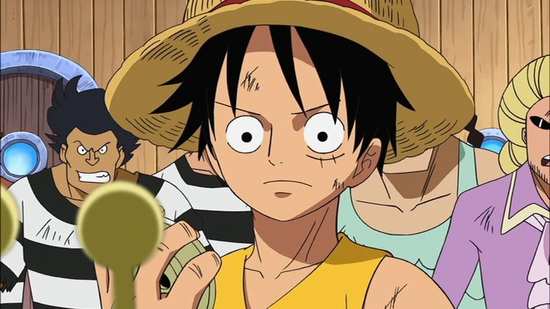 If One Piece isn’t in the doldrums at this point, it certainly is in danger of being becalmed, as we get another collection of episodes with the Straw Hat Pirates separated to all four corners of the world, and the story concentrating on Luffy’s mission to save his brother from execution. Once again it becomes patently clear that Luffy’s solitary adventures just aren’t as much fun as Luffy’s adventures with his crew. The previous collection had just one stretch of filler to remind us of this, but this time we don’t even have that. Instead we get four episodes in the middle of the run to get us caught up on the solo adventures of Usopp, Zoro, Sanji, Nami, Chopper, Robin, Franky and Brook, and we get two filler episodes that recap Ace and Luffy as kids, and where we last saw the Warlords. 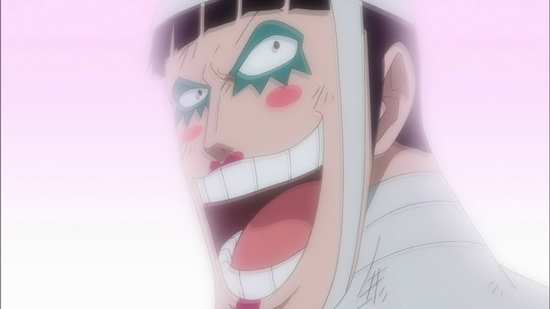 The rest of the collection is firstly devoted to the end of the Impel Down break-in and out, as Luffy, having discovered that Ace has been moved to the execution ground, has to fight his way out of the prison with his newfound allies, such as Buggy, Crocodile, Mr 3, and Ivankov. There then follows a desperate race to get to the execution in time (during which we catch up with the rest of the crew), and we learn that the Whitebeard Pirates have got there first, as they launch their assault on the Navy, fighting against 100,000 skilled soldiers, the Warlords, 3 Admirals, several Vice-Admirals, and a big handful of giants. 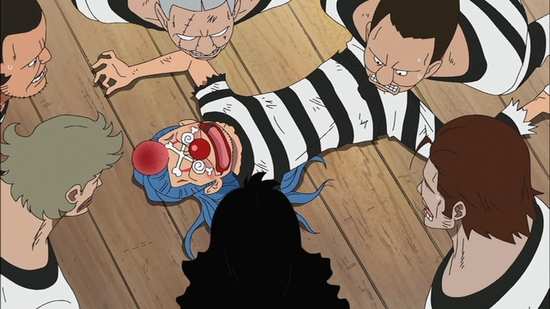 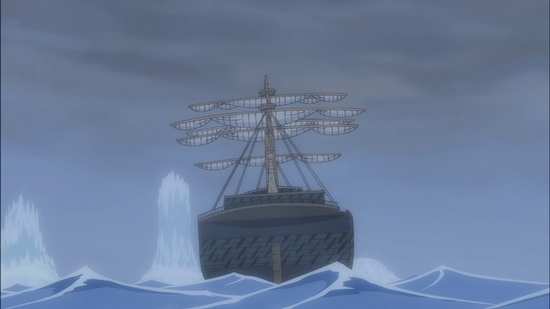 One Piece at this point is coasting on the momentum of its earlier seasons, it’s watchable enough and it’s entertaining, but more than I want Luffy to rescue his brother, I want him to reunite with his crew, because that is when this show is the most fun. This collection does have one saving grace though, the comic relief that Buggy the Clown provides, as his legend continues to grow, through no fault of his own!