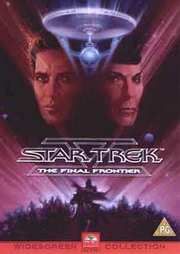 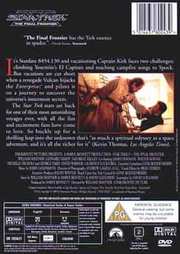 "Space, the final frontier." For four decades now, those simple words have been associated with one of the biggest cultural phenomena to come from US television. Star Trek may be in the doldrums right now, but at its peak, millions would tune in each week to watch an intrepid crew boldly splitting infinitives as they adventured their way into a hopeful vision of the future. The first, and many would say the best of the Trekkers were Captain Kirk and his gallant crew, although his adventures were initially not as well received, being cancelled after three years. They were only resurrected into a successful movie franchise after nearly two decades in hiatus. So when those magic words were applied to the fifth movie, expectations were high. Alas Star Trek V: The Final Frontier was something of a misfire, but that doesn`t stop me from revisiting the original DVD release from time to time.

An enigmatic Vulcan has taken the representatives of the three major powers hostage on a barren world in the Neutral Zone. This untimely crisis interrupts the hard earned vacation time of the Enterprise crew, although Scotty has foregone his leave to repair the new Enterprise, a ship with more than a few teething troubles. The rescue mission goes badly wrong when the crazed Sybok captures the landing party. He reveals his intention to steal the Enterprise and take it to the centre of the galaxy, where lies the fabled planet of Sha-ka-ree and an encounter with divinity itself. Sybok has a mental power that converts people to his cause, and Kirk finds his own crew turned against him. Even his faith in Spock is shaken when Spock reveals that Sybok is his brother. Meanwhile the Klingons aren`t far behind.

A Special Edition with an anamorphic picture and plenty of bells and whistles has superseded this edition of Star Trek V. However if you do find this, you`ll have to put up with a 2.35: 1 letterbox transfer that does a pretty good job with the clearer scenes but struggles with grain and definition when it comes to dustier or darker moments in the film. There were moments that I felt that reds were over saturated, and of all the Trek films, this one suffers more than most when it comes to lacklustre special effects.

You get a choice of DD 5.1 English and DD 2.0 Surround German. The surround does a good job of conveying the effects, there`s plenty of ambience and the action gets some hefty LFE backing it up. There are plenty of subtitle options and they are all zoom friendly.

This barebones disc comes with the theatrical and teaser trailers. If you were dumb enough to fall for Paramount`s Collector`s Edition packaging, all nice and shiny, you got an extra CD, mislabelled as a CD ROM, that had about 20 minutes worth of sound effects from the Original Series. My joy was unconfined.

I`ve never used the word balderdash before, but that sums up this preposterous story to a tee. The search for God is a waste of ninety minutes, a sense of mysticism and wonder that is completely misplaced in this ridiculous premise. What makes it all the more disappointing is that of all the Trek excursions, it`s in this film that they manage to recapture the magic that existed between the original series characters, and explore the dynamics and friendships between them.

When you forget the plot, and concentrate on the Kirk, Spock, McCoy relationship in this film, it becomes an enjoyable experience. The strongest moments in the film are when the three are sat round a campfire discussing the meaning of existence and how it applies to the lyrics of `Row Your Boat`. The supporting cast also get to shine, though not always in a complimentary manner. Scotty knocking himself out on a overhead beam in a ship that he knows like the back of his hand, seems a crass and misjudged attempt to get a cheap laugh, and the less said about Uhura`s fan dance the better. But this film hints at a deeper friendship between the two than is explored in previous or subsequent Treks. Despite the plot, the guest cast acquit themselves well, with Laurence Luckinbill bringing an earnest veracity to the misguided Sybok, and David Warner making an early appearance in Trek as the bedraggled ambassador St. John Talbot.

Star Trek V, is fast paced, action packed and has that magic that has entertained generations of Star Trek Fans. It`s just a shame that the story was so pitiful. You can put your mind in neutral and have a good time with the antics of the original crew, and when it comes to character, Star Trek V is still light years ahead of most of the Next Generation films. This disc has been rendered obsolete by the release of the Special Edition, but if you don`t want to waste your time with special features then it`s probably still available in a bargain bucket somewhere.