Review of Exorcist, The
added by
Mike Mclaughlin 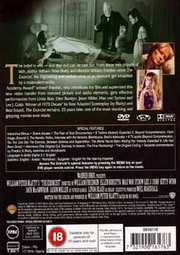 Back Cover of Exorcist, The

DVD
Exorcist, The: The Version You`ve Never Seen (US)

DVD
Exorcist, The: 25th Anniversary (US) 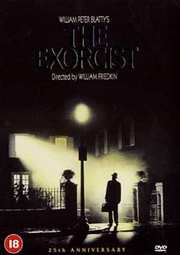 Synopsis:
The belief in evil - and that evil can be cast out. From these two strands of faith, author William Peter Blatty and director William Friedkin wove The Exorcist, the frightening and realistic story of an innocent girl inhabited by a malevolent entity.

Academy Award winner Friedkin, who introduces the film and supervised this new video transfer from restored picture and video elements, gets effective performances from Linda Blair, Ellen Burstyn, Jason Miller, Max Von Sydow and Lee J. Cobb. Winner of 1973 Oscars for Best Adapted Screenplay (by Blatty) and Best Sound. The Exorcist remains, 25 years later, one of the most shocking and gripping movies ever made.

There`s absolutely no doubt this is a landmark movie.
Does it look better today than it did back in 1973? You bet!
Does it sound better? Well...not really.
Being the ultimate horror movie, this movie had so many implications on its genre after its release.
Not many movies do a good job in portraying pure evil. This movie, however, does. You can literally FEEL the evil presence of Satan. Literally!
The video transfer is simply superb. The film looks much better on DVD than it ever looked before - no doubt about it.
My biggest disappointment was the (so called) DD 5.1 audio track. The surrounds were almost never used and when they were used, they did not create an appropriate sound envelope. The dialog is very clear, however, and is (obviously) coming from the center speaker.
My region 2 disk did not contain any extra features other than a short 2-minute introduction by the director, William Friedkin.
Would I recommend it? Yes, of course, but young teenagers might find it too intense at times.
posted by Zvi Josef on 23/7/2000 04:50
9 / 10

Still one of the best horror films ever made. It is a shocking film and works well as a dvd. The sound is clear but often very quiet. On vhs this makes the movie hard work but with the clarity of DVD, the quietness of several scenes contrasts vividly with the devil scenes and enhances the atmosphere.

The video quality didn`t seem that good. On the darker scenes the compression showed up defects.

Note however that it is very much an adult film - several controversial scenes and the language (many profanities) means it should be seen by a mature audience only.

The extras are good. The version I saw was the aniversary edition. The BBC documentary on the disk was excellent - one of the best extras I`ve ever seen (usually most are either publicity material or pap). I liked the commentary by the director - particularily on the meaning of several scenes. There is a lot of religous meanings in the film. The director did appear to be on a bit of an ego trip - watch the intro!

Totally recommended film - better than a sum of its parts simply because its one of the few intelligent horror films ever made. Worth buying as you`ll always be coming back to it. I`ve seen the film over 5 times in the past and I still enjoy it.
posted by am1001 on 30/10/2000 03:35
10 / 10

The Exorcist is BRilliant What else can you say about a classic like this 25 years old and still the power to terrify audiences. Absoulutely perfect dvd.
posted by m.chuck on 2/12/2000 11:57
6 / 10

The exorcist is a very good film still terryfiying 27 years on.
This said i find it hard to find myself in a mood where i want to watch it, i say this for a couple of reasons, firstly it is very very disturbing and secondly the atmosphere of the film is very intense and hard to enjoy, Don`t get me wrong the Exorcist is a very well made film but how do you take enjoyment from it?
The picture quality on this disk is by dvd standards below par but a hundred times better than VHS could ever be, the sound is better, the chilling voice of the demon is crystal. The extra`s are where the disk really excells a whole side dedicated to these gems, the documentary in particular is excellent. In all this film is a must for film buffs even if it`s just to say youv`e got it, but friday night popcorn munching cinema goers may want to look elsewhere!
posted by chris21 on 8/1/2001 22:55
kak
posted by Richard73 on 23/1/2001 18:05
8 / 10

"The one hope, the only hope, the exorcist". What a great tagline. "The Exorcist" has unfairly been marked as a horror film containing poor special effects and shocks. Nothing could be further from the truth. "The Exorcist" is a fantastic psychological drama that takes a universal fear, something wrong happening to your child that you cannot prevent and adding a demonic presence.

William Friedkin directs it with his usual flair for realism. The cinematography is superb and the effects are groundbreaking, realistic and beat CGI hands down. There is constant air of dread running through the film and it doesn't end happily.

Video: Newly remastered and looking superb. One needs only to look at the TV spots and trailers to see what a great job was done on this transfer. The great news about the transfer is that defects are minimal and not distracting. "The Exorcist" has had a reputation of being a dark film with little colour. This transfer refutes that. Though hardly bright, colours have clear definition here, something lacking from the VHS. The Iraqi scenes look the best with realistic flesh tones. Sadly, toward the end, where scenes are mostly black, blue and dark, contrast does seemed to be off with blacks looking like dark navy. There are also some edge enhancements (damn escalators for stairs again) and some over-bearing noise. However, these are minor complaints for a fine transfer of a 25-year-old film.

Audio: "The Exorcist" holds, what I believe is one of the best soundtracks ever. Foley work, reproduction and editing are magnificence. Sadly, while this 5.1 track is good, it is not as groundbreaking as the soundtrack itself. Surrounds are used sparingly and so is bass. However, dialogue and sound effects are audible, which is all I really ask for in a remaster. I hear the soundtrack on "The Version You've Never Seen Before" is better. I'll have to hear than then, won't I? Just hire this track up LOUD for starling effect.

Extras: Ahh, great extras for a great film. Is there anything more satisfying in DVD land? "The Exorcist" is presented on a double-sided disc. The film is on Side A, the bulk of the extras on B.

Up first are two audio commentaries. The first is a feature-length commentary by director, William Friedkin. Full of interesting facts and stories, Friedkin doesn't shy away from talking about the writer/actor and studio disputes he had. This is a essential commentary, despite Friedkin's high/low voice. Friedkin also provides a short introduction to the film.

The second commentary is half Blatty interview, half sound effects cues. Blatty offers story origins and what he did/didn't like about the film. Another interesting commentary.

On Side B: "25 Years of Fear: The Making of The Exorcist". This was shown on BBC2 at the time of the theatrical re-release. The 75-minute documentary was presented by Mark Kermode and was simply one of the best documentaries around. Sadly and inexplicitly, the documentary has been cut to 52 minutes for this. Kermode has been cut and so have other small discussion. Kermode is the real lost, he binded the interviews together so they made real sense and added history to the programme. Still, containing interviews from all the major players, this is a great documentary and a must see.

The "Interview Gallery" contains three segments with Friedkin and Blatty discussing certain scenes in "The Exorcist". These were filmed before Blatty's cut was release and there is an obvious friction between the two, which makes the interviews all the more interesting. The original ending discussed in these interviews is also included on the disc.

Rounding of the disc are storyboards and a bucket load of trailers and TV spot.

Overall: "The Exorcist" is a great film, sadly depreciated by MTV watching teenagers. It's a powerful film that will have you responding to it, either positively or negatively. The performances are great. Van Sydow is simply iconic as the exorcist. While Miller gives one of the best debuts ever, he's simply kinetic as Karass. Blair and Burstyn create an effective mother/daughter relationship while Lee J. Cobb is superb in the under-valued part of Lt. Kindermann. If anyone laughs at parts of this film that were not intentional, I ask you to slap them over the head. The DVD itself is a good buy, especially at the price they're asking. I bought mine for €9.99.
posted by directorscutIMDb on 16/2/2003 21:33