DVD
WWE: Finn Bálor: For Everyone 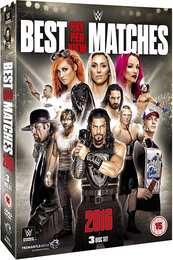 Synopsis:
Compilation of the biggest and best pay-per-view WWE matches that took place in 2016.
These heavyweight clashes include the Last Man Standing match between Dean Ambrose and Kevin Owens for the Intercontinental Championship.

The match between Seth Rollins and Finn Bálor to crown the first WWE Universal Champion, and the Money in the Bank Ladder match contested by Ambrose, Owens, Sami Zayn, Cesaro, Chris Jericho and Alberto Del Rio.

And much more across these 3 Action Packed Disks

Ladder Match for the Intercontinental Championship
Kevin Owens vs. Sami Zayn vs. Zack Ryder vs. Dolph Ziggler vs. Stardust vs. The Miz vs. Sin Cara
WrestleMania 32 • April 3, 2016

Hell in a Cell Match
Shane McMahon vs. The Undertaker
WrestleMania 32 • April 3, 2016

Match #7 in the Best of Seven Series
Cesaro vs. Sheamus
Clash of Champions • September 25, 2016