DVD
Soldier and Me - The Complete Series 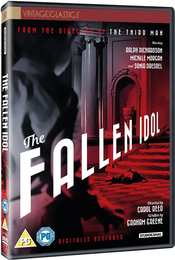 Synopsis:
STUDIOCANAL is proud to announce the release of a newly restored version of the classic British thriller, The Fallen Idol (1948) on DVD and Blu-Ray. Painstakingly restored to its former glory, The Fallen Idol is the critically acclaimed first collaboration between Oscar-Winning director Carol Reed and writer and novelist Graham Greene who, following the success of the film, would go on to work together on two further masterpieces of British cinema, The Third Man (1949) and
Our Man in Havana (1959).

Based on a short story by Greene, The Basement Room, The Fallen Idol tells the story of Phillipe (Robert Henrey), the young son of a diplomat who often finds himself alone in the big embassy. To entertain the boy, the household butler, Baines (Ralph Richardson: Doctor Zhivago, Our Man in Havana), invents wildly adventurous stories about his past. The child idolises him, but when Baines’ wife (Sonia Dresdel: While I live, The Trials of Oscar Wilde) falls to her death in suspicious circumstances, a bewildered Phillipe panics and embroils himself in the investigation, with potentially disastrous consequences for his hero.
The Fallen Idol, on its release, won both the BAFTA for Best British Film and The International Award for Best Screenplay at The Venice Film Festival and is still cited as being one of the most successful film to be told from a child’s point of view.