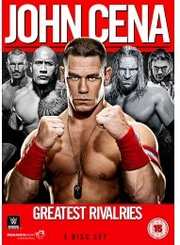 John Cena's Greatest Rivalries looks at the best feuds John Cena has had throughout his career.

First up I will say the way this is set up as a 'Streetfighter' type computer game VS screen is all kinds of awesome. It is a great way of doing this and before each match or feud Cena gives his thoughts on the particular opponent, which is also nice. Each opponent is given two matches which is fine, though I do think they could reduced the number of opponents and maybe included more promos between them or matches.

Eddie Guerrero is first and is a featured in two great matches, which is what you except from the late great Guerrero. Their Parking Lot Brawl is insane and includes one of his more bizarre Thuganomic raps.

Next we go back to his feud against Leviathan (or Batista as we know him) in OVW which makes me wish that WWE would release a 'Best of OVW' set because they had some amazing talent come through and always great to hear Jim Cornette. We then get to their Last Man Standing Match which is amazing to see them against each other all those years later.

Shawn Michaels could almost be a disk in itself as they had so many great matches. They of course include their now infamous Match of the Year from Raw which lasts nearly an hour. Now this is surprising because it is a TV match and not a PPV which it could easily have been and it is simply a wonder to behold. Their second match is a little shorter, but just as good and proof that they can deliver a quick and exciting match too.

Randy Orton could almost be described as Cena's opposite. Whereas Orton has all the plus points being a third generation superstar and was taken under the wing by Triple H as part of Evolution. Their match from Summerslam 2007 is a nice early match from both, but just showed how talented they both were. Their match from Raw is great, although I would have included their title unification from TLC 2013 which was a much better match.

JBL is an obvious choice and it is nice that they do include their Wrestlemania match which was Cena's first taste of the WWE Championship. This was a great match from both, very physical and you lots of back and forth. Their match from Raw is fine, though I would have included their I Quit match from Judgment Day which I recall being brutal.

Chris Jericho is one of the best all round wrestlers for the past decade. His work on the mic and in the ring was always wonderful. Their World Heavyweight Championship match at Survivor Series is great and though it is tainted because it was Cena's first match back after injury, but it can't be denied both put on an amazing match.

Edge is possibly the feud that put John Cena on the map and much like Shawn Michaels could almost fill a disk of just Edge matches. Their cage match from Raw is one of the best I have seen and even better that we get to see Lita too in one of her many gravity defying tops. However, their Last Man Standing match from Backlash is all kinds of insane and really one of the best matches from either superstar. It is shame that they didn't include more of their matches as they had so many great matches over the years.

Triple H is one of the greatest and the fact that Cena was able to not only compete on par with him, but also put on an amazing match shows how much respect they both had. Their match from Wrestlemania (despite the ludicrous Conan King of Kings intro from Triple H) is one of the best from either.

The Rock against John Cena is possibly how The Rock against Hulk Hogan was at Wrestlemania X8. Included is a verbal confrontation between The Rock and John Cena for the build up to Wrestlemania 29. This is one of the great moments and it is so great to see Mick Foley, Booker T, Dusty Rhodes and Bret Hart. Unlike a lot of 'talk' segments, this was great to watch. The match that they had at Wrestlemania 29 was amazing and it was a match that every time I though one would win it, something different would happen and that made the match so wonderful to watch.

No, you are not hearing me wrong. When you see the first screen you will see the opponents Triple H, CM Punk, Eddie Guerrero, The Rock, Chris Jericho, Batista, Randy Orton, Edge, JBL and Shawn Michaels. Yet, CM Punk does not appear on any of the three disks. I am unsure whether this was a mistake, whether they forgot to make the fourth disk or (seeing as some CM Punk is included on the Blu-ray) they just couldn't be bothered creating a different menu for both types. The sad thing is when I saw that screen I was waiting patiently for CM Punk. I would have quite happily have lost all the stuff with JBL, Batista and even Triple H for just one match with CM Punk and this is a huge let down especially when you consider that their feud and match at Money in the Bank is possibly some of the best in his career.

The set itself is fine as an overview of John Cena's career and it is a good set to accompany his previous one. However what the set doesn't really show is the 'feud' only the conclusion which comes from the match. If they showed more of the build, such as Edge's attack on John Cenas family or the build of the feud with JBL or The Rock it would have made it a much better set.

Though I enjoyed much of what was on here and no match is boring, I did feel only a few of them really should have been on here. This is almost a 'John Cena's Top Nine People to Wrestle' and though I agree with everyone on here and can't really think of anyone missing I think they could have better reduced to maybe four or five (Edge, Rock, Shawn Michaels, CM Punk and Randy Orton) and then we could have really seen how the feud evolved over a few matches rather than try and judge it over two.

John Cena's Greatest Rivalries could have been a great set and if they hadn't teased me with CM Punk I would probably have said it was. Instead it is just fine. If you are a John Cena fan you will love it as it does include some of his best matches and it is worth owning for the hour long match against Shawn Michaels alone, but if you are only a casual fan of his you may find it a little too boring and formulaic. There are no matches on here that are unwatchable and they do show how good Cena and his opponents are, but maybe with a bit more focus it could have been great.