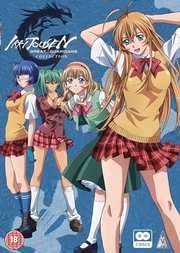 DVD
Aesthetica Of A Rogue Hero: The Complete Series

DVD
The Tower of Druaga: The Complete Series (6 discs)

It has to be karma. I get to review something great like Girls und Panzer, and Fate Zero, but there has to be balance in the universe, which means that I get the next instalment of my particular anime bugbear to review as well. I somehow managed to escape most of Battle Vixens, somehow getting away with only reviewing a three episode volume, but exploitative fan service infused with violence, with little redeeming narrative value was enough for me to avoid the other three volumes. The move from single volume releases to season sets is generally a good thing, but that did mean that I had to review all of Dragon Destiny. Dragon Destiny is supposed to be the good instalment of Ikki Tousen. It’s only supposed to get worse from there. MVM are bringing out the rest of Ikki Tousen this summer, both Great Guardians and Xtreme Xecutor. Maybe I did something rotten in my previous life. Anyway, if you like fleshy breasts, butts and panty-straining pudenda, and ridiculous urination inducing violence (and I freely admit that were I still fourteen, I would forsake all other anime for Ikki Tousen), then go ahead and buy with confidence. Otherwise, don’t expect a positive review. 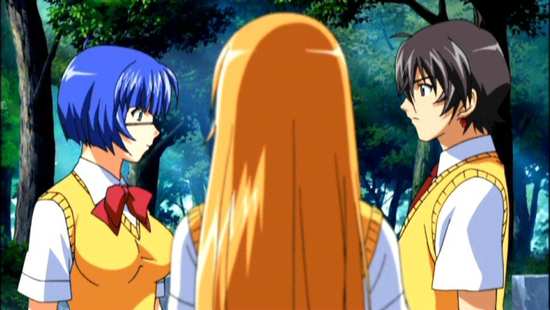 It’s all about girls getting into fights. It’s all about intrusive camera angles, boobs and gusset shots. It’s all about explosions of chi so powerful that with a single impact, a blow can cause any girl’s clothes to completely disintegrate, leaving her naked and blushing. It’s all about sex and violence. And the boobs have to be independently minded, the animators have to have degrees in boob physics, and if booby bounce doesn’t have a corresponding sound effect, the sound director is going to be fired. It’s a loose retelling of the historical novel, The Romance of the Three Kingdoms, itself inspiration for John Woo’s Red Cliffs and much, much more. The characters from 1800 years ago have been reincarnated as modern day high school students, but destiny is repeating itself, with the students almost compelled to relive their past lives through inter-school battles and tournaments. The Grand Tournament of Ikki Tousen: Battle Vixens is over, and now the focus turns to the power struggle between the three schools of Nanyou, Seito, and Kyoshou and the three dragons of Hakufu Sonsaku, Gentoku Ryuubi, and Moutoku Sousou. In Great Guardians, the story develops further when Hakufu’s younger sister Chubo Sanken shows up, a sister that she didn’t even know she had. 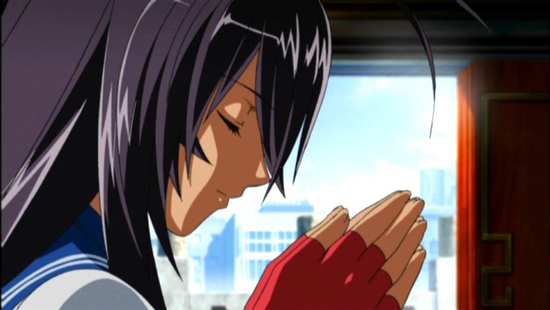 Disc 1
1. War is of Vital Importance to the State
2. All Warfare is Based on Deception
3. Nor Can the Dead Be Brought Back to Life
4. Regard Soldiers as Your Children
5. Do Not Fight Unless it is Critical
6. Intelligence Makes Great Spies
7. At First, Like a Virgin

Disc 2
8. Do Unto Others, Do Not Let Them Do Unto You
9. The Bigger Odds Wins, the Smaller Odds Loses
10. Strike the Enemy’s Plan
11. Start By Taking Away the Ones They Love
12. Coming Together 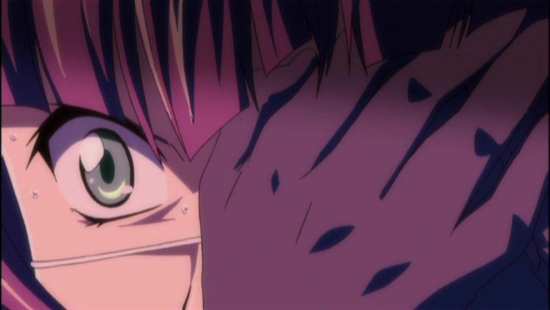 The discs make their way to the UK from Funimation via Australia’s Madman Entertainment, but all that Madman have done to the discs is strip them of the Funimation trailers, and add theirs, and MVM’s logos. What you therefore get are the Funimation discs, complete with 1.78:1 anamorphic NTSC transfer. Unfortunately it’s not a progressive one, but it’s still smooth and clear, even when up-scaled to a flat panel TV. The image is free of significant artefacts, and recreates the animation with clarity, detail and vibrant colour. It’s a comparatively simplistic animation, much like Battle Vixens and Dragon Destiny, with characters getting clean lines, the world design not particularly strong in detail, and with simple flat colours. The animation in Great Guardians is a small step up when it comes to the action sequences, while the animators go to town once again on the fan service. In the commentary, one of the actresses dubs this show, ‘Camel-Toe-sen’, and I won’t be able to think of it in any other way now. 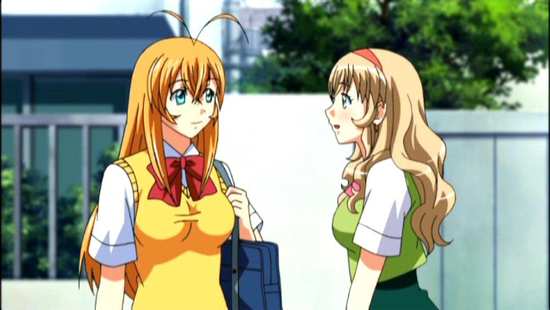 You have the choice between DD 5.1 English, and DD 2.0 Japanese, with optional translated subtitles and a signs only track. I went with the Japanese audio, and it does what it says on the tin, with the characters appropriately cast, maintaining continuity from the earlier series, and the action and the music coming across well. I gave the dub a spin, and it’s a mish-mash of continuity, the main cast returning from Battle Vixens, but the new characters returning from Dragon Destiny (the main characters were recast for that, but they obviously don’t reprise their roles here). I can take or leave the dub, but I certainly was impressed with the surround audio, and with how the action and music is presented on Great Guardians, this is more than just a simple upmix. The subtitles are accurately timed, but do suffer from the odd typo, and in particular, they keep spelling Ryofu’s name wrong. 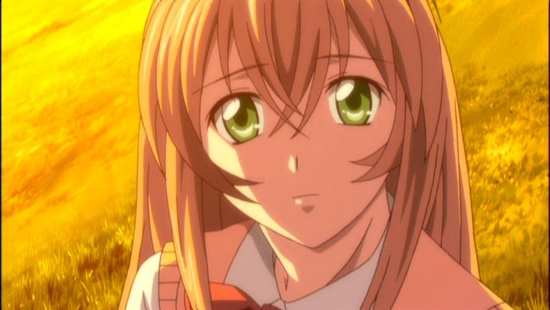 Both discs are sourced from Australia’s Madman Entertainment and present their contents with static menus and jacket pictures.

Disc 1 has the audio commentaries.

The first is on episode 2, and features ADR Director Jonathan Klein, and voice of Hakufu (Carrie Savage), and Koukin (Ted Sroka). They discuss reuniting for Ikki Tousen for the first time since Battle Vixens (Dragon Destiny had a different English voice cast), and there’s some interesting information about that first series dub for the now defunct Geneon, and some issues that Carrie Savage had with the show, and reconciling those with her faith. 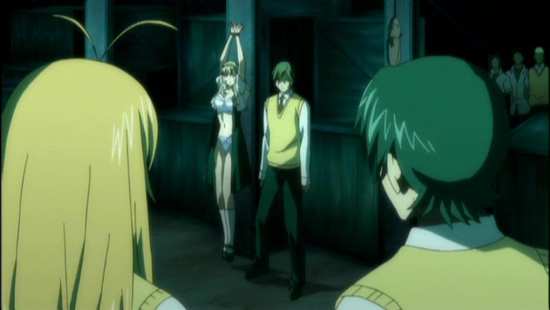 The commentary on episode 5 features Jonathan Klein again, this time with Michelle Knotz (Chou’Un), Georgette Reilly (Kakouin), and Jessica Calvello (Ekitoku), and it turns out that where there wasn’t an overlap, the voice actors from Dragon Destiny did return for the Great Guardians, mostly the Seito Academy and Kyoshou Academy characters. It turns into one of those free-for-all commentaries, and it’s hard to focus on what’s being said.

The rest of the extras are on disc 2.

Dragon Destiny fell afoul of the BBFC when it came to the extras, with one of the bonus animations not cutting the grade, corrupting minors left, right and centre. No such problems with Great Guardians though, and we get all of the original Funimation extras intact, beginning with six bonus OVA animations in Battle Tour Club Sexy Cosplays, Dangerous Jobs. Choose the Play All option, and you get 15 minutes worth of comedy and fan service in mostly static animations. These are in Japanese with subtitles only. 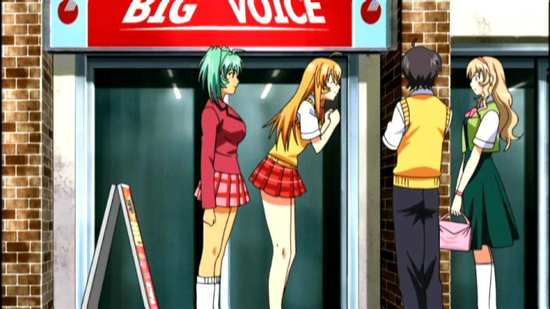 Great Guardians Radio Event at Tokyo Anime Fair 2008 sees four of the voice actors from the show recording one of those promotional radio shows in front of a live audience. It’s the usual fun and frolics, inconsequence and triviality, and there’s 30½ minutes worth to appreciate.

There is a Commercial Collection with 4 trailers, a Promotional Video, the U.S. Trailer for the show, and the Textless Credit Sequences. 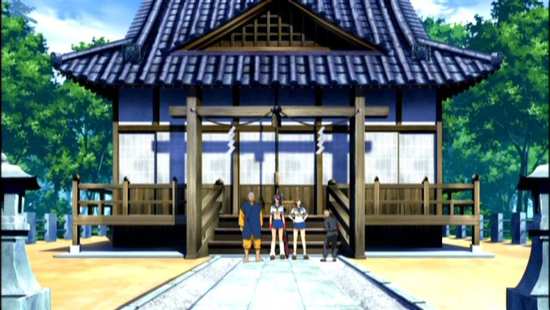 Ikki Tousen: Great Guardians is tolerable! I know that sounds like I’m damning it with faint praise, but given how I reacted to Battle Vixens and Dragon Destiny, that’s a revolutionary about face on my part. I sat through the twelve episodes of Great Guardians and never once did I find myself repulsed, shaking my head in disbelief, or just face-palming at a show that went about ticking all of the boxes on the Daily Mail ‘ban this foreign muck’ checklist. If you twist my arm, I’ll even admit to enjoying a couple of episodes. 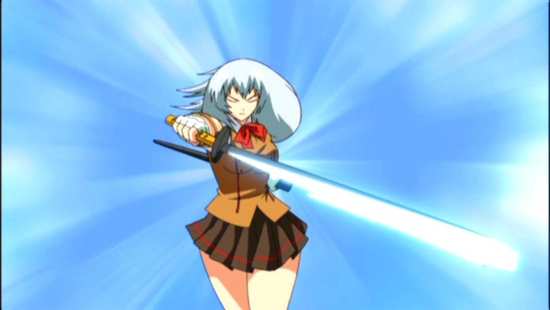 I always found something nasty and exploitative about the first two series of Ikki Tousen. There was very little I liked about the characters, and the fight sequences seemed to focus on degrading the female characters and exploiting the fan service. There was also very little in the way of story to the show, beyond the resurrection of historical characters in high school student form, and the recreation of their battles. 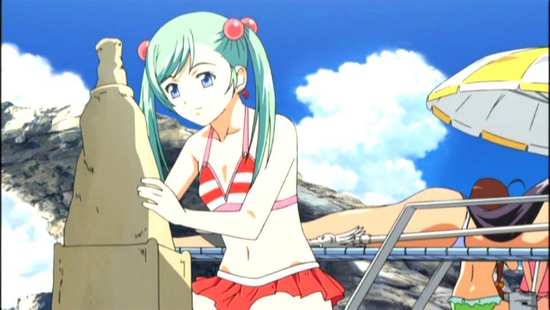 Ikki Tousen Great Guardians steps away from that, and tones down the exploitation, apparently by creating an anime original story. There’s a lot less in the way of fighting in this series, certainly not as much sex, although nudity still abounds, but there is more in terms of character development, in terms of narrative, and especially in terms of comedy. 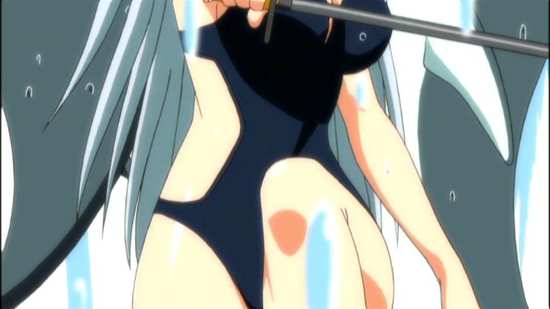 The first development is the arrival of Hakufu’s younger sister Chubo, a sister that she didn’t know she had. In typical Hakufu style, she accepts her with open arms and without question. Chubo is certainly enigmatic, but she’s also polite, soft spoken, kindly and non-combative. She’s a supporting character, although an interesting dynamic ensues between her, Hakufu and Koukin. The second development is the resurrection of Ryofu, a character who originally met her demise in the first series. She has amnesia of course, can’t explain her return, and the blank slate means that she too has a ‘nice’ personality, likeable and vulnerable. This causes no little consternation to Ryomou, who had issues with the original Ryofu, not least in the triangle that developed between her, Ryofu and Saji, but gradually she comes to accept Ryofu’s return. 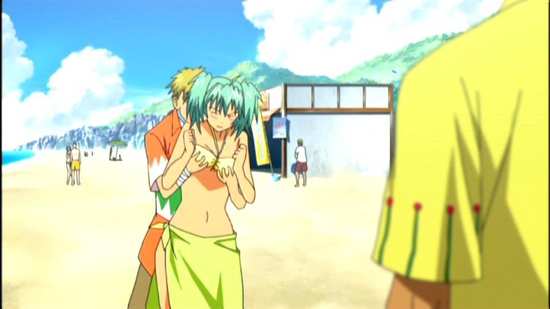 The third development is the arrival of a mysterious hooded fortune teller, who is manipulating events to fulfil her own agenda, one that is brought about by her dark past. This story arc develops over the series, and drives the narrative thrust of this story. And while there is action, and the occasional fisticuff, it isn’t until the final episodes that it gets full on Ikki Tousen. The first few episodes could be from any comedy action high school anime, as the story explores its characters and has fun with them in whatever trivial way it alights on. It could be using karaoke to try and jog Ryofu’s memory, magic beads wreaking havoc at Seito Academy, the obligatory swimsuit episode at the beach, the early episodes are even fun at times, despite their clichés. 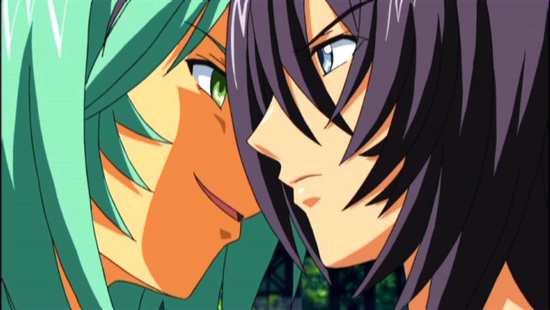 As the story progresses, thing get a little more serious, and the typical combination of sex and violence ensues, but it never feels as explicit or as exploitative as in the earlier seasons, playing more for fun. Also the characters and the story are strong enough to justify when things begin to get a little darker. There are one or two moments that push the limit, but it never feels as crass or as nasty as it did with the first two series. Ikki Tousen Great Guardians is watchable, which is a sentence I never thought I’d write.