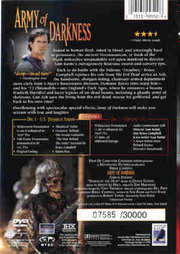 Back Cover of Army of Darkness: Limited Edition 2 Disc Set 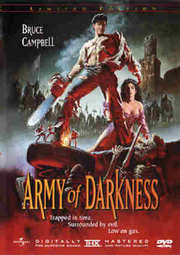 Back to do battle with the hideous "Deadites," Bruce Campbell reprises his role from the Evil Dead series as Ash, the handsome, shotgun-toting, chainsaw-armed department store clerk from S-Mart`s housewares division. Demonic forces time warp him - and his `73 Oldsmobile - into England`s Dark Ages, where he romances a beauty (Embeth Davidtz) and faces legions of undead beasts, including a ghastly army of skeletons. Can Ash save the living from the evil dead, rescue his girlfriend, and get back to his own time?

Overflowing with spectacular special effects, Army of Darkness will make you scream with fear and laughter.

`My name is Ash and I am a slave`
Ash, played by cult favourite, Bruce Campbell excells in a very funny and cool film.There are two versions of the film, a U.S theatrical cut and the directors cut.
The U.S Theatrical Cut - has a short but good docu on `The Men Behind The Army` and a really cheesy trailer.
The directors cut disc is the best out of the two - audio commentry from Bruce Campbell, Sam and Ivan Raimi. The cut that Raimi wanted ,including a extended Mill scene with the little Ash`s and other bits of dialogue and the original downbeat ending. Some of the new bits look rough but the overall picture quality is average. Go out and buy it now, I am number 17,245/30,000.
posted by Satman on 2/11/1999 03:54
9 / 10

Army of Darkness is the best of the Evil Dead Trilogy.
I used to think it was part 2 but having seen this 2 disc set I`ve changed my mind. Bruce Campbell is God! The only downer is that he`s not in more films. He`s just so cheesy! It`s brilliant! The commentary track is one of the best I`ve heard, even if Ivan Raimi is a bit of a tit!
The extras are top notch but the menu systems are a little dull.
Oh well! Can`t have it all! A must buy!
PS. You`ll have to buy the 2 dics seperately now as this boxed edition is no longer available!
posted by Lee Thews on 21/11/2000 17:58
9 / 10

It`s fairly obvious that all of the visitors reviews for the AOD 2-disc set will be very favourable, as only a real fan would buy it in the first place (especially at the obscene price it fetches these days!). Having just aquired one myself, I`m afraid I`m not going to buck the trend either, I`ll try and be as objective as possible though (can`t promise anything!).

If you have fond memories of the film, then the first disc with it`s THX remastering of the already available cut will be a revelation! The picture just screams "Digital Quality" and the new 5.1 audio screams the same, it`s like watching it properly for the first time ever. Aside from the impressive A/V performance, there is also the originally planned ending (as an extra) and a great little feature called "The men behind the Army" which provides some real insights into the effects and how they were achieved (on a shoestring budget too).

The movie on this THX disc is the officially released "Theatrical" version. It has a more upbeat ending and the finale that I actually prefer, so I can`t recommend this DVD enough and it can be bought on it`s own right now (why don`t you?!). To put things in perspective, not everybody will enjoy the film and might not like the mixed-up nature of it all. It begins with a prologue explaining how Ash lost his hand (in the previous E.D film) and that a force of un-stoppable evil has pulled him into a time-warp, this is often enough for people to say "Whaa?" and then refuse to buy into the storyline at all. AOD needs to be cut some slack now and again, but the overall entertainment value far out-weighs any shortcomings.

What`s so good about AOD then? Well, I haven`t got room to fully list it`s enjoyable attributes and great moments, so I`ll just mention a few strong-points... An unusually inept, yet very likeable hero (Bruce Campbell). Genuinely imaginitive direction (Sam Raimi) and the most fitting score you`re ever likely to hear (Joseph Lo Duca/Danny Elfman). It`s basically a bizarre thrill-ride that`s often unpredictable and doesn`t pause for breath. Think of Jason & the Argonauts with more dark humour and a modern-day supermarket worker (reluctantly) at the centre of it all (sounds good to me anyway!).

The only flaws with the film (if you MUST hear the negative stuff!) are the old-fashioned effects and faint lack of logic. To be fair, some of the make-up/creature models would be good even by today`s standards, it`s more the jarring mixture of stop-motion/back-projection and live action that lets the side down a little (cut it some slack remember, it was pre-CGI) It`s fine for the most part, but the DVD format always exposes these sorts of things and I`m just trying to be honest for those that have never seen the movie before. It actually adds a certain charm to it all really, but like I warned you to begin with, I`m probably biased!. The parts of the story which puzzled people slightly are all explained thoroughly on disc 2 (Jackpot!).

The director`s cut is on the second disc and contains 16 minutes of additional footage, the picture quality is vastly inferior to the re-mastered disc though and varies from quite good to quite awful. The anamorphic image is noticeably cropped too and is very claustrophobic IMO, you`ll have to make allowances because the new stuff is probably from a different source and at times I thought I`d selected "composite" output by mistake. The DC is about watching the originally intended product and not "reference quality" video or sound (audio is 2.0 only). So ignore these niggles and watch this version with the commentary track ON because it`s an exceptionally good one and the only other disc which rivals it is Evil Dead 2 (with the same two contributors!). They`re almost as good as the film if you listen closely enough because they`re pretty funny, not just informative.

The deleted scenes on this DC disc are fantastic. Again, the quality is poor, but it doesn`t matter at all. It`s a privelege to finally complete the story (so to speak) because these 4 scenes fully explain the mirror incident in the windmill, Why Henry knew his help was needed and even why Ash says "You want some MORE? huh?" to that particular guy near the pit (he`d attacked him once already!).... Anyway, if you like the film, this is a sensational disc in terms of content (if not quality).

Basically, WOW!, this is what DVD is all about and this 2-disc set feels like a truly complete package. If you don`t want to pay over the odds, then you should seek them out separately because they`re definitely worth the effort.

Army of Darkness is the funniest and most outrageous of the Evil Dead films. Though lacking the blood and gore of the first two films, Army Of Darkness manages to go for the comedy. Bruce Campbell, though he can`t act, is brilliant and though the script is hammier than a pig farm and the effects made on a budget of £2.50 it is still enjoyable.
This is the best version of the film out on the market, and a bonus is the 15 minutes of extra footage (You can tell when the footage appears-it`s when the picture goes rubbish) and a wildly entertaining commentary. The film is THX certified and looks and sounds great!
posted by verhoeven on 29/11/2001 19:12
9 / 10

The final in the Evil Dead Trilogy and the most funniest! Bruce Campbell is funny as ever as Ash, who is now in Medevil England where he has to retrive the Necronomicon to save the people there. Though it lacks the trade mark Evil Dead violence it still has great moments.

The THX certified film on disc one has a brilliant picture, disc two, the directors cut, the picture differs, from good to bad!

The commentary is good and funny and informative. The documenatry `The Men Behind The Army` is ok and there`s a trailer. The deleted scenes are ok and the original ending much better than the choosen one.
posted by the_film_king on 7/8/2003 18:57