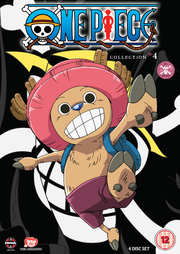 Review for One Piece Collection 4

Do you know what makes these shonen anime work? It’s continuity and regularity. You need a scheduled fix of mainstream, long-running anime goodness to keep on top of the story, and to keep the characters fresh in the mind. That’s where television broadcasts come in. Unfortunately DVD release schedules aren’t necessarily as accommodating. This December, Manga will resume another long running action show after a hiatus of over a year, and I have absolutely no recollection of the previous volume. This year has zipped by at a pace though, and in it we’ve had the first four collections of One Piece released. Unlike Fairy Tail, we don’t have to wait for the next lot to be licensed, dubbed and released, as Manga Entertainment will bring us collection 5 and onwards in 2014, and with any luck, long before collection 4 has a chance to fade from my memory. 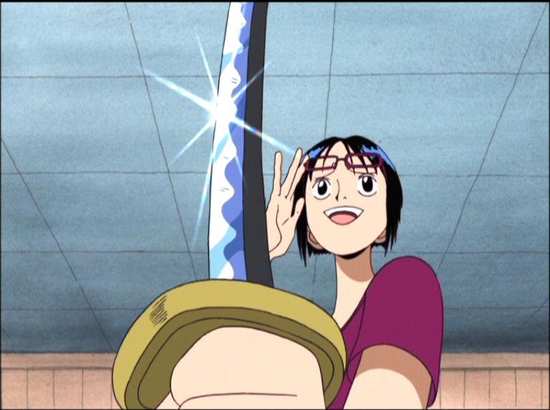 Monkey D. Luffy wants to be a pirate. No he wants to be the best pirate of them all, sail the Grand Line, find the legendary One Piece treasure left behind by Gold Roger, and become the Pirate King. He’s inspired in this by his mentor, Red-Haired Shanks, who saved his life when he was a child. He also ate the Gum-Gum fruit, a devil fruit which has given him stretchy rubber limbed abilities, although at the cost of his ability to swim. You’d think this would be a fatal handicap in a pirate, but Luffy has set sail nevertheless, looking to gather the best crew on the high seas, and venture forth onto the Grand Line. The first candidates for his crew include the mighty pirate-hunter swordsman, Roronoa Zoro, the skilled, pirate-hating thief Nami, the world’s greatest liar, Usopp, and the toughest chef around, Sanji. 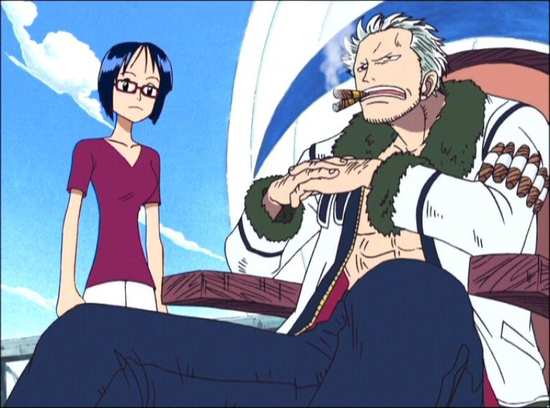 Previously on One Piece, the Straw Hat Pirates made it to the Grand Line and sailed immediately into big trouble when they rubbed the Baroque Works criminal organisation the wrong way. Baroque Works are trying to take over the Kingdom of Alabasta as their first step to world domination, and when Luffy agrees to help Alabasta’s Princess Vivi regain her kingdom, he invites a whole lot of attention from the Baroque Works agents. The crew manages to escape their trap on Little Garden, but after setting course for Alabasta, Nami falls dangerously ill. The crew of the Going Merry need to find a doctor and quickly, but at the worst possible moment, pirates attack them. 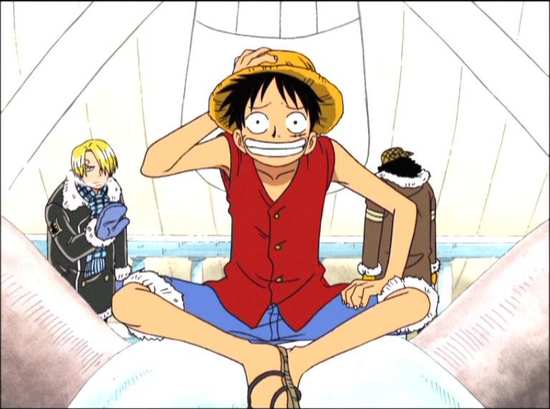 The next 25 episodes of One Piece are presented across 4 discs from Manga Entertainment.

Disc 1
79. A Raid! The Tin Tyrant and the Tin Plate Wapol!
80. An Island without Doctors? Adventure in a Nameless Land!
81. Are You Happy? The Doctor Called Witch!
82. Dalton’s Resolve! Wapol’s Corps Lands on the Island!
83. The Island Where Snow Lives! Climb the Drum Rockies!
84. Blue-Nosed Reindeer! Chopper’s Secret!
85. An Outcast’s Dream! Hiriluk the Quack! 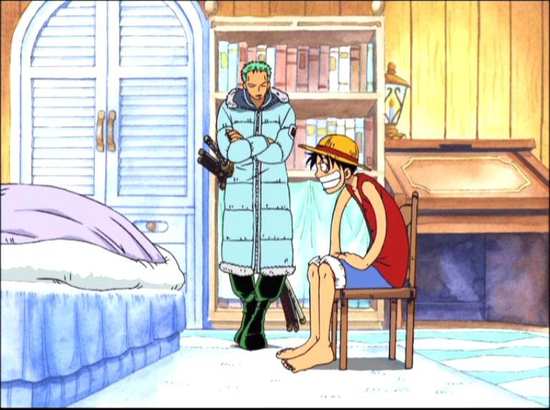 Disc 3
92. Alabasta’s Hero! A Ballerina on the Ship!
93. Off to the Desert Kingdom! The Rain-Summoning Powder and the Rebel Army!
94. The Heroes’ Reunion! His Name is Fire Fist Ace!
95. Ace and Luffy! Hot Emotions and Brotherly Bonds!
96. Erumalu, the City of Green and the Kung Fu Dugongs!
97. Adventure in the Country of Sand! The Monsters that Live in the Scorching Sand! 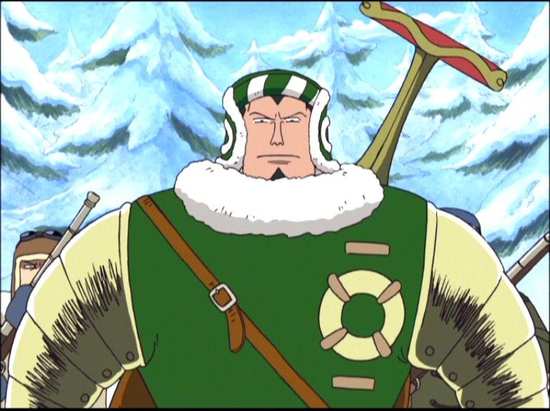 Manga Entertainment and Toei logos precede the content on the disc, which dating from 1999 is presented in 4:3 regular format. The show gets a native PAL transfer with 4% speed-up. The image that is clear and sharp throughout, but there’s no getting away from the vintage and the budget of the show. There is a bit of rainbowing around fine detail, but by and large the biggest problem with the transfer is the compression artefacts around fast motion, bursts of mosquito noise that on occasion are distractingly obvious. Also on a rare occasion, the quality of a scene will suddenly drop, aliasing will increase and the image will take on a static feel, as if it’s just a placeholder for an animation that was never completed. 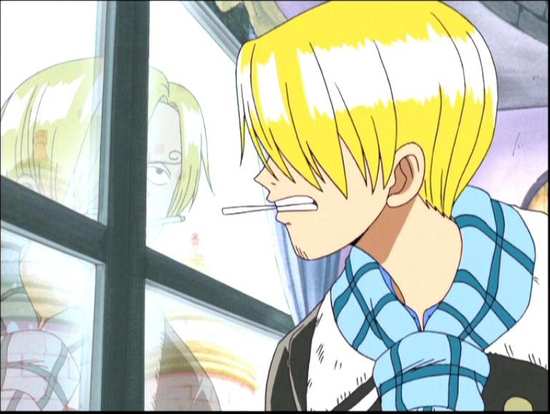 One Piece looks like an early digipaint show, an anime accomplished wholly in the innards of a computer, and the stability of the image, absence of flicker and print damage tends to support that. There are moments where the show can look a little too static and obviously digital, but on the other hand, there are moments where the animation really takes a walk on the wild side, bringing to mind the wackiness of Tex Avery cartoons and the like. This is a show where surprise can make people’s eyeballs bug out of their sockets, and their jaws drop to the floor. 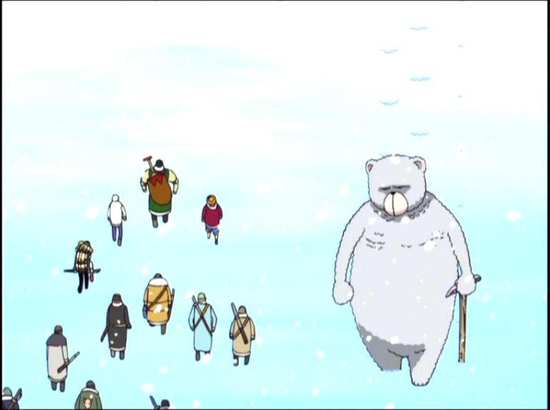 You have the choice of DD 5.1 Surround English, and DD 2.0 Stereo Japanese, with optional translated subtitles and a signs only track. I’m still to try the dub while in a waking state, although give the quantity and rate of One Piece coming to the UK, that isn’t very likely. As usual, I watched the series through in Japanese with subtitles, and found a fairly standard shonen anime dub, with enthusiastic and over the top performances that suit the tone of the show well. The stereo does a good job in conveying the show’s ambience and action sequences, while you get an instant hit of spatial separation in the audio with the opening shot of seagulls. Where One Piece really impresses is in its music score. Far from the comparatively weedy synth efforts afforded to the usual anime shows, One Piece apparently gets a full on orchestral score, at times giving the show an epic and grand soundscape that by far belies its comic book origins. 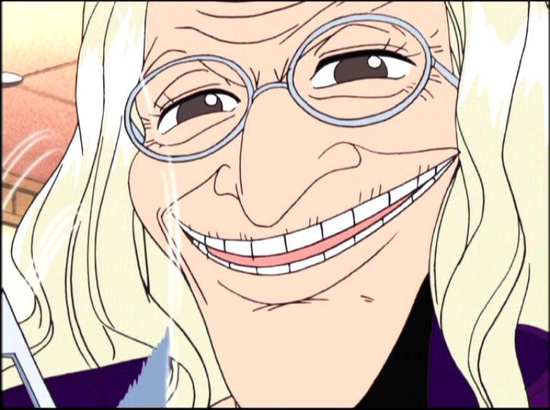 The subtitles are free of error and are accurately timed. I did have a problem with episode 95’s Japanese audio, with the dialogue too low in the mix to be made out clearly, especially for Luffy and Ace. I also noticed the telltales of pitch correction evident in this collection, with long tones sounding clipped and distorted in the background music. 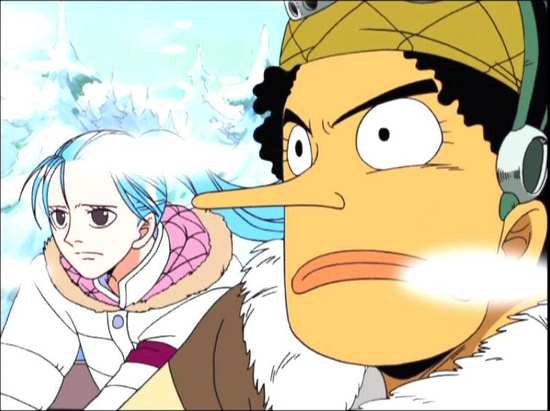 The discs present their content with static menus set to the English version of the theme song, with jacket pictures to look at when the discs are at rest in compatible players. 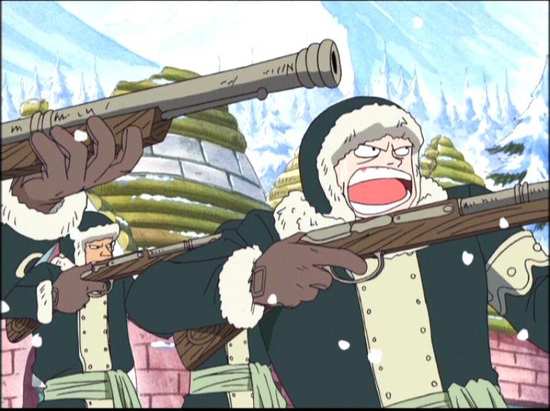 Also on disc 2 are the textless credits, presented in NTSC-PAL to maintain the original audio pitch. Note that the songs are dubbed into English for the English version, and the audio is locked during playback. After getting it right for collection 3, the locked subtitles on the Japanese version return to render the textless claim moot. 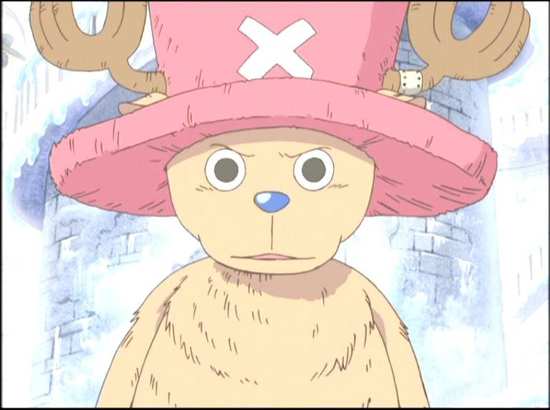 One Piece Collection 4 is a collection of two halves. It gets really good and engrossing in the first half, before slowing things up and somewhat losing the plot in the second. The first half is where we meet Tony Tony Chopper, the reindeer that ate the Human Human Fruit and gained sentience. For a lot of complicated reasons, he’s training to be a doctor when we meet him in this collection, and coincidentally, the crew of the Going Merry is in sore need of a medic. The real point is that Tony Tony Chopper is probably the cutest character ever to be put to anime, lovable and endearing, and with the odd trait of not yet having figured out how to hide. The new end theme animation to the show that debuts halfway through this run is devoted wholly to Chopper, and who can blame the animators. He is cute with a capital Q! 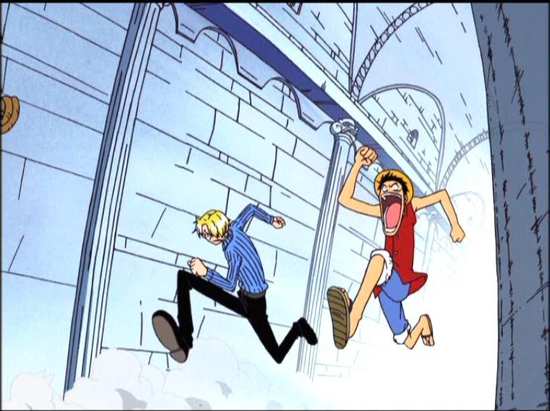 The episodes up to 91, the Drum Island arc cover the introduction to Chopper and his back story, when Nami falls ill on the Going Merry, and the crew desperately need to find a doctor. Making landfall at Drum Island turns out to be a big mistake as it’s an island without any doctors. It’s a fledgling republic, having just gotten rid of their tyrannical monarch Wapol, after he banned all doctors bar his own personal physicians, in the belief that it would make his subjects more loyal to him if they relied on his munificence for medical care. Of course munificence would only be forthcoming after a sufficient influx of cash. 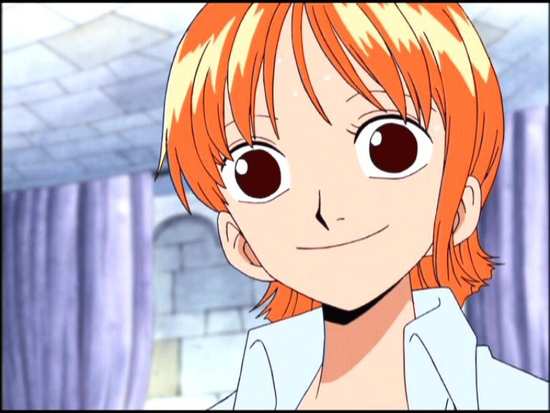 When pirates attacked, Wapol and his retinue fled like the cowards they were, and Drum Island’s people celebrated the departure of the despot, even if it meant that they only had the one doctor left, the eccentric Kureha. When Luffy and the others reach the island, the only hope they have for Nami is to find Doctor Kureha, who lives in the old palace atop the highest peak, guarded by giant man eating bunnies, and hiking bears. Luffy and Sanji take Nami to climb the mountain, unaware that Dr Kureha and her reindeer Chopper are out doing the rounds of the villages. During that time when they keep missing each other, Wapol and his retinue return to the island, looking to pick up his rule where he left off. With his own Devil Fruit Powers, he has the islanders at a disadvantage. When Luffy finally does encounter Dr Kureha, he meets Chopper and he’s instantly taken with the little shape-shifting reindeer-man, and becomes determined to recruit him to his crew. 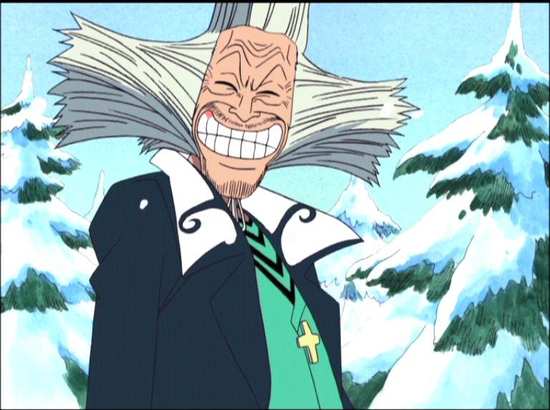 It seems impossible at first, as Chopper hasn’t had the easiest life. He was shunned by the rest of the herd after he ate the Devil Fruit, while humans cast him out as a monster. It was only an unconventional doctor who took him under his wing, and imparted his dream of creating a cure for the islanders’ cold frozen hearts. When that doctor fell victim to Wapol’s purges and a tragic mistake, it was only Dr Kureha left who would take pity on the reindeer, but by the time Luffy encounters Chopper, he’s untrusting and introverted, and quite frankly scared of humans. This isn’t helped by Luffy and Sanji’s first thought after they recover from their ordeal climbing the mountain, of reindeer steaks... 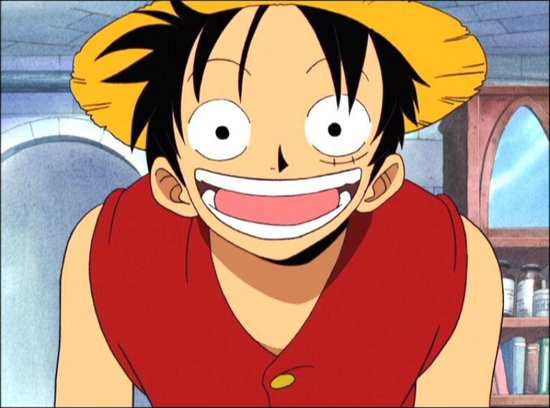 The second half of the collection begins the Alabasta arc, as Luffy and his crew accompany Princess Vivi to her homeland, and agree to help her thwart the Baroque Works plans for her island. It also promises to be difficult, with a rebellion being fomented against her father, King Cobra, a rebellion led by her childhood friend Koza. It certainly makes for an interesting back story, which is gradually revealed over the subsequent episodes, as well as the introduction to this parched desert land. There is the added intrigue of meeting Luffy’s older brother Ace D. Portgas, another pirate with dreams of conquering the Grand Line. In true wacky One Piece fashion, Ace is another far-fetched character, one with a tattoo of his name on his arm. But his tattooist spelt it wrong, and had to cross out the S and replace with a C. 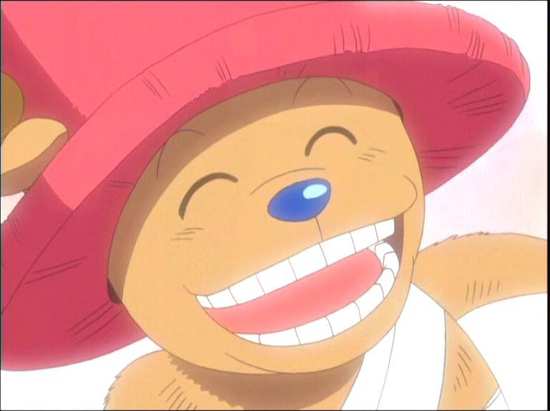 The problem here is that the story slows right down. I don’t know if this is canon, or if it is filler material concocted by the anime-ists, or if it’s just the tendency to wander aimlessly for forty days and forty nights whenever anyone enters a desert, but there are far too many episodes here of meaningless nonsense, and too few that actually forward the narrative. The added problem is that the aim is for Vivi to reach the rebels and somehow talk them out of raising arms against her father. The problem is that they head off in completely the wrong direction, which means that by the end of the collection, you do get the feeling of 12 episodes wasted. As for Baroque Works, they slip mostly into the background of this collection, where they continue to scheme and plot. Some of the best One Piece yet is followed by some of the most pointless, yet taken as a whole, it boils down to another watchable collection of episodes.