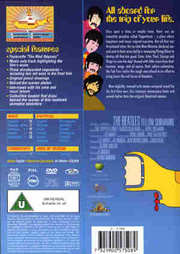 Back Cover of Yellow Submarine 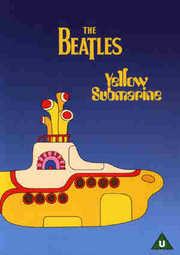 All aboard for the trip of your life
Certificate: U
Running Time: 90 mins
Retail Price: £19.99
Release Date:
Content Type: Movie

Synopsis:
Once upon a time... or maybe twice, there was an unearthly paradise called Pepperland - a place where happiness and music reigned supreme. But all that was threatened when the terrible Blue Meanies declared war and sent in their army led by a menacing Flying Glove to destroy all that was good. Enter John, Paul, George and Ringo to save the day!

Armed with little more than their humour, songs, and of course, their yellow submarine, the Fab Four tackle the rough seas ahead in an effort to bring down the evil forces of bluedom. Now digitally restored with stereo surround sound for the first time ever, this visionary masterpiece looks and sounds better than the original theatrical release.

Special Features:
Featurette "The Mod Odyssey"
Music only track of the film`s score
Three storyboarded sequences - including two not used in the final film
Original pencil drawings
Behind-the-scenes photos
Interviews with the crew and vocal talents
Collectible booklet that dives behind-the-scenes of this landmark animated adventure

Film
This film is not easily summed up in just a few words. Just picture someone's drug trip featuring the Beatles and a host of their songs and you get the picture.
8 / 10

Image
The image, letterboxed at 1.66:1, looks good on the TV screen, but closer examination reveals that it's not quite up to par with far too much edge enhancement marring an otherwise almost faultless transfer. The film is not as sharp as it rightly should be and this is possibly because of the edge enhancement. Mild animation grain is featured throughout (which I'm in favour of) and the framing looks good, although minor obvious scanning on the top shows that it is not presented in full animation ratio, but close to it. If this had been 16:9 transfer I would have understood this matting but as this is a 4:3 transfer I can't see why this sort of masking would be applied.
7 / 10

Audio
There are two tracks reviewed here, the 5.1 surround track and the 2.0 original mono (although some of the songs appear in stereo, strangely).

The mono track bears the mark of the limited recording at the time and has a slightly indistinct sound. The surround track has a much wider stereophonic spread with much better overall quality. Also the distortion of the mono track in some of the songs has been eliminated from the surround track.

Extras
The extras are interesting, though the featurettes are slightly limited. I didn`t expect anything more, but hard core fans might want more thorough features.
6 / 10
posted by DVDfinnur on 17/4/2005 02:33