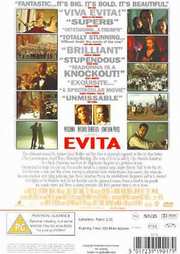 Back Cover of Evita
Related Items 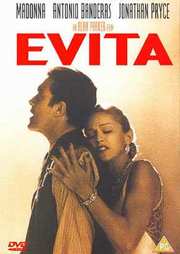 Synopsis:
The celebrated musical by Andrew Lloyd Webber and Tim Rice is stunningly captured on film by Alan Parker (`The Commitments`, `Angel Heart`, `Mississippi Burning`). The story of Evita, told by Che (Antonio Banderas), Eva Peron (Madonna) was born the illegitimate daughter of a penniless farmer.

Determined to make it to the top, Eva attaches herself to a popular tango singer Agustin (Jimmy Nail) in the big city. Eva becomes a radio and film actress, moving in influential circles within Buenos Aires society. But when she becomes involved with rising politician Juan Peron (Jonathan Pryce), the establishment disapprove and he is arrested.

Eva fights on for freedom, both for her husband and the oppressed masses. Peron is freed by the people, the couple marry and Peron is elected president. But Eva`s greatest battle is yet to come.

Evita is the story of the life of Eva Duarte, who later became Eva Peron, wife of Juan Peron, who led Argentina for a number of years after the second world war. When Andrew Lloyd Webber again collaborated with Tim Rice to write this excellent musical, there was some controversy over the portrayal of Eva, but, as usual, the quality of the music and the staging of the show won over the critics, and the musical made a household name of many stage performers including Elaine Paige.

The film version is Evita is an excellent version of the original stage show. Madonna is excellent in the title role, and she uses her voice to it`s full potential, singing the sometimes difficult score with accuracy and clarity. Antonio Banderas as the ever-present Che is also excellent. I was very impressed with his singing voice when I first saw this film; he fulfills the promise shown in the opening scene of Desperado (which, I have to admit, I didn`t think was him). There are also very strong performances from the excellent Jonathan Price, as Juan Peron, and Jimmy Nail, and the tango singer Magaldi, who is the first to succumb to Evita`s charms. (Watch out also for Andrea Corr, as Peron`s mistress, and Billy Piper, who plays an extra as an autograph hunter.)

Alan Parker`s direction is excellent. The film is set as an actual movie, rather than the stage-based versions of Joseph and Jesus Christ Superstar, and has all the qualities of any Hollywood blockbuster, with the added attraction (for me, at least) of a superbly written and superbly sung storyline.

The picture quality as very good, as you would expect. Evita is not an overly colourful film, but the colours and tones are well portrayed. There is some grainyness to the picture at times, but it is very slight, and it doesn`t detract from the film.

The sound quality is very good. It`s not a full 5.1 Dolby Digital soundtrack, but the sound quality is excellent - Lloyd-Webber`s score is very well orchestrated and played, and the singing/dialog is very clear at all times. Surround effects are occasional, and almost unnoticable, but this is not the sort of film that needs a full 5.1 soundtrack.

The extras on the disk - or should I say lack of them - are the one downside to this otherwise excellent disk. You get the usual scene access... and, erm, that`s it. Disappointing, really - there are enough interviews and documentaries around, and I`m sure the producers could have acquired something for the disk. A missed oppurtunity.

Putting aside the lack of extras, this is an excellent filme on a good DVD. If you know the musical, you will know how good the score is, and the full treatment given to it by Alan Parker does it justice. If you don`t know the musical, then you should buy, beg, borrow or steal a copy anyway - it`s well worth a look.
posted by ShaunBoy on 5/3/2001 10:10