DVD
Larkins (The): The Complete Series 6

DVD
For the Love of Ada: The Complete Series 3
Related Articles 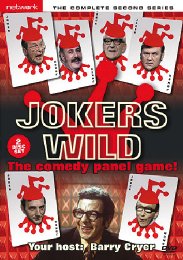 Synopsis:
THIS TITLE WILL ONLY BE AVAILABLE UNTIL 11 NOVEMBER 2012.

Running for five highly successful years, Jokers Wild is a lively, rapidly paced panel game in which two teams of top comics compete for laughs from a studio audience. While team members delve into their repertoires for winning jokes based on topics drawn randomly from an oversized pack of cards, bonus points may be scored by opposing team members if they interrupt mid-gag to complete a punchline.

Hosted by comedy legend Barry Cryer, the show's line-up is a Who's Who of British comedy talent from the 1970s; this second series features Ted Ray, Arthur Askey, Les Dawson, Ray Martine, Clive Dunn, Lance Percival, Jack Douglas, Graham Stark, Eric Sykes, Kenneth Connor, Alfred Marks, Professor Stanley Unwin and Ted Rogers, among others. Originally screened in 1970, this was Jokers Wild's most successful year, when series two, three and four were shown back to back on ITV in an exceptionally popular eight-month run!