DVD
How To Talk To Girls At Parties 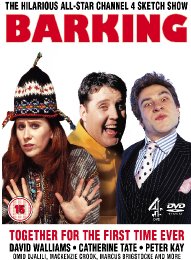 Synopsis:
Barking showcased some of Britain's most gifted and successful comedy talents, who have gone on to write or star in some of TVs most popular and groundbreaking comedy series including Little Britain, The Catherine Tate Show, Phoenix Nights and The Office.

In the late 90s a talented bunch of up-and-coming comedians put their comedic heads together and wrote an hilarious sketch show for Channel 4; the result was Barking and their names: David Walliams, Omid Djalili, Mackenzie Crook, Catherine Tate, Peter Kay, Dave Lamb, Rhys Thomas, Marcus Brigstocke, Matt Lucas, amongst others.

With brilliantly put-together sketches including David Walliams' deluded Royal tour guide, Mackenzie Crook's socially inept teacher, the doomed Vicars, the sniping airline pilots, the evangelical cyclist and Catherine Tate as half of the right-on couple who are so wrong, Barking is the side-splitting series that launched the careers of some of the best-loved comedy stars of today.