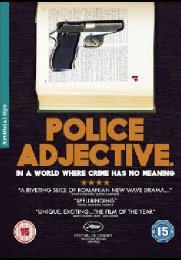 Blu-ray
Joan Of Arc: The Messenger

There has been something of a renaissance in Eastern European cinema in recent years with the best example probably being Romania which, in films like The Death of Mr. Lazarescu and 4 Months, 3 Weeks & 2 Days has managed to produce some critically acclaimed films which also address the country's difficult transition from Communism under Ceausescu to a fledgeling capitalist state. This trend continues in Police, Adjective which shows the antiquated bureaucracy and under resourced police system dealing with a brand new society.

Written and directed by Corneliu Porumboiu, Police, Adjective follows a police officer, Cristi, who has been following a young man, Alex, for weeks, if not months and all that to say doing is smoking some marijuana with a couple of friends. Because his file is getting thicker and thicker with every new report he files, pressure comes from above to close the case and arrest the teenager. Cristi considers this a complete waste of time as it would get them no nearer to discovering the source of the narcotics and would ruin the young man's life by sending him to jail for up to 7 years. 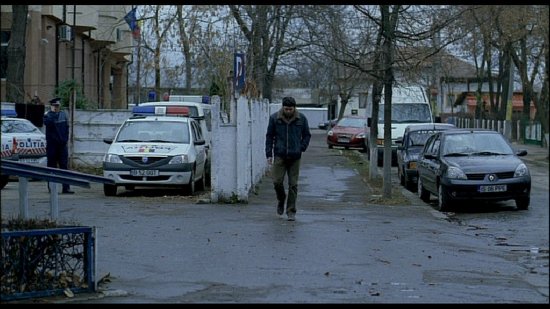 In order to try and swing the cogs of justice in his favour, Cristi begins compiling a dossier on the teenager, his friends, his brother and the 'grass' that led the police to Alex in the first place in the hope of tracking down the supply chain. As he heads to work every day in the same clothes, Cristi's doubts about the case continue and grow as he takes down Alex's parents' number plates and tries to find out more about them, where they work and if there is a history of criminal behaviour and family.

Meanwhile, his marriage, which is only a matter of months old, is bearing the strain as Cristi returns to an empty house, makes his own meals and his wife doesn't seem to exist. The first time we see her, she is not even in the same room as him but at her computer watching a video of a Romanian singer and listening to her saying the most incredibly banal pop song whilst Cristi sits in the kitchen eating alone. When he's finished in goes into the living room, she tries to explain why the song mean so much to her, but Christie just doesn't understand and that has nothing to do with the vodka and three beers he has drunk so far.

As if to accentuate the incredibly slow passage of time and the way that things happen so slowly, Corneliu Porumboiu uses minimal camera movement, frequently with it 'locked off' so you have incredibly long scenes with virtually no camera movement which allows your eyes to watch Cristi whilst taking in the whole environment and location. Sometimes, things happen at glacial speed but you get the impression that this is sometimes what some police work is really like when it is a case of just standing, watching and waiting to see if something will happen and, when it does, to go and collect the evidence before writing it all up. 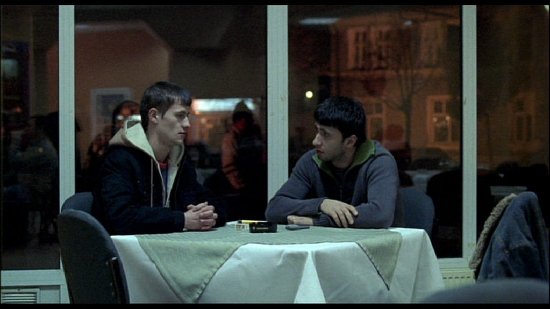 Tellingly, Cristi has to handwrite all of his reports despite there being a computer at his desk and you get the impression that the computer, with its enormous CRT monitor doesn't work and is largely there for display purposes. One of the final scenes is perhaps the longest as Cristi and Nelu, who shares his office, are summoned to the Chief Inspector's office and Cristi is quizzed about whether he will do the sting operation run whenever he says he won't, he is asked for a reason. Each reason requires a dictionary definition but there is no dictionary in the office so the Chief Inspector's secretary is despatched to find one. When they have a dictionary in the office, Cristi is forced to read out the definitions of 'conscience', 'law' and 'police', sometimes repeatedly until he's put in the position of taking part in the sting operation and remaining a police officer or handing in his notice.

As with the other Romanian films that I have seen in recent years, Police, Adjective unfolds very slowly and deliberately so you are familiar with the main characters, their situations and precisely what is going on with Christie and the case. This clearly won't be a film for everyone as those who are more accustomed to films with a great deal of action, comedy and raised voices may find themselves becoming irritated by the pacing. I didn't have a problem with this aspect of Corneliu Porumboiu's direction as it added to the viewing experience rather than detracting from your appreciation of the film. 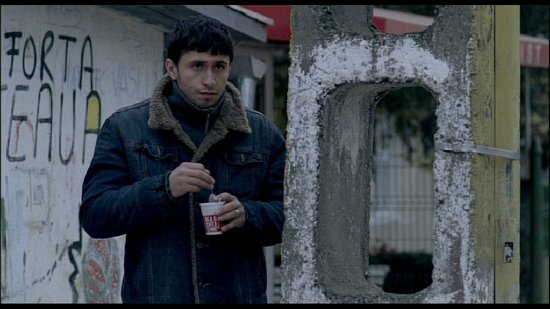 Extra Features
Interview with the Director Corneliu Porumboiu (14:45) isn't, as I thought it would be, in Romanian with English subtitles as Porumboiu speaks fairly fluent English and, although he is very quietly spoken, he speaks well about how the project came about, the film's structure and how his favourite films, Pickpocket and Blow up influenced him. 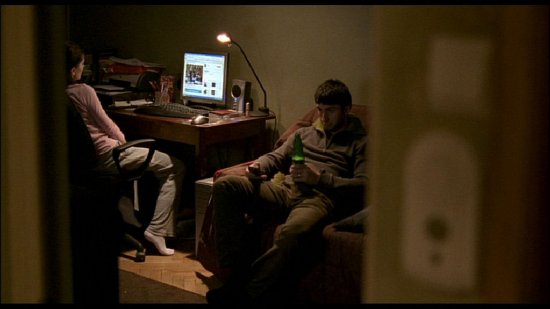 The Picture
The 1.78:1 anamorphic picture is very clear with good definition, clarity and contrast levels. I would love to wax lyrical about the colours but the palette and mise en scène is generally so muted and washed out that it borders on monochrome at times. Although Nelu can be seen wearing a red jumper, the final scene in the Chief Inspector's office features a rather comical moment when he uses a bunch of grapes as an analogy to try and convince Cristi to go ahead with the sting operation and his office is so bare and drab that the fruit bowl in the middle of the frame seems completely incongruous.

There is some occasional white spotting and moiré but these are very few and far between and the quality is quite high. The filming style doesn't demand a great deal from the image quality as the camera never moves quickly, there are no instances of cars moving pace, people running or explosions and I think the most complex scene was when there was a working computer monitor! 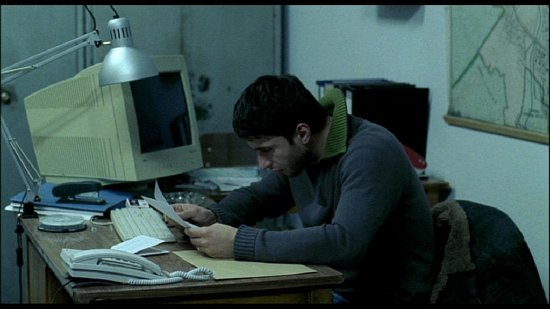 The Sound
Just as with the visual side of things, the audio is extremely undemanding but is nevertheless presented extremely well. There are numerous scenes with little or no dialogue and the first scene in which you see Cristi doing his job, the only sound is from the young children playing soccer in the foreground.

This would normally mean that the Dolby Digital 5.1 option would be entirely pointless as you may as well go with the 2.0 stereo but I actually found the surround track to have a little more clarity and the surround speakers did come into play with the atmospherics such as background chatter and cars passing in the distance. There isn't a great deal between them but, if you have the capacity to play a 5.1 track, go for that one.

Again, the most complex scene is that when Cristi's wife is listening to music as an uncomfortably high volume and you get the sense that he is fuming inside but manages to bottle up his feelings so as not to create a scene with his wife.

The subtitles are very good and free from any glaring typographical or grammatical errors. 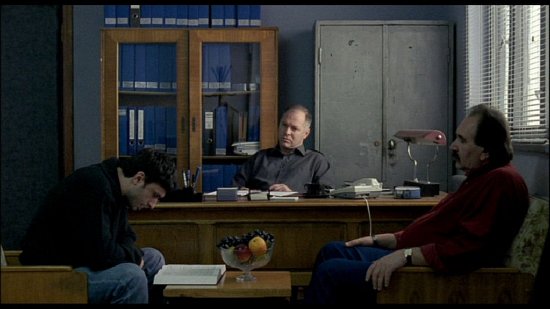 Final Thoughts
If you have enjoyed the recent output from Romania such as The Death of Mr. Lazarescu and 4 Months, 3 Weeks & 2 Days then this is certainly a title to check out as it is one that rewards the patient viewer who doesn't mind subtitles, a deliberately paced film and one in which there is virtually no action. It is a fascinating character-based drama with the state of Romanian law enforcement as a backdrop.