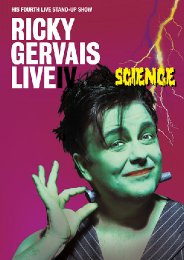 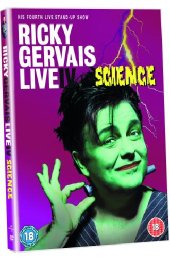 Blu-ray
The Hitchhiker's Guide to the Galaxy

Blu-ray
Ashens And The Quest For The Gamechild

As a big fan of The Office and Extras, I went into Ricky Gervais' first stand-up gig, Animals, with high expectations which it failed to meet as I was unconvinced by Gervais as a stand-up comedian. I haven't seen his next two stand-up DVDs, Politics and Fame but, assuming that he has grown into his role as a stand-up comedian rather than a television writer, director and actor (and on the back of seeing his brilliant feature film directorial debut,Cemetery Junction, which he made with long-time writer-director partner Stephen Merchant), I approached Ricky Gervais IV: Science with high hopes.

The show gets off to a rather odd start when Gervais, off-screen and in voiceover, talks about the creation of man and himself, with frequent references to his 'average' penis. It takes about five minutes before he appears on stage and well over quarter of an hour for him to even mention science and, for the bulk of the show, he talks about fat people, a "fat mental woman" he saw at a Ken Dodd gig and defends his use of the word "mong". There is also a fairly long section when he goes through a book calledMoses, which was a prize for attendance at Sunday School when he was very young, and pointing out all of the flaws in the story and saying that Moses looks a bit gay with a rather suspicious relationship with God. From this description, you will clearly know if the show is for you or not. 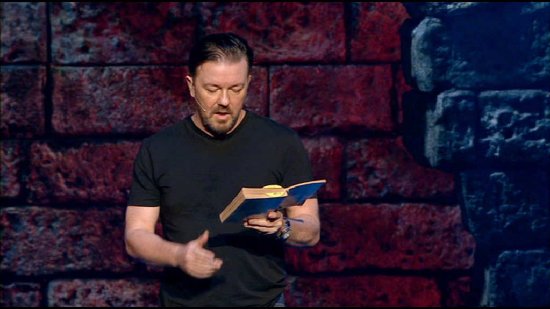 There is one occasion when he told a joke that even I thought was way off the mark and is not the sort of thing you would tell in public, let alone in front of thousands of people when you're being recorded for a DVD to be released for the Christmas period. There is also another joke that ends the main feature (the bit before the encore) that I've seen several times as a text message.

Although the audience clearly lapped up every minute of the show (despite being called "c***s" and "scum" by Gervais) and there are numerous quotes from eminent comedians (John Cleese, Larry David and Billy Connolly, to name but three) to give the impression that Gervais is some sort of comedy genius. I must be quite honest, I just don't get it and I know I'm not alone because I watched it with two others and neither of them thought it was at all funny. 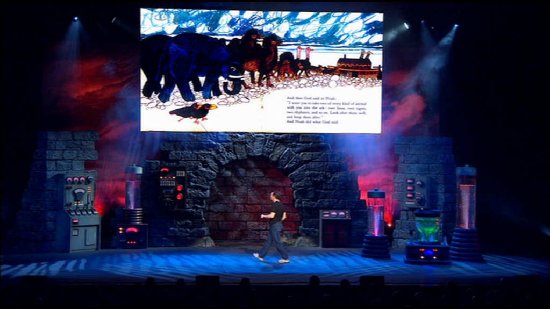 I'm not sure but, if you have given your show a title, shouldn't the majority of the material be about that topic? Gervais spent very little time talking about science as a serious subject and one to be analysed and skewered with topical examples but about half of the show talking about fat people, the difference between them and gay people, and how it is "their own fault" if they are fat, ignoring the fact that many people are overweight because of a psychological disorder or a thyroid problem. Not every 'fat' personal lives a sedentary lifestyle, eating food from a bucket or stuffing their face with pies during every waking moment.

Anyway, I digress. I'm clearly in the minority as Gervais' shows sell out extremely quickly and he is immensely popular on both sides of the Atlantic. The likelihood is that, if you liked Animals, Politics and Fame then you will like Science as well. I could see that some parts of his act were very well crafted with neat observations but I just didn't think they were particularly funny or in the same league as the best stand-up comedians I've seen. When he is going through the story of Moses and points out the problem of putting all of these animals together on one boat, I was reminded of exactly the same joke being told by Eddie Izzard many months ago on his Stripped tour which was released on DVD almost exactly a year ago to the day that this DVD (and BD) will go on sale. 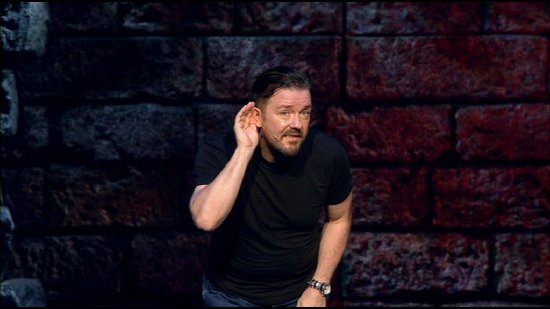 Extra Features
The first of these is Meet Karl Pilkington II (24:54) in which Ricky Gervais again sits down with his close friend and, by all accounts, the most stupid person he knows to discuss science. Although Pilkington is supposed to be this stupid one, he comes up with some extremely relevant points such as why should he spend his time worrying about The Big Bang when it has nothing to do with his daily life. It doesn't help that Gervais throws out random (and completely false) statistics like humans being 70% similar to slugs in terms of their DNA and asking Pilkington what he thinks of the similarity.

Karl Pilkington meets Warwick (18:32) shows Ricky Gervais' foil meeting up with the diminutive actor (who starred in Willow, Return of the Jedi and several of the Harry Potter films) and the result is extremely uncomfortable as Warwick Davis has clearly been brought on because Karl Pilkington is an insensitive fool who doesn't know what to say when he has Warwick Davis sitting on the arm of his chair and is asked if he would rather be tall or short. It is an extremely weird interview as they establish that Pilkington used a litter tray until he was at least four years old before talking about conjoined twins and what happen if he and Warwick were joined at the penis.

Finally, Ricky Gervais in New York (10:02) is a montage of the comedian on the David Letterman show, interviewing Jeff Garlin and Larry Davis on the set of Curb Your Enthusiasm (as Gervais has a guest appearance on the eighth season). This is really just a puff piece to illustrate that Gervais is popular in America, something that you should already know because of the number of Hollywood films he has appeared in and the number of times he mentioned flying to and from US or between LA and New York during the main feature. 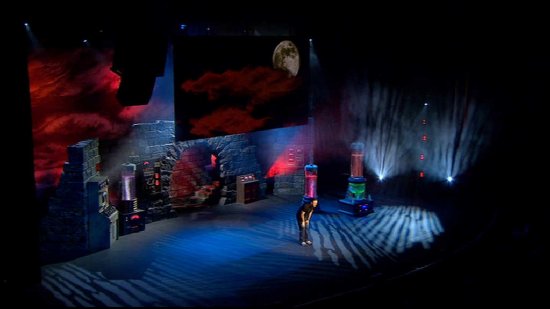 The Picture
The set is a really good one, clearly based on Frankenstein's Castle and laboratory but it's odd that Gervais really doesn't use this as part of his routine, only referring to Frankenstein at the beginning of the show when he is off stage. He does move around the stage quite a bit, often returning to a stand on the side where he keeps a can of Fosters from which he swigs every now and again. There is a large screen above the stage which shows the pages from the Moses book as he reads through them.

The Sound
The soundtrack is a fairly unremarkable Dolby Digital 2.0 stereo one which does a good job with the dialogue and the laughter and applause from the audience. Everything he says comes across clearly enough but there are English HoH subtitles for those in need them. 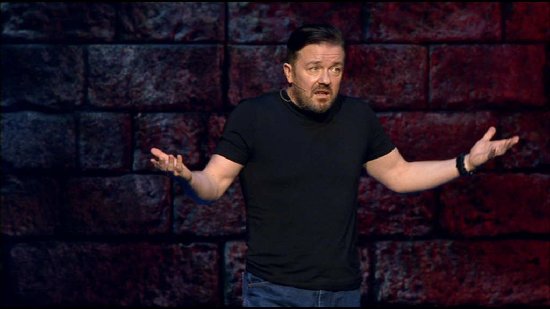 Final Thoughts
I imagine that, for a title like this, a recommendation either way will be fairly pointless as, if you like Ricky Gervais as a stand-up comedian or know someone who does, then you will buy this for yourself or for them as a Christmas present. If you don't like Ricky Gervais as a stand-up comedian then you are likely to give this a very wide berth.

It is worth noting that this is being released on DVD and BD and, although I thought the picture quality on Billy Connolly: Live in London 2010 looked very good in high definition, I'm not exactly sure that HD is necessary for a stand-up gig, particularly when the sound is only in SD Dolby Digital 2.0 stereo. That being said, I haven't seen this in HD so can't comment on the AV quality.