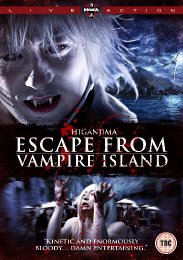 Please! Enough with the vampires! I thought that these things went in fashions, were cyclical fan preferences, but it turns out that the nineties vampire renaissance, with Anne Rice filling the bookshelves, and inspiring a whole heap of cinema, as well as the unforgettable Buffy The Vampire Slayer on television, wasn't just a flash in the pan. I thought with the premature demise of the Buffy spin-off Angel, that the vogue for all things vampy was coming to an end, but we can't get rid of the little bloodsuckers. Now teenage girls are squeeing in their droves for the Twilight movies, while more adult fare is accessible in the form of True Blood, and every other week, there is some variation on the vampire myth coming to our screens and televisions. I'm sure I didn't imagine a TV series about a vampire detective. Now they're invading other genres as well. What next, a vampire rom-com, with Hugh Grant in a cape, CSI Transylvania, a vampire home improvement show? You may get the feeling that I wasn't in the ideal frame of mind to review Higanjima - Escape From Vampire Island, released by Manga Entertainment on DVD and Blu-ray. On the other hand, Far Eastern treatments of the vampire myth vary greatly from both what we get in the West, and from each other. The rules for each vampire story can be vastly different, with many vampires unaffected by sunlight or crosses, and varying abilities and affiliations. There can even be vampires on the side of good in some stories. I've seen enough vampire tales in anime to take each story at its own merit, and Higanjima is based on a long running manga by Koji Matsumoto. This one bypassed the animation route though, and went straight to live action. 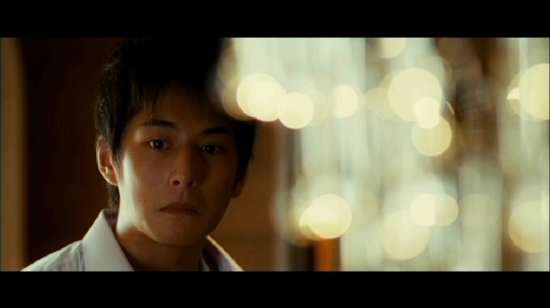 Two years previously, Akira Miyamoto's older brother Atsushi went missing with his girlfriend Ryoko. Now a mysterious woman approaches Akira, Rei Aoyama, who claims to have knowledge of Atsushi's whereabouts. Apparently he's on the island of Higanjima, fighting vampires. That's not the sort of statement that you take seriously, except Rei is being shadowed by a vampire that attacks Akira and his friends. Determined to help his brother, Akira decides to go Higanjima, and his friends insist on joining him, even though Rei isn't the trustworthiest of sources. No surprise really, as when they get there, the first thing that happens is that they are captured and taken into the dungeons, where they will be served up on a menu. Rei is in thick with the leader of the vampires, a charismatic man named Miyabi, who has dreams of world domination. They manage to escape, and learn that in the middle of all the lies, Rei did tell some truths. Atsushi really is on the island, fighting to free the surviving inhabitants, and if Akira and his brother can team up, maybe they can cleanse Higanjima of the evil once and for all. 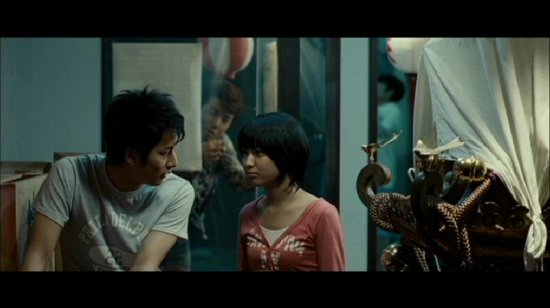 Higanjima gets a fairly solid transfer from Manga Entertainment, with a 2.35:1 anamorphic, film to PAL transfer. It's mostly clear and sharp, there's little indication of compression artefacts or aliasing, and certainly nothing as crass as ghosting or judder. But this is a film with a lot of dark scenes, and detail is never really a primary concern. It's also a movie where the action is of the close-up, shaky cam variety, and coupled with the darkness, there were times when I was hard pressed to figure out what was going on. Third is the egregious CGI, which begins with copious, and ridiculous blood sprays, graduates to a humanoid vampire bat that looks even more fake than the similar harpies in the Van Helsing movie, and climaxing with a giant comedy gargoyle. Still, the climactic sword fight is shot to impress. Sound comes in DD 5.1 and 2.0 Japanese, with optional English subtitles. The dialogue is clear, the action is represented adequately, and the sound design and music matches the film's fair production values. One oddity is that the subtitles have a distinctly British taint to them, with 'arsehole' instead of 'asshole' on more than one occasion. 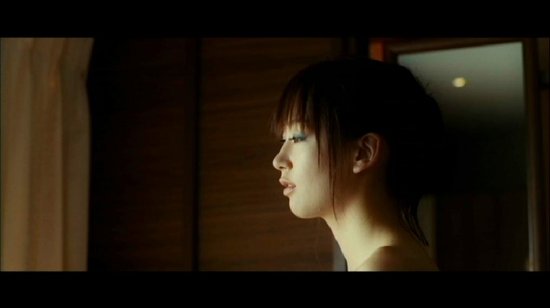 Higanjima gets a fair number of extras, impressive if you're into the promotional hoopla that surrounds any movie release, but pretty dull otherwise.

The Countdown Promotion lasts 8 minutes, and sees the film's cast at work on New Year's Eve selling the film.

Vampire Promotion lasts 2 minutes, and sees some of the film's bloodsuckers loose on the streets.

Kojinsha Screening lasts 9 minutes, and has more of the actors working the public. There is the Pusan International Film Festival featurette running for 4 minutes, the cast and crew getting together at the film's premiere (5 minutes), a Stage Greeting (7 minutes), and just to vary things a little, the film's Original Japanese Trailer.

Of course with films like this, you have to make do with what extras you can get, and even dull extras are better than no extras at all, right? 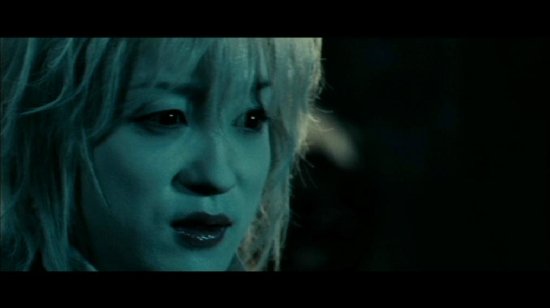 I may be getting tired of the traditional vampire genre, but when it comes to Horror, it's zombie movies that I loathe the most. Typically, Higanjima turns out to be more of a zombie movie than a vampire movie. There are really only four vampires with any character and individuality here, and only one with any vestige of charisma or that animal attraction that so makes teenage girls go squee. The rest of the island is populated by hordes of identikit, mindless bloodsucking automata, whose sole purpose in life is to chow down on any passing human, with no thought as to why or how, or indeed any semblance of self-preservation. In other words, zombies with fangs. The only difference is that you turn into a vampire if you ingest a vampire's blood. Merely being bitten by a vampire isn't enough.

Having said that, I did enjoy Higanjima - Escape From Vampire Island. It's fun. It's dumb, stupid, nonsensical balderdash, but it is fun with it. It has some appealing action sequences, and while the premise may be ridiculous, the plot daft as a brush, it also has some appealing characters, and the production values and character performances do elevate it above simple B-movie fare. 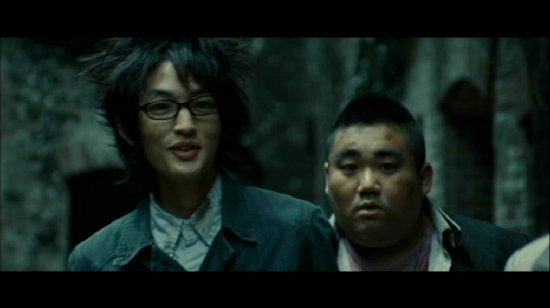 It has a lively start too, with the introduction of hero Akira quite deftly handled, as he flees from the brother of a jilted girlfriend and his gang. As he's chased through the halls of his high school and the surrounding streets, we get quick introductions to his friends as he runs past them, and there's an eighties high school comedy nostalgia in the way the scene is set and paced. His friends occupy the appropriate niches as well, while interesting enough characters in their own right to liven up the proceedings. There's the cool Ken, the girl that Akira's actually sweet on, Yuki, the nerd Nishiyama, the fat lothario Kato, and the wimp Pon. Then there is the tantalising and enigmatic Rei Aoyama, who's there on the mainland to find lunch for the vampires in the form of gullible tourists or businessmen, but is also taking the time to recruit some heroes to fight the vampires as well. Her meeting with Akira is provocative to say the least. She's certainly enough to get Akira thinking with his glands instead of his brain, while there's also a love triangle brewing among the friends, as Yuki is actually sweet on Ken, while Akira is left as a hapless bystander. 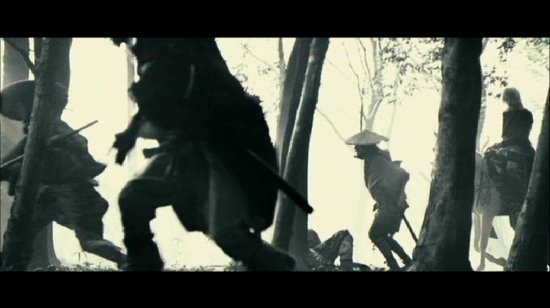 You'd think that the interpersonal dynamics would seem to promise an interesting film, and the variety of characters among the friends ought to result in some imaginative and varied ways of reacting to, and dealing with the vampires. Alas, when they actually get to the island, most of that is forgotten, and what we get is a lot of running around and screaming, until they can't take it anymore and decide to fight back. And with the shaky cam action sequences, things are too confusing to really let any of the individual characters shine, beyond Akira and Atsushi that is. I mean, the opening of the film shows Yuki practicing her archery while Akira is trying to escape the bullies. But does she actually fire an arrow at a vampire during the film? Great use of character there, guys!

The film also develops in a far-fetched way, which for a fantasy vampire zombie movie is saying something. You'd expect one or two twists or reversals in a film, but Higanjima seems to be composed entirely of plot twists, and it bends over backwards in trying to be unpredictable. But constant unpredictability becomes predictable in its own right after a while, and eventually you just become jaded to the next fantastic development. It's when the previously abandoned island revealed a band of resistance fighters, led by a masked giant that my brain gave up the ghost. 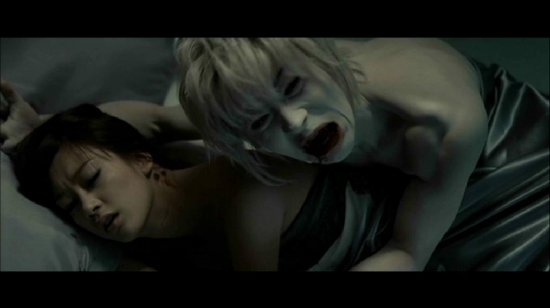 Higanjima - Escape From Vampire Island is stupid, but it's the kind of stupid that you can enjoy after a couple of beers and a kebab. The ending seems to demand a sequel. I hope they are able to resist that temptation though. I don't think I could bear anymore.